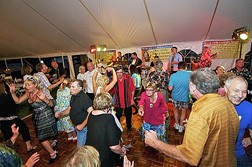 Cowboy hats and bandanas are the attire for the dinner and dance benefitting the Door County Humane Society (DCHS) on August 2 – Boot Scootin’ for the Shelter. This marks the fifth year the shelter has hosted its major fundraiser with a dance theme, but this year the event will be held at Harbor View Park in Egg Harbor.

DCHS Executive Director Carrie Counihan said, “We invite everyone for an exciting night of dinner, dancing and celebrating all of the amazing accomplishments of DCHS this year!”

Counihan commented that this event is crucial to the operating budget of the shelter, raising more than $40,000 for homeless animals in 2012.

The event begins at 6:30 pm, and will be held under a large tent – rain or shine. Madison-based band Whoz Playin? returns after several years. Beer and wine are included in the ticket price of $75 each. Table sponsorships, including eight tickets and marketing, may be purchased for $1,000. For tickets, call 920.746.111 or stop by DCHS or Sister Bay Trading.