In the photo, Bo Johnson is clad in the blue and gray of his Cal Ripken baseball team, striding toward home plate, his right hand about to release the baseball. It’s the picture a million parents take every day in the summer, the stock photography of the athlete’s parent. But this story is not in the image, but in the caption Bo wrote below it on the CaringBridge website.

“This is what I’m dreaming to be doing instead.” 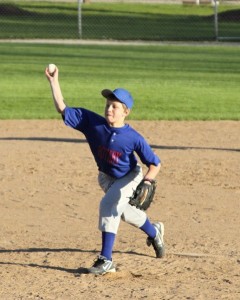 “This is what I’m dreaming to be doing instead,” reads the caption to this photo on Bo Johnson’s CaringBridge website. Johnson was diagnosed with Acute Myeloid Leukemia Oct. 8 and is at the Children’s Hospital of Wisconsin getting treatment.

On Labor Day, 12-year-old Bo Johnson of Sister Bay was looking forward to suiting up in the blue and gold of Gibraltar football, basketball and baseball. A fortuitous accident on a Jet Ski would quickly change his team’s colors.

Riding on the back of the Jet Ski, Bo’s leg slipped off the footrest and into the water. His leg whipped back, and as he whirled it back onto the footrest the conflicting forces tore muscles in his hip and broke his pelvis.

It was just the kind of freak childhood injury that happens to active young boys and girls. But a few weeks after it happened the leg didn’t seem to be healing as it should, and worse, Bo was experiencing excruciating shooting pain up and down his leg.

His mother Annika took him to Aurora Hospital in Green Bay for what turned into a battery of tests over four days. Five doctors administered blood tests, an ultrasound, a CT scan, and an MRI. At one point Annika thought he would need a hip replacement. The thought put her in tears.

“This kid eats, breaths and sleeps sports,” she thought. “Now he’s going to have a hip replacement?”

Now, she wishes that were all he had to endure.

“After four days the doctors told me they were baffled,” Annika says. “They said they had more equipment at Children’s Hospital, and they had better eyes for this sort of thing.” 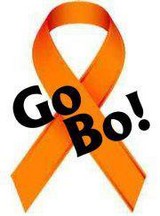 Within the hour Bo was in an ambulance heading for the Children’s Hospital of Wisconsin in Milwaukee. After two more days of tests, doctors performed a bone marrow aspirate – in which a needle is stuck into the bone to extract bone marrow – to confirm their worst fear.

On Oct. 8, Bo was diagnosed with Acute Myeloid Leukemia (AML), an extremely rare cancer that starts in the bone marrow and spreads to the bloodstream. Most common in adults, the cancer is diagnosed in roughly 500 children in the United States each year.

The luckiest of accidents

The Jet Ski accident had nothing to do with his leukemia, but it may have helped save his life.

“I don’t know how long it would have gone till we found out if it weren’t for that accident,” Annika says. The symptoms of AML are similar to common childhood ailments like the flu or growing pains. If symptoms had not manifested for a couple more months it might have been confused for a cold, a flu, or exhaustion. His leukemia may have established a stronger foothold.

Bo’s doctors are optimistic. After his diagnosis they immediately began the first of four debilitating rounds of chemotherapy, and so far he has responded well to the treatments.

Bo’s uncle Rolf Johnson says the first days since his diagnosis have been difficult for Bo, just weeks removed from the normalcy of middle school life.

“I couldn’t imagine what kind of pain the kid was going through,” Rolf says of those first days. “Nobody knew what was going on, and we’re doing all kinds of tests on him.”

Now the whirlwind of tests has subsided, and Bo’s adjusting to the the long chemotherapy rollercoaster ahead of him. Rolf knows this road. Fourteen years ago he was in this same hospital with his wife Lori, who fought and beat breast cancer. His brother Lars has fought skin cancer, and a little more than a year ago the siblings lost their father, Al, after a long battle with cancer. 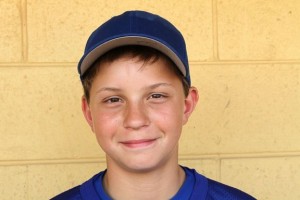 Rolf is a stocky man, with a thick mustache and a throaty voice that could win a fight on its own, but his toughness fades as he talks about Bo’s battle. Rolf is one of many male figures in Bo’s life (Bo’s biological father lives in Hawaii), part of the large support network that evolves in small towns where neighbors are family.

The leukemia diagnosis didn’t surprise Rolf – he had a sinking suspicion after talking to friends in the medical field about the test results – and after taking the punch he set about preparing Bo to punch back.

He knew Bo’s hair was going to fall out and urged Bo to get a step ahead of the chemo.

“You gotta get ahead of this thing,” Rolf told him, “or it’s going to start falling out in clumps. Then you’re going to say ‘look at what it’s doing to me.’ But if you shave it off, you’re in control.”

“He’s got a little Vin Diesel look going for him now,” Rolf says. “He looks tough.”

Annika says Bo is starting to grasp the severity of his illness as he sees the physical effects – the hair falling out, the fatigue, the muscle atrophy. Rolf says your head could spin looking at all the information about AML and the odds of survival, but he has no odds.

“These percentages don’t mean a whole lot to me right now because this is one person, and it’s either 100 percent or it’s not,” he says. “What’s the cure rate in Bo Johnson? It’s 100 percent.”

“He had a lot of anger, a lot of fear,” she says. “But he’s getting better. In the last week he has made so much progress. Rolf kind of hammered it into him that he has to fight this, that he can’t give up.”

He has also been inspired to fight by the incredible outpouring of support from his classmates. His new team color is orange, the color of the ribbon to show support for leukemia patients, a color that is rapidly blanketing the Northern Door community.

Within days of hearing the news his Gibraltar classmates started a GO BO! campaign, selling orange ribbons and bracelets to raise money for Bo, starting a GO BO! Facebook page, and buying up orange shoes and shoelaces in bunches.

Bo’s CaringBridge site, where friends can read his journal and post comments and support, has received 6,500 visits, many from people he’s never met. They’ve heard his story, or they worked for his grandfather at Al Johnson’s restaurant decades ago.

He asks his mother why he’s getting the attention, unsure how to take it in. But Annika said it has meant the world to Bo and her. The cards move them to tears and help Bo through the inevitable bad days. Though the family has good health insurance, the funds that have been raised will help Annika stay with Bo through his treatments and keep him comfortable in the long months away from friends and family. (Read “Redefining Lucky,” to see why a mother and son battling for life call themselves lucky.)

Rolf says he told Bo he is incredibly lucky to have the friends that he does.

“You’ve got this team around you Bo,” Rolf told him, “and they’re giving you the ball, it’s up to you to run with it. You’re down 10 points with two minutes to play and you gotta make ‘em back fast. You’re on your last legs here and you’ve got to understand it. You can’t lose.”