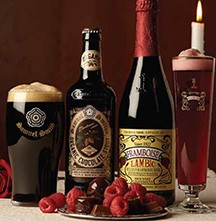 I don’t dig holidays. They just interrupt the work schedule. But if I had to pick a favorite holiday, I guess it would be Guy Fawkes Day. As John Lennon once sang, “Remember the 5th of November.”

My least favorite holiday is probably Valentine’s Day. Valentine might have been a priest beheaded on Feb. 14 in the year 269 by Emperor Claudius the Goth (Claudius II) for some long forgotten infraction, but apparently enough confusion surrounds his identity that the Catholic Church quietly removed him from liturgical veneration in 1969. No one ever mentions that, do they?

Well, I could rail on all day about the ironies of St. Valentine’s Day, but I’d be wasting all our time if I thought I could change anyone’s Hallmark-oriented mind about it, so I will just cave in and tell you about an interesting beery pitch aimed at the heart of Valentine’s Day celebrants. I do so mostly because it sounds very tasty – I have yet to try it myself, but I will – and wouldn’t want anyone to wait for a misbegotten holiday to share it with a friend.

I’m talking about the melding of two great Euro beers. The idea for melding them on Valentine’s Day came from their American importer, Merchant du Vin of Seattle. Because I admire the work of Merchant du Vin and the beers they import, I give you their full pitch verbatim:

“Chocolate & Raspberries ‘For That Occasion’ – especially when that occasion is Valentine’s Day!

“Samuel Smith’s Old Brewery at Tadcaster, one of England’s few remaining independent breweries, was founded in 1758 and is the oldest in Yorkshire. Their Organic Chocolate Stout, introduced in 2012, melds the full, roasty flavor of stout to chocolate:  it’s a lush, tasty, beautiful ale.

“Lindemans Brewery, established in 1822 and still run by the founding family, brews lambic ales – fermented exclusively via wild, airborne yeast – in the Belgian countryside outside Brussels. There is a reason Lindemans Framboise Raspberry Lambic outsells all other lambics in the U.S.:  it’s the perfect combination of complex depth from wild yeast and sweet, aromatic raspberries.

What could be more perfect for Valentine’s Day? Blend the two beers! Put 2-3 ounces of Lindemans Framboise into a pint glass, then top it off with Samuel Smith’s Organic Chocolate Stout. The deep notes of roast malt and chocolate marry beautifully with profound, aromatic raspberry – try it! Look for retail stores, bars and restaurants to be offering these lovely beers in the month of February; our website retail search will help you find a place to buy these beers near you.”

So, there you go. I know I will be trying this soon, but not on the appointed day. It does sound good enough to make it my official Guy Fawkes Day beverage.

I don’t watch football or the Super Bowl, but I heard plenty about Anheuser-Busch’s dumb Budweiser Super Bowl ad in which they attempt to skewer craft brewing. It’s a ridiculous move for a company that has been looking for every way it can to get its big, dumb fingers in every piece of the craft beer pie, from its attempt at craft brewing with the execrable Shock Top brand, to investing in successful craft breweries such as Redhook, Widmer Bros., Goose Island, and a Seattle Brewery called Elysian, which actually makes a Pumpkin Peach Ale, one of the craft beers the dumb Bud ad attempted to spoof.

It would be so easy to turn around and make fun of them, but instead of vilifying the mega brewers of America who decided we should all drink uninspiring lager, we should thank them, for the craft beer evolution/revolution might never have happened without their steadfast devotion to bland beer.