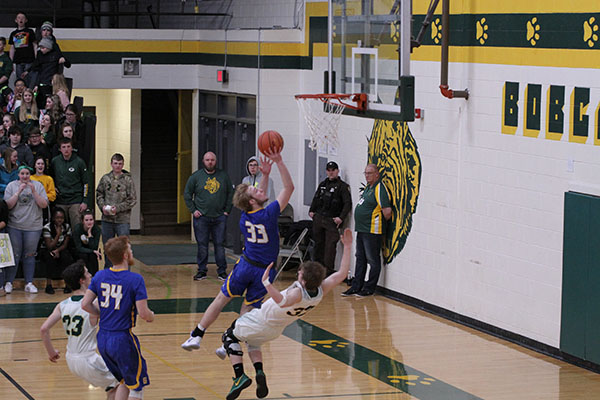 Pardon Southern Door’s Kyle Daoust if he is having a hard time thinking about the scoring records he has eclipsed this season.

Daoust scored 24 points Saturday to pass coach Derik Hawkey and move into second place on Door County’s all-time scoring list, trailing only former Southern Door standout Nathan Vogel. But it was the Eagles’ 52-42 win over Kiel in the Division 3 regional boys basketball semifinal Friday that had Daoust most excited.

“Absolutely [the scoring records] are buried in the back of my mind at this point,” said Daoust, who has 1,539 points and needs 28 more to pass Vogel at 1,566. He passed Hawkey on a three-pointer midway through the first half, and announced after the game that he will play at UW–Eau Claire next year.

“Every night we have a task at hand and that’s to survive and advance,” Daoust added. “Individual accolades are nice, but it’s a win or go home season.”

While Daoust was quick to temper his excitement about the new scoring mark, Hawkey was complimentary of his senior leader.

“I’m so happy for Kyle,” Hawkey said. “I always so he is like a mini-me, so him passing the record with me coaching him is amazing.”

Kiel seemed poised to run away with the game early in the first half. The Raiders went on a 14-5 run to take a 21-11 lead with 7:00 left in the period. Kiel hit 6 of 7 shots to start the game, including four three-pointers, and had the momentum.

“We did a much better job the rest of the game closing out on their shooters and running them off the three-point line and making them drive, which they aren’t as comfortable doing,” Hawkey said.

The Eagles host last year’s state runner up Valders tonight at 7 pm in the regional final. The Vikings, who beat Kiel twice during the regular season, have eliminated  Southern Door from the playoffs the past three years, including a 64-50 win in the sectional semifinal last season.

“It’s a pride game,” Daoust said. “It’s time to get over the hump, take the next step and continue peaking at the right time.”

Gibraltar moved one step closer to the first regional title in school history with a 70-41 win over Florence in a Division 5 regional semifinal on the road.

“We had great energy throughout the game,” said Gibraltar coach Justin Burress, whose team led 34-23 at halftime. “Our goal was to hold them under 45 and we did. Offensively we took what the defense gave us and worked well as a team. We played under control the entire game and also controlled the tempo.”

The Vikings play at No. 1 seed Phelps tonight for the regional title. The Knights beat Gillett 63-51 in the other regional semifinal. The Knights defeated Florence twice in the regular season by a combined total of five points.

“Phelps is a very similar team to Florence with good outside shooters.” Burress said.  “We need to play solid defense and not allow large scoring runs. We feel confident going in. I think the guys are playing with a little chip on their shoulder.  We thought we deserved a three or four seed, so we are out to make a point.”

Denmark jumped out to a 22-10 halftime lead and went on to beat Sturgeon Bay 54-36 in a Division 3 regional semifinal.

“I thought we played very well defensively tonight,” said Clippers coach Jim Benesh, whose team finished 13-11 overall and 9-7 in the Packerland Conference. “We just struggled to get any rhythm on offense. Unfortunately we shot poorly.”

“I really enjoyed this group,” Benesh said. “I will miss the seniors. Overall I thought the season was a success.”