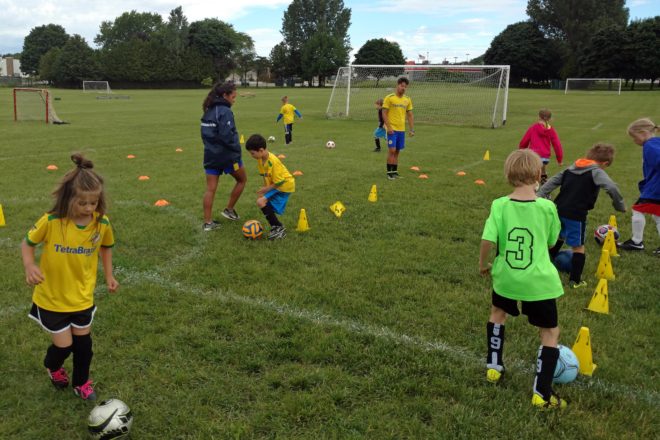 Youth soccer players worked their way through an obstacle course during the TetraBrazil Soccer Camp in Sturgeon Bay. Photos by Justin Skiba.

The excitement of Brazilian soccer came back to Door County June 19 – 23 when area youths experienced the unique Brazilian-style of soccer at the TetraBrazil Soccer Academy. The camp returned for the second year to John Miles County Park and featured four Brazilian soccer coaches.

Participants learned several soccer skills and techniques, including the Brazilian “give and go,” passing, dribbling, and scoring. Players worked on conditioning as well as game tactics that included the Brazilian box formation and triangulations, combination plays, and changing the point of attack.

The younger participants in the half-day camp received training on the basic skills of soccer. Coaches were particularly focused on refining player skills, introducing the fundamentals of teamwork, and encouraging fun. Coaches also introduced players to the Portuguese language by teaching participants a few words each day.

Carlos Azevedo, 26, is in his third year with the TetraBrazil Soccer Academy. After growing up in Portugal, he has since lived in London, England, for the last two years working, as a match analyst for the Leyton Orient Football Club. Playing club soccer in Portugal since he was five years old, he began coaching at age 16 and continues to spend his summers in the United States coaching youth camps.

Azevedo commented on his time in Sturgeon Bay this week. 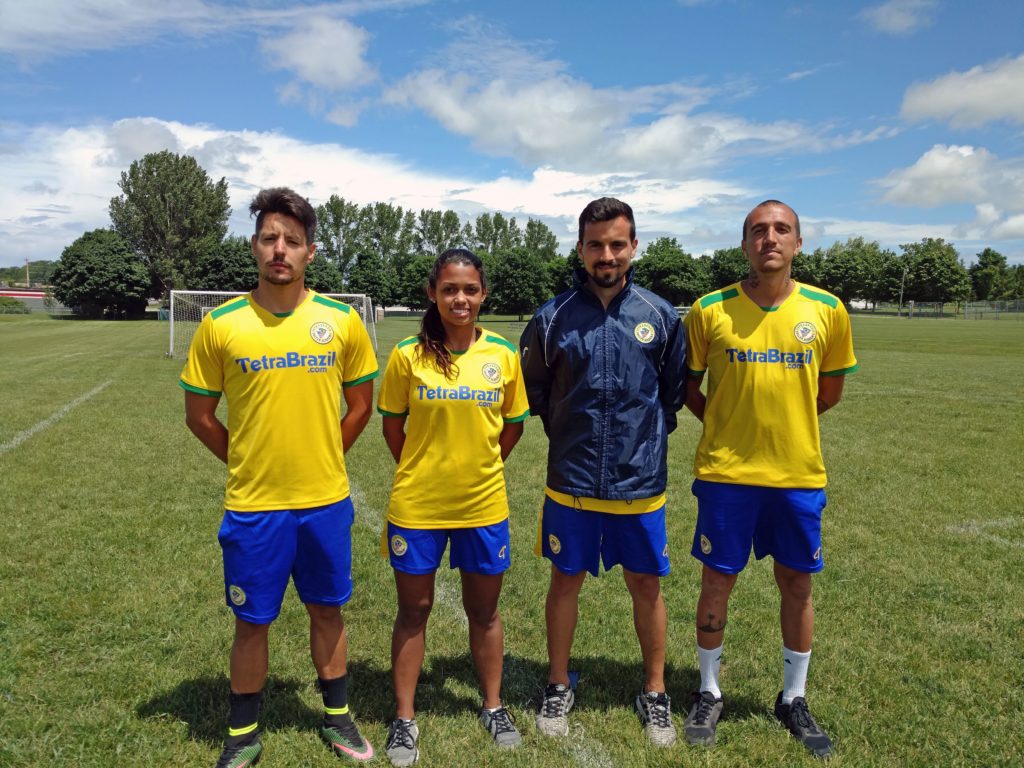 The TetraBrazil Soccer coaches spent the week working with area youths on improving their skills and introducing the Brazilian style of soccer. (From left) Duarte Grego, Melinda Sudré, Carlos Azevedo, and Renan. Photos by Justin Skiba.

“I really like it,” he said. “It’s not a very busy city. It’s beautiful. This is life quality and the kids are awesome.”

Also from Portugal is Duarte Grego, 30, in his third year as a coach with the program. He has degrees in sports science and nutrition, and has spent his life playing and coaching soccer in his home country and in America. He coaches for the Union Nogueirense Football Club in Porto, Portugal, and sees himself coaching soccer for years to come.

“I want to be a coach definitely,” he said. “I invest a lot of my time in soccer. I want to grow in soccer to arrive at the best soccer teams in Portugal and eventually around the world.”

Melinda Sudre, 22, of Juiz de Fora, Brazil, is in her first year coaching TetraBrazil Soccer. She attends the Federal University of Juiz de Fora where she plans to earn a physical education degree. She had previously played and coached for club teams since she was 10 years old.

“I like it here,” she said. “It’s very beautiful with very kind kids.”

Renan, 27, spent time working with clubs in Brazil and Uruguay. A veteran with TetraBrazil, he is in his seventh year working in the program. In recent years, he has spent the majority of his time in Sun Prairie, Wis., where he coaches U-12 boys and U-14 girls club soccer teams in the fall and spring. He returns to Brazil from November to March before heading back to Wisconsin to continue coaching.

“I think it’s amazing,” he said of Door County. “I look forward to visiting all of the places that I’ve seen in the pictures.”

While the coaches enjoyed their weeklong stay in Door County, several of the participants enjoyed experiencing the Brazilian soccer culture here at home.

Sevastopol fourth-grader Finn Mathews participated in the program for the second year.

“I really like it because last year I was with the little ones, but this year I am with the older group which is more work,” he said. “That’s OK, because soccer is hard work.”

“I enjoyed learning and having fun at the same time,” he said. “It was a lot of fun.”