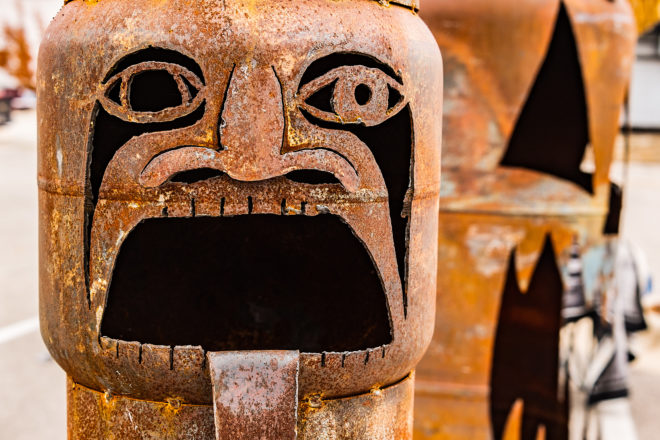 Inspiration came by way of a flooded fire pit. A few years ago, welder Charles “Chuck” Tlachac of Forestville was on unemployment after Palmer Johnson closed their Sturgeon Bay facility. He took the time to embark on some home improvement projects. On the list: fill in the fire pit.

“Every time it would rain, the pit would fill up with water. So I thought, ‘I like having fires outside, I’m not really too keen on that pit anymore,’” remembered Tlachac. He filled in the pit and started playing with the idea of adding a chimenea to his backyard, but he wanted something unique with a bit of fun thrown in. He enlisted the help of his daughter, Mackenzie. 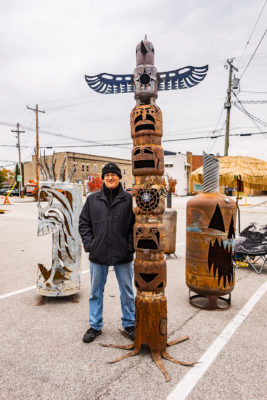 Charles Tlachac stands next to his 10-foot totem pole at the Sturgeon Bay Farmers Market.

“I like the look of the terracotta chimenea, but I wanted something that’s more durable, ’cause terracotta is very fragile,” said Tlachac. Combining a love of welding, a fascination with Hawaiian culture, and the designs of his daughter, Tlachac began creating a cast of chimenea characters with old water heaters, propane cylinders and well pressure tanks.

“I’ve always liked Hawaii,” Tlachac said of his main inspiration. “I’ve always wanted to go. I’ve never been there, but I thought, let’s bring Hawaii here. I love the big tiki faces, that ancient look, that Polynesian look. I thought, ‘Let’s give the faces more depth and put a fire in them.’”

When a fire is roaring inside, the faces truly come alive and captivate anyone within sight. They even seem to give off a personality, which Mackenzie oversees when her father is creating. “She lets me know if they look too angry,” said Tlachac, laughing.

After a year of creating a series of chimeneas, Tlachac’s brother-in-law stopped by his home one day. “He was looking at them, just staring at them,” remembered Tlachac. “He didn’t say anything for probably 15 minutes. I was like, ‘Is everything okay?’ He looked at me and said, ‘You have got to start building and selling these ’cause these are pretty cool and I’ve never seen anything like this before.’ And he’s a smart person. So I was like, ‘I’m gonna listen to smart people.’” Tlachac laughed.

Tlachac started scouring people’s backyards for materials. “But they didn’t really care for that too much,” he said, laughing. He now gets materials from the local scrap yard and will happily take an old water heater off your hands. “I like to think I’m giving them a better life,” he said.

He and his daughter started to venture outside Polynesian design elements, adding classic jack-o’-lantern faces and a series of animals for a ten-foot totem pole of propane cylinders. 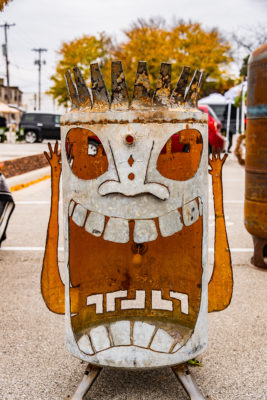 “I’ve been a fan of Halloween for many years,” said Tlachac. “It’s not uncommon to see at least a dozen carved jack-o’-lanterns in front of our house.” The inspiration for the various animals represented came from their personal experience – the blue jays who visit their yard and a painted turtle they rescued from the road. Though you can’t put a fire in the totem pole, Tlachac recommends lighting citronella candles in the tanks, “Because the state bird is still quite lively,” he said, smiling, “the mosquito.”

The main tools Tlachac needs to create his chimeneas: “a good imagination,” he said. “Mackenzie is quick about designing. We sit down, just design something, and go from there.” Their next goal: a 40-foot totem pole.

Taking an hour here or there in his free time from working at NEW Industries in Sturgeon Bay and attending Mackenzie’s athletic events at Kewaunee High School, Tlachac, armed with a plasma cutter, finishes a piece in a few days. “When my plasma cutter is working properly, you can get a real nice clean cut. Mine, for some reason, doesn’t really like corners, that’s why you get kind of a rough cut,” he said. “But I don’t mind the rough cut, it gives it character.” When the plasma cutter isn’t working, he brings out the oxy propane torch. “It can be dangerous if you don’t do it properly,” he admitted.

Under the name of CT Fire, Tlachac shows and sells his chimeneas at the Sturgeon Bay and Baileys Harbor Farmers Markets, and his own home. “I had four times as many people come to my house as last year,” he said. “People come to the gas station and ask, ‘Do you guys know where the fire guy is?’”

He does custom work. He delivers anywhere in Door and Kewaunee Counties free of charge. Eventually, Tlachac hopes to try selling at the markets in Green Bay, Appleton or Madison. “Maybe one day my hobby will be my income,” he said.