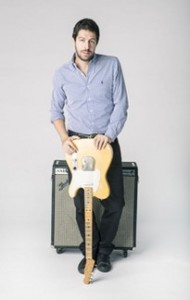 Among the stellar lineup of blues musicians who will make their way to the tip of the peninsula for Ellison Bay’s second annual Blues on the Bay on Aug. 29 is Chicago bluesman and frequent Buddy Guy’s Legends headliner Breezy Rodio.

The Italian blues guitarist and singer has been playing the blues for more than half his life, a convert from classic rock whose chance meeting with blues singer-songwriter-guitarist Linsey Alexander has led to a successful career as an international blues player.

Breezy got his start in the New York scene before deciding to go for broke and make his way to Chicago, a major risk he says has definitely paid off.

Describing himself as a musician who tries to “give it a little bit of myself but also…keep the tradition going,” Breezy has been at the top of his game the past five years, creating his own band (Breezy Rodio band) and releasing two albums: Playing My Game Too (2011) and the No. 1 Chicago Blues chart-topper So Close to It (2014). As the leader of Alexander’s band, he has also worked on three of Alexander’s albums: If You Ain’t Got It, Been There Done That, and Come Back Baby.

The Peninsula Pulse recently caught up with Breezy, who just hours before the Aug. 18 interview had signed a distribution deal with Universal Music Group. Here is what Breezy had to say about the blues, his influences, and what’s to come:

Alyssa Skiba (AS): What is your first memory of the blues?

Breezy Rodio (BR): Like every guy my age when I was a teenager, I got into rock music – Led Zeppelin and Black Sabbath and Deep Purple. Then eventually I went back to the roots until I moved to Chicago and I discovered Albert King, Muddy Waters, Jimmy Rogers, Jimmy Reed, Little Walter … and that’s what really got me into it. That’s when I really started devoting myself to the genre and to the instrument.

AS: What drew you to the genre?

BR: Blues is soul music. It comes from your soul. You can relate to blues music because it’s easy to understand and the music and lyrics are catchy. I guess the simplicity but also the deepness of the music is what got me going.

AS: What musicians have had the most influence on you?

BR: Definitely B.B. King, Nat King Cole, Ray Charles, Lurrie Bell, those are definitely some of my biggest influences and then when I moved to Chicago, I met a lot of really great musicians who I was lucky enough to study with. Guy King was one of them who taught me a lot, in terms of playing the guitar and music wise, and Billy Flynn, who will be on the same bill at the festival with me.

AS: You have been playing music with Linsey Alexander for a number of years. How did that come about?

BR: Me and Linsey, we go way back. That’s the guy I grew up with musically because he’s the first guy who gave me an opportunity to play on stage. I was a little boy pretty much when I started with him, I was in my early 20s and I really had a lot to learn – I still do, but I was very green. Linsey, at the time, was working everywhere. We traveled the world together; we went to South America, Canada, Europe, all over the United States. We were playing 35, 40 shows a month and I did that for 10 years. In terms of musical experience and hours on stage, that’s money in the bank for a musician because the experience you get on stage, that’s very valuable. Linsey gave me an opportunity to shine, to learn a lot about the music business, how to lead a band, and how to be a better musician.

AS: When did you start your own blues band?

BR: I started my blues band (Breezy Rodio) in 2010 when I was still with Linsey. I released my CD called Playing My Game Too and it went pretty good because I had a lot of known artists on it, like Lurrie Bell, Bob Stroger, Rockin’ Johnny, and I started hustling the first gigs here and there, like at Buddy Guy’s Legends and the House of Blues and slowly but surely I was able to be a regular at those clubs and then eventually became a headliner with my band on a regular basis.

AS: Describe your style.

BR: I love to pay tribute to the old guys who were great composers and great musicians. It’s a mix of old school and new school.

AS: You cover a lot of songs on your albums – what covers does the audience best respond to?

BR: “You’re Just About To Lose Your Clown,” by Ray Charles, that’s a song that people really enjoy all the time. It’s an oldie, it’s one of the first Ray Charles songs and it’s very unknown. I’m not aware of a lot of people who know that song. In fact, a lot of people think it’s my song because they’ve never heard it before … “Too Lazy” by T-Bone Walker and “When My Heart Beats Like A Hammer” by B.B. King … when we hit the first few notes of that one, people kind of go crazy.

AS: Where do you go from here?

BR: Things are moving kind of fast for me. To be honest with you, I’m very overwhelmed by all of this because I was not really expecting all of this. I’m doing Japan in October and then I’m touring all South America in November and then Europe in December, and … I was thinking, wow, this is really happening and I’m not really sure how I got to that point. I’m definitely very thankful for what’s happening and I guess after years of dedication to music and the instrument, learning and paying dues, eventually it will pay back and as I said, that’s an old B.B. King line, “Good things come to those who wait.” And that’s definitely my case. I’m still waiting, obviously, but I can say that if you don’t give up and you’re devoted to the music, eventually things will happen.