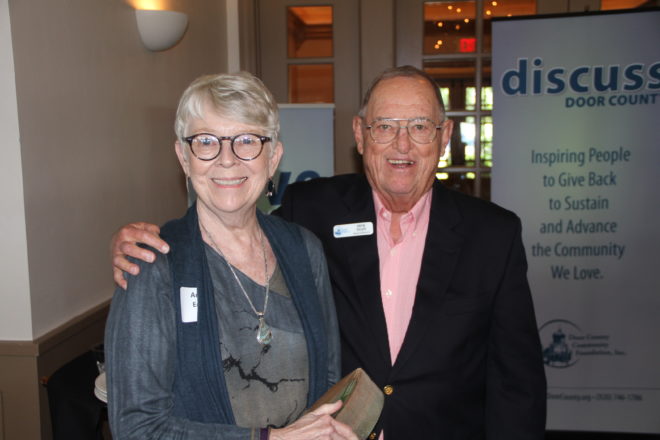 At our community’s recent Celebration of Giving, the Door County Community Foundation recognized Annie and Dick Egan as the 2016 Philanthropists of the Year. Each year, I am humbled to have the opportunity to share a few thoughts about the remarkable people who are given this honor.

As I often do when preparing a few comments, I start by re-reading the words of people who are much more thoughtful and insightful than me. I was recently revisiting David Brooks’ book, The Road to Character when I was struck by a particular passage that I had highlighted some time ago.

Brooks was writing about those rare people you come across who seem to possess what he calls an “inner cohesion.” Brooks writes, “After you’ve known them for a while it occurs to you that you’ve never heard them boast, you’ve never seen them self-righteous or doggedly certain. They aren’t dropping little hints of their own distinctiveness and accomplishments.” I didn’t realize it when I originally highlighted this paragraph, but Brooks is writing about people like Annie and Dick.

I have played a tiny and tangential role helping facilitate the Egan’s generosity going back to my time working in Green Bay nearly 20 years ago. I’ve been to numerous meetings, dinners and receptions they’ve hosted for charities in our community. I’ve stayed with them in their home in Florida on several occasions. I’ve even helped Annie hang artwork and gone to baseball games with Dick.

Yet in all the time I’ve known them, never once have I heard them boast, nor seen them self-righteous or doggedly certain. Nor have they ever dropped the tiniest hint of their own distinctiveness or accomplishments.

As Brooks says, couples like Annie and Dick, “radiate a sort of moral joy. They perform acts of sacrificial service with the same modest everyday spirit they would display if they were just getting the groceries. They are not thinking about what impressive work they are doing. They are not thinking about themselves at all. They just seem delighted by the flawed people around them. They just recognize what needs doing and they do it.”

This is not to say the Egans are perfect or have never faced struggles or difficulties of their own. I have been honored to hear of some of those trials and been given the opportunity to learn from their experiences. Yet, it is precisely those internal struggles that has made Annie and Dick into the generous souls we celebrate today.

In his book Falling Upward, the Franciscan Friar Richard Rohr writes that, “One of the great surprises is that humans come to full consciousness precisely by shadowboxing, facing their own contradictions, and making friends with their own mistakes and failings.”

We’ve all heard the famous Serenity Prayer that was popularized as the mantra of Alcoholic’s Anonymous. The saying goes, “God grant me the serenity to accept the things I cannot change, the courage to change the things I can, and the wisdom to know the difference.” This is actually paraphrased from the original Serenity Prayer written by theologian Reinhold Niebuhr.

Since I was little boy, I’ve always had great difficulty accepting the idea behind the Serenity Prayer. I do hear wisdom in the words. Some kinds of sorrow we have no choice but to accept, as when a loved one suddenly dies or a cherished relationship ends. Even in the public sphere in which I work, there are times when our most admirable efforts fail to bear fruit. In some circumstances, continued resistance can do more harm than good.

Yet I deeply value wisdom. And I have great respect for those with courage. To simply give in, to acquiesce, to settle for being passive spectators is to accept things as they are as if that is the way they are destined to be. I have always believed that acting on our convictions, even in the face of seemingly insurmountable obstacles, helps broaden the horizon that defines the limits of what is possible.

Yet when I read Paul Loeb’s book, The Impossible Will Take a Little While, I finally recognized that my discomfort was born out of my own misunderstanding. He writes, “The Serenity Prayer is too easily misread as a gospel of resignation. That’s because it’s impossible to predict precisely what people can and cannot change. Wisdom comes not from anticipation but from action. The only way to find out what’s possible is through our deeds. And that’s true whether we’re tackling issues that affect the whole world or just our neighborhood.”

To read the future as already determined, be it implacable darkness or rosy dawn, is to give up on precisely that which can make the greatest difference – giving our all to the present. As Loeb notes, since we never know when one of our seemingly modest acts might help change history, or inspire someone else who will play a key role, we’d do well to savor both the journey of engagement itself and the everyday grace that we can draw on along the way.

Hope is not the conviction that something will turn out well. Rather, hope is the certainty that some things makes sense regardless of how it turns out.

My friends, Door County is the community we love. We have been blessed with the abundance provided by those who came before us. We are now entrusted with the stewardship of the community we have among us. And we are being given the opportunity to nurture a better future for those who will follow us.

In all sincerity, I have never met a couple that better exemplifies this idea than Annie and Dick Egan. They are my inspiration.

Bret Bicoy is president & CEO of the Door County Community Foundation. Contact him at [email protected].