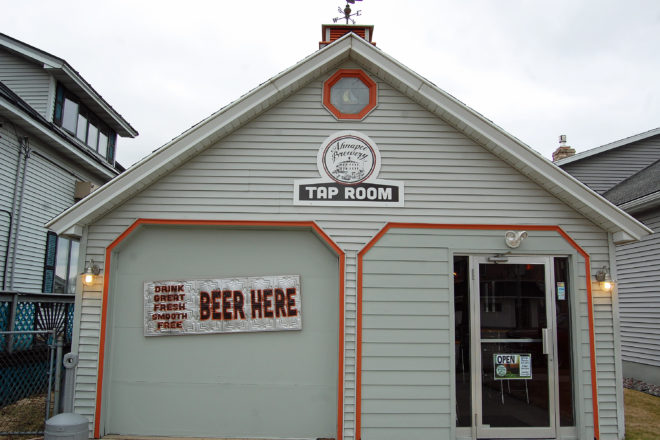 Anyone who has tasted the beers coming out of Ahnapee Brewery knows brewmaster Nick Calaway, 35, wears many hats while brewing – artist, scientist, explorer, historian, educator.

Since opening in a former two-stall garage the summer of 2013, Calaway has brewed clean, crisp, true-to-style beers alongside delicious experimental beers such as Wheat Wine and the just-released champagne beer called Brut Force.

The City of Algoma – population 3,126 – is now prominent on craft beer fan maps thanks to Calaway’s single-minded devotion and attention to detail. 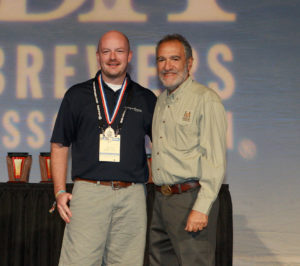 Nick Calaway, head brewer of Ahnapee Brewery (left) and Charlie Papazian, founder of the Association of Brewers and the Great American Beer Festival, at the GABF awards ceremony. Photo by Jason E. Kaplan.

But all along he was brewing as a hired hand of Aric and Brad Schmiling, owners of von Stiehl Winery. On Feb. 1, Calaway took ownership of the brewery.

“When we first started the brewery, the deal was that farther down the line, I’d be able to purchase the brewery,” Calaway said.

It was last spring when it seemed the time had come to start thinking about the transfer of ownership. There were some small but long-term decisions that needed to be made for the brewery, and Calaway started questioning – are these my decisions or should the Schmiling brothers make these decisions? He knew as owners of the business, they should make the decisions, but since the decisions would have long-term consequences for the brewery, he felt he should make them.

“So last spring we started talking about the purchase,” he said. “It’s been a long time coming, but we got through it. One chapter closed and another opens. It’s exciting.”

Like many craft brewers, Calaway began as a homebrewer, but only after he was working for a craft brewer – Titletown Brewing in his native Green Bay.

“I started out bussing tables at Titletown at age 16,” Calaway said.

Being a natural go-getter, Calaway worked his way up the ladder at Titletown, eventually becoming general manager.

“The only thing I didn’t do there is brew beer,” he said. But he was homebrewing and bringing his beers in for critique by the professionals at Titletown.

“They were very upfront with me,” Calaway said. “Some of the beers were good and some were bad, but I got good information from the guys.” 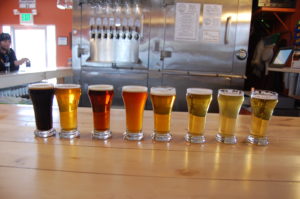 As a homebrewer, Calaway liked to push the limits with science.

“I did a lot of experimental styles and really found out what not to do,” he said, explaining that his most radical beer might have been an Oktoberfest that did not finish at the gravity he wanted and was too sweet.

“I ended up adding Beano to it,” he said.

Beano is an anti-flatulent product that contains a natural enzyme that breaks down complex carbohydrates before they turn into gas in the digestive system. Calaway reasoned that adding Beano to his Oktoberfest would break down the sugars and make it easier for the yeast to eat the sugar.

“It thinned out the beer. Sadly, it thinned it out too much and it ended up being very dry,” Calaway said. “It was drinkable, at least.”

While many brewers are inspired by brewing regions or styles, Calaway said he was most inspired by ingredients.

“I really liked particular malt varieties, like Maris Otter malt, and as a homebrewer would use those malts I liked particularly heavily, but when I started here, I made a conscious effort not to do that and use malt and water chemistry for a region.”

The result is beers that are true to style. For example, the only thing I could think of when I tasted his delicious, rich winter warmer for this year, a Scotch ale, was, “This is how a Scotch ale should taste.”

Others also recognize Calaway’s commitment to style. At the 2015 Great American Beer Festival, Calaway was awarded a silver medal for his Long Goodbye, a beautiful lager modeled after a Munich Helles. Fifty-four breweries competed in that category.

While moving up through the ranks at Titletown, Calaway was thinking of his future as a restaurateur.

But after five years as general manager, Calaway began questioning whether the restaurant business was really for him.

“It really came down to the hours,” he said. He was putting in long hours as a general manager and knew it would only be worse if he owned the restaurant.

“If I owned a restaurant, I would never sleep because I would want to be in control,” he said.

So he decided to make a detour. He met the Schmilings and decided to take a job at their von Stiehl Winery in Algoma.

“I made wine as a production assistant the first six months,” Calaway said. “After about six months, I was general manager at the winery.” 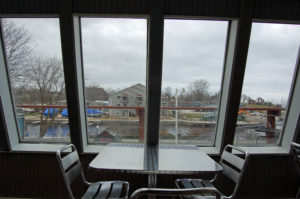 The winery is actually in a former brewery, The Ahnapee Brewery. Calaway started bringing in his homebrews to share at work, and the Schmilings realized they had a beer brewer among their employees, and the idea came for turning a two-car garage that belonged to a duplex next to the winery into a taproom for the newly established Ahnapee Brewery.

“Our plan from day one was for Nick to purchase the brewery,” said Brad Schmiling. “The business success was built around his values and abilities as a business person and head brewer. He worked hard to get to where he is now and we have no doubt that his work ethic and attention to detail will ensure his success going forward. The magic is in Nick’s precise ability to brew flavorful and true-to-style beers. We all appreciate Nick’s humble, honest integrity and it makes him a player to watch in the craft beer realm. We’re happy to have a brewery in Algoma and believe that it complements the offerings that the winery has been long known for.”

So, now, in addition to being the brewer, Calaway is the accountant, the HR department and whatever else needs doing, but he also cites his team – Scott Masarik who takes care of sales and events; Adam Przybylski, the taproom manager; and brewery assistant Josh Green.

Calaway has set himself a goal for this year of slowly increasing distribution of his bottled offerings.

“We’re hoping to get to the Fox Cities and Sheboygan County this year,” he said. “It doesn’t sound grand, but it is to my mind. We’re shooting for sustainable growth as opposed to widespread growth right away.” 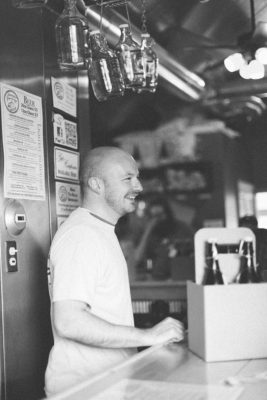 “That will be our annual release from now on,” Calaway said. “It was released kind of by design right around the purchase. We want to have a few years under our belt and do vertical tastings. It’s something we can really promote in the future as an anniversary beer.”

Calaway also celebrates the brotherhood of brewing by opening the taproom to other craft brewers in February and March. The tastings begin this Saturday, Feb. 4, with Meditator Doppelbock from Calaway’s former employer, Titletown.

“It’s great to have all of those breweries actually come out and see us and have a beer with us,” he said. “All of the brewers personally came out last year and they said they were coming this year, so it’s great to have that relationship with them. A lot of times they are a one-off. Five gallons, you get it now and never again. It’s kind of like homebrewing all over again.”

For more information on the brewery, special releases and events, visit ahnapeebrewery.com.