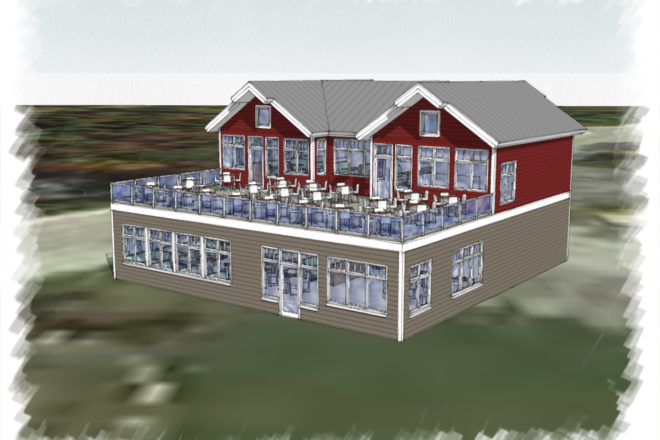 This initial design for the “high-end” restaurant proposed for the Brain property in Sister Bay was sent back for revision by the Sister Bay Plan Commission.

Two different projects went before two different Plan Commissions and were sent back for revision.

On Sept. 1, the Sister Bay Plan Commission heard from Chris Schmeltz, developer of a “high-end” 300-seat restaurant planned for one of the lots on the village’s Braun property.

Village Administrator Zeke Jackson described the plans as “a first glance” of the structure proposed for Lot 8, who added that “aesthetics are so important in this particular development.”

Schmeltz described the color and design of the 1½-story restaurant as inspired by boathouses in Bergen, Norway.

Saying that the first structure in the development will set a precedent for the rest of the development, commission member Don Howard questioned whether the design fits the commission’s request On Deck be used as an example of how the buildings should look.

“Yes, it’s Norwegian, maybe, but it doesn’t look like what we wanted,” Howard said.

Commission member Marge Grutzmacher echoed Howard’s concern. “I’m concerned about the style and color because it’s setting the tone for the entire complex,” she said.

“Right now we don’t have a pattern,” she said. “We are not all-white Ephraim.”

Schmeltz was sent back to the drawing board after being advised that the commission would like to see Door County stone incorporated into the building design and some decorative trim added to the building.

Door County Brewing Co. hopes to move to this location in downtown Baileys Harbor and open in time for the 2017 season. Bearded Heart Coffee will remain at its current location. Photo by Jim Lundstrom.

On Sept. 6, John McMahon, owner of Door County Brewing Co., went before the Baileys Harbor Plan Commission to fast-track a plan to move the brewery and taproom about three blocks south of its current location, directly off Hwy. 57 in the area now occupied by Fish Creek Moccasin Works. The property includes the Bearded Heart Coffee Shop, which McMahon said would remain in its location.

McMahon had already received the over-the-counter permission for the taproom at the new location, but needs a conditional use permit from the town for the brewery relocation.

“We would like to break ground in November so we can open in May,” he said.

McMahon said the new brewery will be 2,100 square feet, “Not much bigger than where we are, but we need higher ceilings for the brewery.”

Two residents of Guy Street, which overlooks the planned brewery property, voiced parking and safety concerns if the brewery were allowed to use School Lane for parking in the rear of the building.

“Putting a lot of traffic on School Lane, there a lot of citizens who are going to object to that,” said Max Laird, who said School Lane is really just an alley.

Laird said he was representing two constituencies at the meeting – boaters/anglers who use School Lane for parking when using the town marina, and homeowners aligned along School Lane.

“Opening a parking lot has potential to become a problem,” Laird said. “What we don’t want to have is traffic in the alley. That’s the key.”

Bruce and Jill Alexander are Laird’s neighbors, and they also expressed concerns that increased traffic on School Lane could cause a safety problem.

Commission member Cal Oldenburg suggested that McMahon work with Paul Salm, owner of Cornerstone Pub, to get an easement to use a chunk of his southernmost property to create an entryway to rear parking at the brewery from Hwy. 57.

“I’m all for finding an alternative,” McMahon said.

He agreed to meet with Salm and work out details for a proposal in order to meet with the Plan Commission and town board on Sept. 12, with the idea that the town will approve the plan and McMahon can take the next step in the process by bringing his plan to the county’s Resource Planning Committee on Sept. 15.

McMahon also told the commission that he does not yet know what he will do with the current brewery/taproom building he owns at the corner of Park Road and County F.