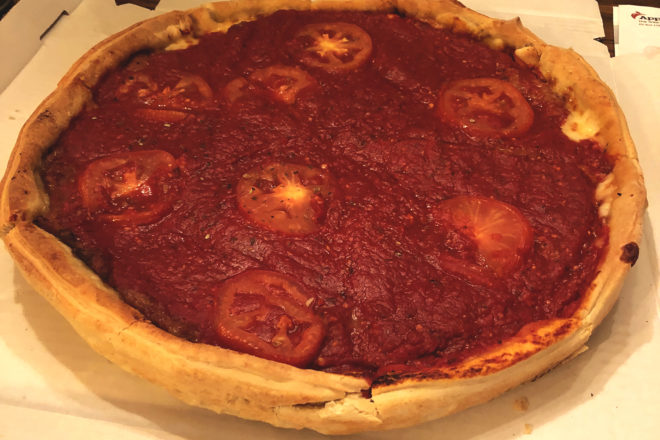 Last week a friend recommended the deep dish-style sausage pizza from Sonny’s Pizzeria, which was described as having a sausage patty the size of the crust baked into it to ensure that there is sausage in every single bite. Ever since that conversation, I’d had a growing craving for this delectable meal, so Saturday night I headed to the Sturgeon Bay pizza place, just south of the Michigan Street bridge. I grabbed a seat at the bar to place a to-go order and was immediately impressed by the cozy atmosphere: a fire in the fireplace, lots of warm wood and nautical design features, and tall windows to give a framed view of the sunset and canal.

I found the recommended pizza – named Old Chicago – in the specialty-pizza section of the menu, where it was indeed described as having a full sausage patty baked into it. I placed my takeout order, and because it’s truly a Chicago-style pizza – with high, doughy edges and a good inch of toppings – I had plenty of time to sample the latest brews from Bridge Up Brewing. Since opening in January, brewer Trent Snyder has been busy testing different styles of beer, and for now they’re sold exclusively at Sonny’s.

The brewery itself is on the lower level of the pizzeria, where you can see the operation through windows. There isn’t a taproom quite yet, but those plans are in the works, with hopes to be open by early summer. Once the taproom is complete and the height of the summer season has passed, Trent hopes to expand the one-barrel brewing system to five or seven barrels, enabling him to brew more styles, offer select beers consistently and possibly put kegs on tap outside of Sonny’s.

“Last month we were selling around 20 percent or so of our own beer. This month we were closer to 40 percent of all beer sales,” said Kenny, manager of Sonny’s Pizzeria. That number seems to be increasing, along with more local awareness of the brewery. The goal of the barrel expansion is to offer growler fills, to-go cans at the tiki bar and a full line of frequently changing brews on tap.

For now, the focus is on the smartest way to keep growing and brewing. Since the January brewery opening, Trent has brewed about 11 varieties. “The reason for that is that we are looking for what our flagship beers will be,” Trent said. “We want to brew beer that will sell and make people happy. We’ve always said, we are a brewery for the people. And when we say people, we’re talking about the people who live and work here, and also people who visit.”

Overcoming the stigma of craft beer – sometimes seen as being overly experimental – has been a focus for Trent. “There’s a lot of people in the community who are light-beer drinkers and think of craft beer as being really out there. We’ve been trying to introduce them to the craft-beer version of those styles they are already drinking.”

For Bridge Up Brewing, craft beer means small-batch, thoughtfully crafted beer, made locally for the local beer lovers. In other words, you don’t have to be a beer snob to appreciate the delicious craft brews coming from Bridge Up.

As a beer appreciator myself, I sampled the latest tapped beer – the Peanut Butter Jacksonporter – and was glad to find the peanut butter flavor wasn’t overpowering: perfect for a wintry end to March. My favorite of the evening was the Escarpment Citra Pale Pale: light in body and refreshing, it has just the right amount of hops for my taste. The Knee-High Cream Ale – one of the top sellers – was also very drinkable, with a hint of sweetness.

On Friday, April 5, the Bridge Up Brewing Company will be adding its latest tap to the lines: a U-Pick Tart Cherry Gose that is said to be light, crisp and slightly sour, with a tartness from the cherries. The brewery will be debuting the new brew for its Door CANcer fundraising event, which involves shaving the heads of 30 volunteers in support of the nonprofit, which assists cancer patients in need. A portion of all pizza and beer sales will also be donated to Door CANcer.

After thoroughly enjoying the samples of Bridge Up brews, my to-go order was ready. The Old Chicago pizza was no joke: the to-go box was so heavy that it could have held five regular pizzas. At home, we dug in to the deep-dish, which had a thick layer of mozzarella cheese, Italitan-spiced sausage and lots of chunky tomato sauce in every bite. One slice was filling, but it was too good to stop there. It was gone before we knew it, and my younger brother doubted that he’ll ever eat another non-Chicago-style pizza again.