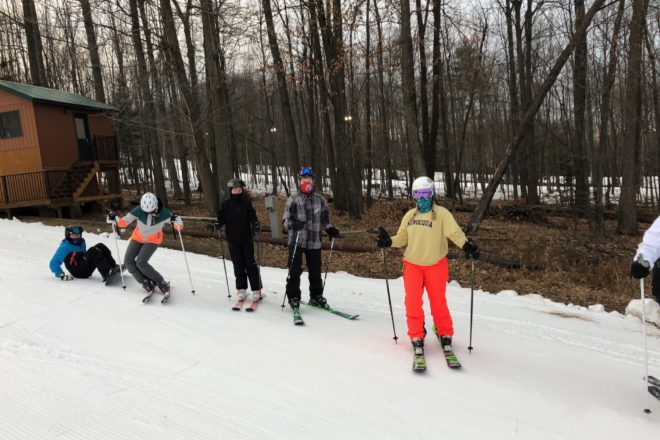 Sturgeon Bay High School (SBHS) skiers, including (from left) Tristan Brilla, Lauren Alger, Ben Stephens, Carter Henry and Tori Alger – at practice in Wausau – will be considered a club this winter when they compete in Northland Conference events. If things work out well, however, skiing may become a varsity sport for the Clippers, said club leader Brian Stephens. Sturgeon Bay may appear in conference standings if individuals and SBHS members finish in three out of five meets. The first was held Jan. 7 at Granite Peak in Wausau, followed by Jan. 13 at Big Powderhorn, Jan. 19 and 25 at Christie Mountain, and Feb. 4 at Granite Peak. Submitted.

COVID-19 protocols wiped out Carter Henry’s main sport – baseball – in the spring of 2020, and then precautions spoiled other sports throughout the fall.

Although many athletics schedules shrank or disappeared in 2020, Sturgeon Bay High School (SBHS) has greatly expanded one of its programs: downhill skiing. Henry relished the challenge of trying a new sport and conquering a downhill course along with more than a dozen schoolmates.

SBHS has had a club that went skiing for fun each year, but it will participate for the first time this year in competitive Northland Conference events in slalom, giant slalom, Super G and some snowboarding.

Henry’s ready to give it a try.

“Once I heard about this team, I thought it was a great way for a winter sport to be filled,” Henry said. “I thought, for anybody who had their season canceled, it would be a great way to get out and be active in this relatively unusual year.”

It will be his first time navigating around gates in snowboarding or skiing events.

“I have done the customary carving, just racing my brother down the hill, but nothing ‘race-like,’” Henry said. “So, this will be a fun little experiment for our team to try and to learn a little more about the sport.”

Brian Stephens, CEO at Door County Medical Center, had the idea to greatly expand the ski club. He said the students needed some safe, structured activities and that was easier to make happen outdoors. So the club was expanded into a competitive unit with at least two practices and up to five meets this winter.

“Safety’s a big part of it,” Stephens said. “My daughter ran cross-country, and our cross-country season was mostly an intrasquad season. The coach of the cross-country team works at the hospital as well, so I got to see all of the protocols that she put in place and things she did.”

Sturgeon Bay Athletic Director Todd Meikle said Stephens’ wife, Amy, serves on the school board, and Meikle and the Stephenses saw a need for the kids to “get outside, even during the wintertime,” for safety’s sake.

“What better timing than to pick up and start the ski team?” Meikle said.

Stephens and his son, Ben, a freshman, ski often, whether out of state or at Granite Peak near Wausau.

“We’d see the high school kids out there, and we thought, wouldn’t it be fun if we had a team?” Brian Stephens said.

In addition to the skiing events at Granite Peak, Christie Mountain and Big Powderhorn, the Sturgeon Bay students may be able to enter snowboarding events including slalom, giant slalom and snowboard cross (aka boardercross).

“It’s not tricks,” Stephens said. “It’s racing against the clock, but a lot of it’s technical – how good are you at your turns, rather than it is how fast are you?”

Stephens said students will ride lifts with each other and wear masks at all times.

“Skiing’s one of the things where you’d probably be wearing a face mask anyway,” he said.

Granite Peak ski director Ron Lawrence, who lives in Baileys Harbor most of the year, has been a “great resource,” Stephens said. Lawrence has assured him the ski hill is doing everything it can for skiing and skier safety.

“They’re keeping people out of the lodge except to just go in and use the restroom or to grab food,” Stephens said. “They’re asking people to eat outside.”

Joseph Ullman, an SBHS senior, plays soccer in fall and shoots for the Clipper Clays in the spring. This winter, he’s added skiing competition.

“I think this is a fun opportunity to get out and do something else,” Ullman said.

Carter Henry said he’s glad to have a sport this winter, even though his fall and spring without a high school sport “weren’t terrible” for him.

“I was lucky enough that I had a lot of friends who like doing outdoor activities to just kind of fill the time in the ways that 2020 would allow us to experience a little bit of fun,” Henry said. “I think it’s important to have something here to kind of adapt with the times.”