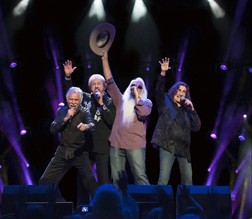 “Hello. Sally? This is Richard Sterban of the Oak Ridge Boys.”

“Oh my goodness. Your voice is so low!” I can’t help but react to the bass singer’s deep, booming voice, made famous for its “oom-pa-pa-oom-pa-pa-mau-mau” solo in The Oak Ridge Boys’ 1981 single “Elvira.”

“If it wasn’t for this voice, I’d have to get a real job,” laughs Sterban, who joined The Oak Ridge Boys quartet in 1972. The band was founded in the ‘40s and underwent a member change in the ‘70s – when Sterban received a phone call from fellow Oak Ridge Boy William Lee Golden.

“It was a matter of being in the right place at the right time,” says Sterban, who was touring and singing with Elvis Presley when he received the call. “I’m singing with the King of Rock and Roll, but a big fan of The Oak Ridge Boys, I knew there was great potential,” recalls Sterban. “I had to make a major decision leaving Elvis, I think I made the right one.”

In those 41 years, The Oak Ridge Boys have remained relevant and successful. Sterban credits that to the groups’ love of the creative process. “We periodically go into the studio and reinvent ourselves, create new music while staying true to ourselves,” he explains. Case in point – the band covered “Seven Nation Army” by The White Stripes, a rock duo, just a few years ago.

The band’s most recent album, Boys Night Out, marks their first live album. “It was something we wanted to do for a long time,” says Sterban. “The fans have been asking for it.” To create the record, the band performed 11 shows at the Riverside Casino and Resort in Laughlin, Nevada, in seven days.

“We recorded all these songs, as many as we could in seven days,” says Sterban. “Then we listened and picked out songs we liked the best, that belonged on the CD. The fans love it.”

Of course the album features the band’s signature hit, “Elvira,” which they promise to perform during their show at the Door Community Auditorium in Fish Creek on July 14.

“We will feature songs off the new project – the greatest hits, the familiar songs,” says Sterban, “but at the same time – we love the creative process – [we will perform] a few new songs. We have a gospel music background and we’re patriotic guys who like to sing songs that honor our country. It’s family entertainment.”

For more information about The Oak Ridge Boys visit oakridgeboys.com.

The Oak Ridge Boys will perform July 14 at 8 pm at Door Community Auditorium. Ticket prices range from $48 to $75. For more information or to purchase tickets, stop by the box office located at 3926 Highway 42 in Fish Creek, call 920.868.2728 or visit dcauditorium.org.