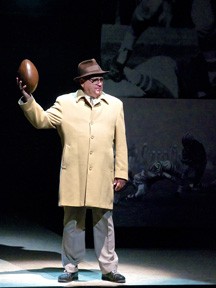 Vince Lombardi has returned to northeast Wisconsin in Eric Simonson’s Broadway play Lombardi, now on stage at Peninsula Players Theatre. Based on the best bestselling biography When Pride Still Mattered: A Life of Vince Lombardi by Pulitzer Prize-winning author David Maraniss, the play centers on a time when Look Magazine reporter Michael McCormick visited Green Bay in the mid-1960s to write an article on Lombardi.

Simonson, a Wisconsin native and the playwright of Lombardi, shares his insight in bringing the legendary coach to life on stage.

Eric Simonson (ES): Absolutely! I’ve been a Packers fan since I can remember. I missed most of the Lombardi years and then suffered through the wasteland of the ‘70s and ‘80s.

SS: What inspired you to base a play on David Maraniss’s biography on Vince Lombardi, When Pride Still Mattered?

ES: I’d written a play about Frank Lloyd Wright with Jeff Hatcher. It did pretty well and got a few productions across the country. After I finished that project, I started looking for another Wisconsin icon to write about, and Lombardi was the logical choice. About that time, David Maraniss came out with his book When Pride Still Mattered, and that sort of sealed the deal. David wrote what was to become the quintessential biography of Lombardi.

SS: What surprised you most about the legendary coach?

ES: That he was such a tortured soul. His determination to win left him with an empty place in his life that could never be filled.

SS: Neil Friedman as Lombardi – aside form the uncanny resemblance, what does he bring to the character? 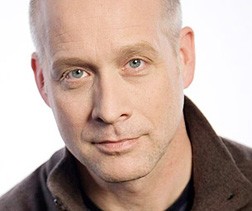 ES: He brings an understanding to the role in many respects. Neil has Lombardi’s vocal patterns down solid, which is important, because much of what made Lombardi a great motivator was in how he said what he said. Neil also understands the pathos as well as the humor of the play. That’s very important in getting at the character.

SS: The play opened in New York City (to critical acclaim), how does the reception of the play differ with Wisconsin audiences?

SS: Your list of accomplishments is lengthy – from co-directing Hamlet, writing a number of plays and adaptions, and receiving the Princess Grace Statue Award – what’s next?

ES: I’m concentrating on writing for television now. Though I have a couple play commissions I’m working on, and an opera I’m directing next January in Philadelphia.

SS: Finally, what’s your take on the controversial call that concluded the Packers’ game against the Seattle Seahawks – touchdown or interception?

ES: We was robbed! But really, if that doesn’t make supreme villains out of the NFL owners, I don’t know what will. What are they thinking?!

Lombardi is performed Tuesdays through Sundays at 7 pm, except for a 4 pm matinee on Oct. 14 (the final performance). There are no performances on Mondays.

Tickets range from $33 to $39; discount tickets are available for groups of 15 or more.

For more information or to reserve tickets, call 920.868.3287 or visit http://www.peninsulaplayers.com.