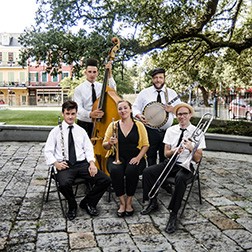 On March 6, Door County Brewing Company will play host to the Shotgun Jazz Band, a five-piece traditional New Orleans jazz band that finds its inspiration in some of the most well known “Revivalist” players of the 20th Century.

Born in the French Market of New Orleans as a duo comprised of Marla and John Dixon (on trumpet and vocals, and banjo, respectively), it didn’t take long for Shotgun Jazz Band to find its footing. The street gigs between Marla and John just a few years ago led to the hiring of a clarinet player, then a saxophonist, and then a bass player. Almost as quickly as that, they were off the streets and on the stage of some of New Orleans’ biggest celebrations of its music and culture.

Though none of its members are New Orleans natives, the band infuses that “down South” heart and soul into its hot solos, exciting ensemble play, driving rhythms, and what Marla dubs “the bluesiest of bluesy vocals.” The band has some original tunes, but mostly builds its repertoire on traditional numbers and themes of love, heartbreak, people and places “to the more illicit and murderous of themes,” Marla says. “Those are the ones that folks tend to like most.”

I had a chance to throw some questions Marla’s way during what sounds to have been a crazy week for Shotgun Jazz Band (Mardi Gras, anyone?). Here is some insight on the tunes and talents behind the band.

Alyssa Skiba (AS): From what I’ve read, none of you are originally from New Orleans – how was it that you have managed to truly create New Orleans jazz, and how exactly would you describe that sound?

Marla Dixon (MD): Nobody on our latest album was born in New Orleans, no. The gentleman who engineered and produced our album is local but I’m not sure if any of it matters. There are a lot of different styles and types of players that come out of New Orleans, and the sound and genre that really moves us, as a collective, is just one of them. What the Shotgun Jazz Band is, is a sum of all it’s parts – but we’re really inspired by some ‘revivalist’ players: New Orleans Traditional, or Dixieland, players that came up in the scene in the early 20th century, but weren’t really recorded or heralded until the middle of the century. Kid Thomas Valentine, George Lewis, George Guesnon, Captain John Handy, Sammy Penn, Kid Sheik … some of those guys were really rough as players, but they put together these really moving, fun bands with driving rhythms. Now, I’ve heard folks copy their licks, and that’s cool I guess, but it’s not what we’re about. Our band is a sum of all our parts, and we’re (obviously) not them. I just love the energy those old guys put into it, and the ensemble playing: the way they were all playing together as a band, as opposed to a rhythm section that played while all the soloists took their turns.

AS: How do you characterize the Shotgun Jazz Band’s sound?

MD: Some of the highest praise that I’ve ever received has been “I never thought I’d like jazz, but boy do I like your band.” We’re pretty accessible and easy to enjoy. Now, don’t get me wrong, some of the guys in this band are truly the best in the world – I wholeheartedly believe that. But the band is without pretension. We play hot jazz, blues, we even take some old country and pop tunes and work our magic on them. It’s hot and real, for everyone in the room, not just the band.

AS: What is your current lineup?

AS: Have you played in Wisconsin or Door County before?

MD: This is our second year playing at Phil Pospychala’s Tribute to BIX Fest in Racine! What a hoot. Only a group of jazz fans who are that dedicated to their music could get us to travel to Wisconsin from Louisiana in March. Phil curates a really great line-up of music. This year, it’s Shotgun Jazz Band and Tuba Skinny out of New Orleans, and Steve Torrico’s Lakeshore Syncopators out of Chicago. It’s a blast – everyone should go! We’ve never been up to Door County, but John McMahon has a real persuasive talent, and we’re excited to meet everyone.

AS: What inspires your music?

MD: You just need to hear it. We don’t play gigs that are dull or that we find boring. Every time we play, there is something interesting, or fun, or moving. The music itself lends the opportunity for a good time, but the band is built for it. We all just love to play with each other and for the crowd. Personally, I’m a bit of a storyteller. So, while the songs aren’t generally great long sagas or anything, many of them have been written about big, passionate things, and I try to convey that. It makes it so much more interesting to tell the story, rather than just sing the song.

MD: When we met the guys from Door County Brewing Co. at one of our gigs in New Orleans, we were taken aback by their warmth, friendliness and gregarious love of a good time. A lot of people make promises to invite us to play, and usually not much comes of it. With these guys, it was no surprise when, not long after they got home, we started putting a plan together. The Door County gents are a great time, and we’re gonna head up there and bring some of our good times with us. Let’s have a party!

Catch the Shotgun Jazz Band live at the brewery from 6 – 9pm on Friday, March 6. Admission is free. The brewery is located at 2434 County Road F in Baileys Harbor. To learn more about the band, visit ShotgunJazzBand.com.