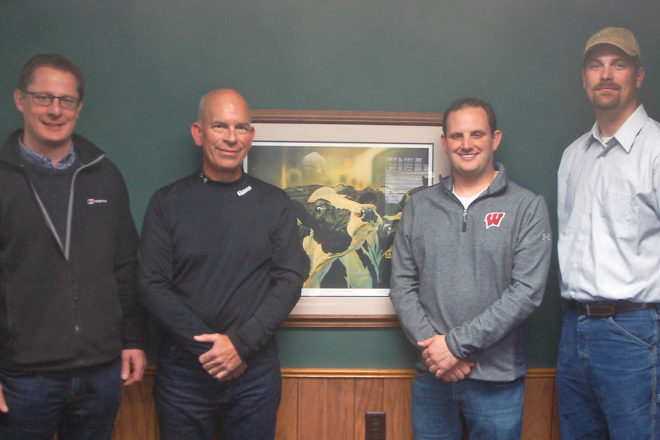 British agronomist Tim Stephens traveled to Kewaunee County on Oct. 27 as part of a fact-finding mission he is on to help farmers in southwest England deal with environmental issues.

Specifically, Stephens met with members of the Peninsula Pride Farms, the farmer-led initiative to use science to make farming more environmentally friendly.

Stephens is employed by Wessex Water, a regional water and sewerage business that serves 2.8 million customers.

He explained that until the nation’s water works were privatized in the 1980s under Margaret Thatcher, the industry suffered from decades of underinvestment.

“We had the dirtiest beaches in Europe,” he said. “We were still dumping sewage sludge in the sea, not just our company but the whole industry. Britain was known as the dirty man of Europe.”

Faced with a growing list of polluted water sources – wells, springs and reservoirs – the company was looking at either installing nitrate removal or pesticide treatment plants at a possible cost of hundreds of millions of dollars, or, since they knew the primary source of contaminants was from agriculture, trying to deal with the pollution at its source.

“We decided there must be a different way of doing it,” Stephens said. “Rather than deal with the problem at the end of the pipe, we decided to try and work with farmers to stop those problems happening in the first place.”

That’s why a water/sewer company has an agronomist on its staff.

Last year Stephens applied for and won a study grant from the Nuffield Farming Scholarships Trust, which is what brought him to Wisconsin last week to see what the dairy industry is doing here to promote environmental concerns. He has also traveled to one of the most productive agricultural areas in the world, Brazil. He studied no-till efforts in France and met with farmers and regulators in California, Iowa and Delaware. Stephens also plans to visit Australia, New Zealand, Denmark and Holland.

Stephens said from the start he knew he wanted to include Wisconsin among his stops.

“A number of the largest-scale dairies I am working with in our watersheds have visited Wisconsin and are modeling their businesses on what they see here today,” he said. “Having seen Don’s unit and Lee Kinnard’s, I can see why those farmers I work with are coming here, because Wisconsin is where it’s at in the dairy industry. You’ve got world-leading scientists, a very progressive industry, whether that’s in terms of cow environment, building design, nutrition, health. I was very impressed by the lactation Lee Kinnard’s cows are achieving. I would say that’s way above the UK industry average. You’re ticking all the boxes on cow health.”

Stephens said he was particularly interested in farmer-led initiatives, such as Peninsula Pride Farms.

“I was doing some internet research and came across the Peninsula Pride Farms website, dropped Don an email and he was very generous in replying to me and inviting me here,” Stephens said. “I’ve had a great week already in Wisconsin, visiting some fantastic dairy farms. The standard of management I would say is superb, both at a senior level and how that works its way down to the people on the ground, the milkers and the herdsmen and women.”

For his part, Don Niles said he was “stunned” to learn UK farmers are struggling with the same issues as farmers in the Midwest of the U.S.

“I would have thought that everything here was kind of unique. This allows us to see how un-unique these problems really are,” Niles said, adding that area collaboration has been great, but “now our world has expanded to collaboration with Tim and what he’s doing and seeing. He’s been very forthcoming, not only what they are doing in England but in other places he’s visited as well, so this is really cool.”

“This idea can get picked up anywhere and that’s exactly what we wanted to happen,” said Tony Brey a Southern Door farmer who is also a Peninsula Pride member.

“I’m struck by the approach Yahara Pride [a Madison-area farmer group] and Peninsula Pride have taken, that farmers have taken ownership of the initiative,” Stephens said. “I think that as the water quality issue in the UK rises up the agenda – and we’ve got our share of lawsuits and bad feelings – I should think this is a model I’m going to take back to our farming groups and individuals and say that this is how they’re doing it in Wisconsin. It’s proactive, it’s trying to make sure the farmers are involved in getting the science right as well. And farmers are steering people like me, so instead of me coming up with the ideas and selling them to farmers, farmers here are coming up with the ideas and people like me are becoming facilitators.”

“It was a year-and-half ago this group officially acknowledged or owned our role in the environmental situation,” Niles said of Peninsula Pride Farms. “That was kind of intimidating at the time, but it’s kind of empowering, because now we have to come up with better ideas. That energizes you to do it yourself and not hunker down with the bunker mentality, waiting for someone to come up with solutions you’re not going to like. To find somebody like Tim who’s looking for that spark, and we’re looking for the knowledge to share…Well, we’re all looking forward to a trip to England.”

“And I’m looking forward to hosting,” Stephens said. “I genuinely mean that.”