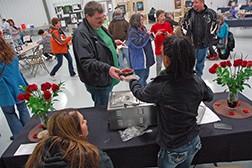 The Exhibition Hall at Kewaunee County Fairgrounds was filled with student art and the aroma of more than 20 kinds of soup on Sunday, March 1, as the Kewaunee County Zoological Society (KCZS) held its 2nd annual Zoupart event to help rebuild Bruemmer Park Zoo.

KCVS Vice President Pam Zander got the idea for an art and soup fundraiser from the Mid-Winter Art Exhibit and Bottomless Soup Bowl Feed in New London.

“We’ve been going there several years,” she said. “We tried it last year and it was a huge success.”

The concept is a simple one: Enlist student artists from 10 area public and parochial schools to create and decorate pottery bowls. Schools without the means to fire pottery were presented with pre-made bowls and mugs to be decorated. Another part of the equation is to get area businesses to make soup to fill the bowls. And the final part is to get people to come to the event, buy a bowl for $10 and then sample the various soups.

“We sold almost 500 bowls this year, almost double what we did last year,” Zander said.

Twenty-one businesses made soup for the event, everything from avocado leaf lasagna soup to shrimp bisque. Attendees voted for their favorites soups. The winning entry by one vote was Cheesy Bratwurst Soup from Janda’s Bar and Grill. Runner-up was The Waterfront with Corn Chowder.

There were also raffles, a pottery throwing demonstration by Mason Lukes and art on display from K-12 students.

“People want to support the zoo,” Zander said. “Support from businesses and individuals has been tremendous.”

Or, she added, people who know about the county-owned zoo want to support.

“There are people who don’t know the zoo is there,” she said.

The zoo was established in a former quarry in 1934.

Current residents of the zoo include Arctic foxes named Buddy and Jewel, bobcats named Bella and Baxter, raccoons, a red golden pheasant, a sheep, a goat, white-tailed deer, ducks, a goose and 17 peacocks.

“There were monkeys when I was a kid,” Zander said, adding that although the society is thinking of adding more animals to the zoo, monkeys will probably not be part of that addition. Animals used to winter are more suitable.

Up until 2010, Pa Bear was a main attraction. When he died that year, the county was considering closing the zoo. That’s when the zoological society was formed. Today there are about 40 members who work to support and improve the little zoo. 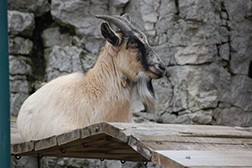 “The bear pen is coming, but that will be major,” Zander said.

The society also plans to add ramps to make the zoo wheelchair accessible.

The zoo is located at the 70-acre Bruemmer Park, just outside of Kewaunee and across from the county Highway Department, where the members of the zoological society meet the fourth Tuesday of the month at 7 pm.

The society’s next big fundraising event is called Zoobilee and is scheduled for Aug. 29. It is held at the zoo.

For more information on Bruemmer Park Zoo and the Zoological Society of Kewaunee County, visit bruemmerparkzoo.com.