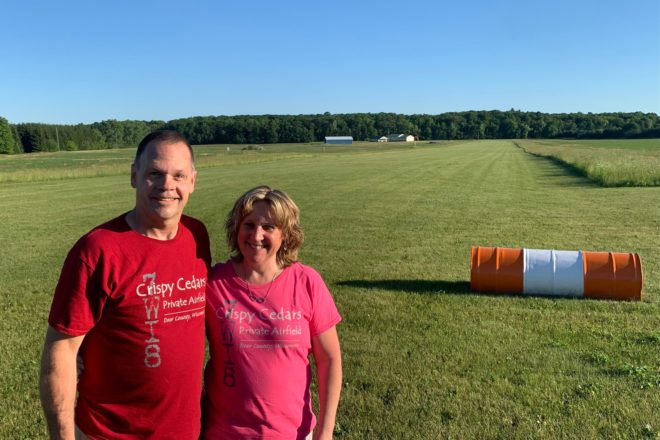 Known in aviation lingo as 7WI8, the Crispy Cedars private airfield in Brussels offers pilots of small airplanes – many of whom attended last month’s EAA Airventure in Oshkosh – a place to fly in and go camping in Door County.

“We don’t charge for camping,” said Kevin Slezewski, who owns the property off 4 Corners Road where the 2,000-foot grassy landing strip is located.

He said the airfield is a place where small-airplane pilots who know about the airstrip may stop over for a night and sleep in a tent.

Slezewski is a quality-assurance manager at Midwest Wire and an airplane pilot himself. His wife, Tracy, a librarian with the Southern Door County School District, flies with him.

He said the airfield he built in 2003 can accommodate small, single-engine aircraft such as Cessna or Piper airplanes, or the home-built variety, many of which were on hand last month for the Airventure.

“Some stop [at Crispy Cedars] on the way to Oshkosh,” he said.

Slezewski said those pilots are part of the aviation community and are aware of where the private airports are located. He also said the Wisconsin Department of Transportation’s Bureau of Aeronautics has guidelines for setting up an airport so that pilots will be able to fly in and out safely. To use his airstrip, Slezewski said pilots need to contact him in advance to get permission to land there.

He said the airpark has lots available for purchase by pilots. Two of the three who currently own property fly in on a regular basis, and the other has a campsite with an RV on-site.

Along with the natural setting not having camping facilities, Slezewski said the airstrip differs from a public airport – such as the Cherryland Airport about nine miles away – and the requirements that go with an airport by not offering services such as fuel or maintenance.

“We just choose to keep it private,” he said.

Slezewski said that having his own airstrip has been a passion since he was a child, when an uncle had a runway in his backyard. He also said he hopes that the site he purchased in 1996 and had always intended to make into an airstrip will continue that way into the future after expressing his wishes to his three sons.

“I hope [the airstrip will be] here after I’m gone,” he said.

Find out more about the Crispy Cedars private airfield at crispycedars.com, by email to [email protected] or by phone at 920.495.7539.