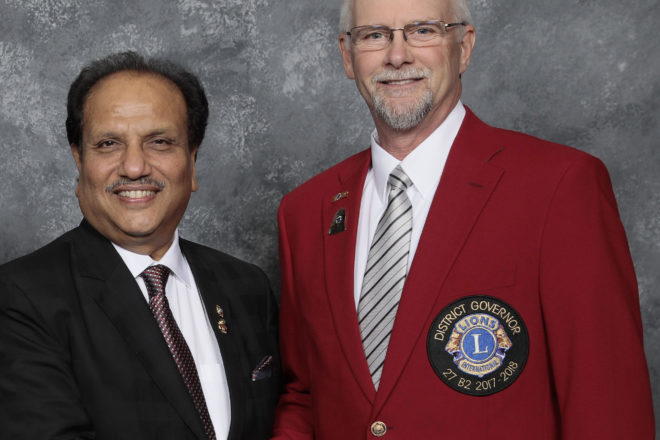 Jim Noll doesn’t mind telling you that he and his wife, Cindy, joined the Brussels Lion Club when they moved to the area in 1993 as a vehicle to meet people.

“We thought Lions was a good way to do it,” he said.

But it wasn’t long before they realized the Lions are more than a social club.

“I saw what Lions do in their communities and beyond,” Noll said, which convinced him that he didn’t just want to be a club member. He wanted to help lead the Lions into the 21st century.

On July 4, at the 100th International Convention of Lions Club International in Chicago, Noll was installed as the District Governor for District 27B2, which means for the next year he will represent the 2,300 Lions in 70 Lions clubs in Northeastern Wisconsin.

There are 10 districts in Wisconsin. Noll’s district is the largest by land area, number of clubs and number of members.

Noll makes certain to mention that by members he means both men and women.

“A lot of people think that Lions is a men’s club, and it was, but since 1987 we have accepted women as members, and they are a great addition,” he said.

Noll said he will focus his efforts as district governor in getting clubs to be more visible in their communities and attract new membership. He points out that even though the Lions Club is the world’s largest service club organization in the world, with about 1.45 million members and 48,000 clubs in 210 countries, like so many other organizations, its survival depends on bringing new blood into the fold.

“That is a universal problem with just about any organization, getting younger members to join,” he said. “Unfortunately, many people look at Lions as an old person’s club. We are lucky enough in Brussels, we have brought in nine members and all of them are younger than 35. That is the future of Lionism.”

Noll mentions that although one of his goals is to increase membership, it is less about numbers and more about the cumulative effect of more Lions in the world. He said a recent survey conducted by Lions International found that a single Lions Club member has an impact on 70 people every year.

“So if I can take a club like, let’s say Egg Harbor, which has 24 members, if every one of them could bring in one member, 24 times 70, that’s 1,680 more people who are impacted. It multiplies unbelievably quickly. We have 267 Lions just in Door County. Everybody knows somebody who could be a Lion. The more members we have, the more impact we can have in the community and worldwide.”

Lions have always been rather humble about their accomplishments, but if you pay attention you will notice their influence via the Lions emblem on community projects throughout Wisconsin. Noll said that could be anything from garbage cans for a town park, to a village playground or baseball diamond, to a library addition. Legacy projects, he calls them.

“That’s the nice thing about Lions, we can do local community work, but beyond that, when you get to the state level, there are certain things Lions support, one of those being the Lions Camp in Rosholt, Wis. In the summer we have weeklong sessions for kids who are blind or sight-impaired, another week for kids who are deaf or hearing-impaired, another week for kids with cognitive disabilities, and we have a couple of weeks for kids who have diabetes, where we partner with the Wisconsin Diabetes Association. We also have a couple weeks for adults who are blind and cognitively disabled. It’s free to those who come to camp. It started because a blind kid made a comment to a Lion many years ago that that blind kids can’t go to summer camp. We now have a 440-acre camp with a 40-acre lake that is the only privately owned lake in the state of Wisconsin. It’s just a fantastic opportunity for those kids to experience camp, and more importantly than that, with kids who have the same disabilities.”

Noll is justly proud of the Lions Club’s history of championing vision issues.

“That originally came from a challenge in 1925 from Helen Keller, when she asked Lions to be her knights of the blind,” Noll said. “The International took that challenge and it’s been something we’ve supported ever since.”

He mentions the Lions eye bank in Wisconsin.

“They harvest donated tissue and get the corneas out to people who need cornea transplants,” he said. “We have, I guess you could call it a Pony Express for tissue that’s donated. If someone up in Superior wants to donate their eye tissue, we have a shuttle system where a Lion there will take it 100, 200 miles down the road to another Lion and its just continues and in a couple of hours we have it down in Madison.”

There are also the ongoing eyeglass collections.

“Just this year we had an eyeglass collection drive between October and May, we collected 290,000 pairs of eyeglasses,” Noll said. “They get cleaned up and if they’re usable glasses, we read the prescription and they are stored. If a group is going on a mission somewhere, they’ll go down to foreign countries that might be in need. They’ve gone to Haiti, Nicaragua. They bring along doctors to screen the people for prescriptions and give them a free pair of glasses.”

Noll is also proud that Door County Lions Clubs have teamed up with the Door County Health Department to provide free eye screening for school children. With a grant from Lions Club International, the northeastern district bought 11 eye screening devices at $7,000 per unit.

“It looks like an old Instamatic camera,” Noll said. “If we can get the child looking at us for just a split second, it registers five or six possible problems the children might have, and then we let the parent know, you should bring you child to an eye care professional. We make it very clear we are not diagnosing. We recommend everybody go and have annual eye exams. But it is amazing the number of children we caught with very serious eye problems. The kid didn’t know it. That’s how they were used to seeing.”

Noll said the Lions volunteer to do the screening. “We do about 2,400 kids a year,” he said. “In the spring we’ll go around to daycares. I’ve screened children as young as six months old. Obviously you wouldn’t be able to do that with a chart. But with this device, if I can get them looking at me for just that split second, it will register. It’s really amazing technology and it’s something we’re very proud of. Not all the counties in my district have that level of joint effort with the health department as we do here in Door County.”

Noll said if anyone is interested in learning more about becoming a Lion, “just ask around who might be a Lions member.” Or he suggests you visit lionsclubs.org. “There is a club locator on there.”