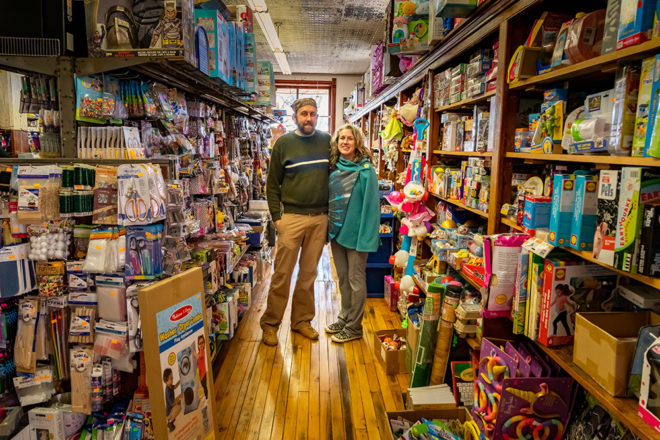 Owners Nick Waack and Heather Truett have brought the Pioneer Pantry back to life. Photo by Brett Kosmider.

When Heather Truett and Nick Waack fell in love with the old building in Brussels in 2014, they knew it was the place where they wanted to create their dream for the future. What they didn’t know then — but would soon hear from longtime community residents — was not only how happy those locals were to see a new business arriving in town, but also how that business would carry on a history that began more than 100 years ago.

Brussels, which is part of the largest Belgian settlement outside of Belgium, was founded in 1858. Many of the current residents are descendants of the original settlers, and they’re proud of their heritage. So, before we tell the story of Truett and Waack, a look at the backstory of the old building that lured them to Brussels is appropriate.

In 1906, when Gabe Pierre’s daughter, Mae, was two years old, Pierre established a general store on School Road in Brussels. By the time a local newspaper carried a story celebrating the 50th anniversary of Pierre’s store — “Brussels’ oldest business establishment” — Mae reported that she’d been clerking there since she was eight years old.

By 1956, Mae and Clarence Henquinet, whom she’d married in 1926, had been in charge of the store for decades, but she hadn’t forgotten the early days, “when people were very leery about the first canned goods that came out, overalls cost 98 cents, everyone purchased coffee beans in 100-pound sacks and ground their own coffee, and people washed their clothes with bar soap because that’s all there was.”

Clarence remembered buying 400 100-pound bags of flour to keep customers supplied through the winter. He also recalled that before Highway 57 was built in the late 1920s, the weekly trip to Green Bay took two days, whether by team and wagon, or horse and sleigh.

Both Mae and Clarence died in 1970, and as far as Brussels longtimers can recall, that was just about the end of the store at the “Five Corners” — the nickname for the area that encompasses the intersection of County C, County DK, School Road and Junction Road. A hardware store that John Long owned briefly ended in bankruptcy.

In the mid-1980s, a man from Chicago purchased the building. Before he died in the early 2000s, the second-floor apartment was rented to a series of people, but the downstairs remained vacant.

After the last apartment tenants left, the windows were boarded up, the garage door and roof collapsed, and ivy grew so prolifically that it almost hid the building — including the colorful advertisements painted on the west brick wall generations before.

Although the sign still proclaimed the building as the Brussels Store, the town had been without a retail establishment for nearly half a century when Truett and Waack stumbled upon it in the fall of 2014. They’d recently purchased a cabin in Gardner and were commuting on weekends from their homes and full-time jobs in Green Bay and Kiel.

Their goal was to run a business that allowed them to live in Door County year-round and, they hoped, use Waack’s many years’ experience in retail management.

That statement is typical of their desire to be a part of the community and their love for rural life. The small acreage surrounding their cabin, for example, is now home to 12 French angora rabbits, six alpacas, four ducks, four cats, a dog, a parrot and “about a million chickens.”

“We wanted the kind of store we’d shop in,” Truett said, “with prices equal to or lower than in big-box stores. A place where local residents could shop for everyday things without paying what tourists do in other places.”

They purchased the building in March 2017 and set about restoring it to a state that’s close to the original. Before that, though, there were decisions about what kind of merchandise they’d put on the shelves.

“Buying for the store is one of the fun parts of the business,” Truett said. “A shopping spree!”

“At one point,” Waack said, “we thought about doing only groceries, but locals who dropped in to see what was going on said they really needed a place to buy the kind of hardware items you always seem to run out of in the midst of a project. And then we thought of all the other things it would be good to have a source for without a trip of 20 or 30 miles.”

The Pioneer Pantry opened Dec. 6, 2019. Waack leans on his contacts from his previous retail job to obtain product discounts.

“We get liquidations from stores going out of business, closeouts and manufacturers’ overruns,” he said. “The prices are substantially less, and I don’t have to order huge amounts.”

Because merchandise arrives in fairly small lots, there is frequent turnover on the shelves — a good reason for shoppers to stop by often.

Pioneer Pantry is the sort of place where you can find lots of things you need — and lots of other things you didn’t realize you needed. Most of the brand names are familiar, but the prices will likely be a surprise: $3.50 for a large, super-fluffy bath towel; 25 cents for a candy bar; and $3.50 for a diary marked $14.99 by the manufacturer.

There was a steady stream of customers on the day when Truett and Waack were interviewed. Most of them bought enough to fill boxes, including a couple from Sturgeon Bay who stopped to shop on their way to Green Bay.