One of the mental exercises I thoroughly enjoy when writing some of my weekly stories is attempting to pinpoint my very first experiences with the subject at hand. I can quite clearly recall my very first sighting of a Great Horned Owl, unfortunately a dead one, at my dad’s Uncle Frank Lukes’ farm when I was about 10 years old, perhaps around 1939.

We enjoyed going to Uncle Frank’s farm because not only was he into dairy farming but he also raised domestic turkeys. On one occasion he had caught one of the large owls in a leg-trap mounted on a 10- or 12-foot pole. The owl had been preying upon and killing some of his turkeys, and the gorgeous but dead Great Horned Owl displayed such beautiful feather patterns and colors that I never forgot.

The very first live Great Horned (GH) Owl that I encountered was on a weekend in early March of 1946. My best high school friend, Tony Kotyza, and I, armed with our .22 rifles, had been hiking our favorite long wooded loop trail of several miles along the Kewaunee River when we came upon a huge murder of at least several dozen American Crows mobbing a nesting GH Owl. Seeing that large fierce raptor hunkered as low into her nest as possible, her “horns” somewhat laid back, also left a lasting impression. By the way, crows are the number one mortal enemy of the GH Owls. 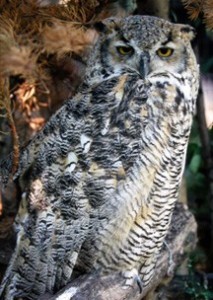 This Great Horned Owl, unalterably savage all its life, appears to be placid…but beware!

One of my favorite and exceptionally appropriate finds occurred in the wonderful Southern Door School woods years ago when I was teaching environmental education there. A 12- to 15-foot broken-off stub of an American Beech tree provided the perfect place for a pair of GH Owls to establish their nest. The woods and the adjacent fields provided perfect breeding sites for Field Mice, Meadow Voles and other rodents, which in turn became the primary food source for the owls.

What a wonderful junior high school laboratory this was, with many of the students getting fairly close looks at the nesting owls, then collecting several dozen of the coughed-up owl pellets from the ground below the nest. These in turn were carefully dissected (after being soaked in water overnight) in the classroom. Each owl pellet contains undigested broken bone fragments, animal hair and bird feathers. Surprisingly many of the bone fragments, especially jaw bones, were accurately identified. As it turned out, that owl developed a fondness for chicken (as indicated by the bone fragments in the pellets), undoubtedly preyed upon at nearby farms.

Many times in past Februarys, living in our present home in the woods, I’ve been serenaded during pre-dawn hours by one of my favorite and most fearsome of birds, a species that is thought to nest in more counties in the continental U.S. than any other bird. It was Bubo (BOO-bo), the Great Horned Owl searching for a mate, or perhaps strengthening the pair bond between him and his mate already incubating eggs by late February or into early March at our latitude.

The great Wisconsin ornithologist of past years, Fran Hamerstrom, claimed that very few townships in Wisconsin didn’t have at least one pair of these ferocious “tigers of the air” and that, unless you live deep in the city, there is probably at least one GH Owl within two miles of your home. These raptors are so widely distributed yet are seldom seen or heard by the great majority of people. Just imagine that the 1987 Christmas Bird Count in the city of Madison, Wis., turned up 45 GH Owls!

On one occasion, while listening to the pre-dawn concert of the GH Owl I would hear, every eight to 10 seconds, continuously for about 10 minutes, the low, rich, mellow “who WHOOO-who who who” lacing the still night air and carrying perhaps for two or three miles into the Hibbard Creek valley to the east. I strongly suspected that this owl was a male and that he was perched in a tree within 50 yards of the bedroom window. 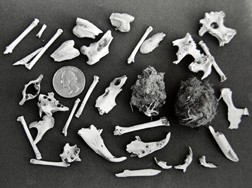 Much to my joy in past years I was treated a number of times to a GH Owl duet as I stood outdoors admiring the late night brilliant January or February stars. I clearly remember one song coming from the east of the male, and it was a perfect musical third lower than the female song that immediately answered from farther away and toward the southwest.

My good friend Carl Scholz called me one spring during the last week of March to tell me the good news. He had discovered a nesting GH Owl in The Farm hardwoods. The next morning, camera and tripod in hand, we tramped through the snow to have a look. How impressive she was, glaring at us with imposing regality, perched at least 40 feet up in her lofty throne in the large American Beech tree. I can easily understand why more than one overly cautious onlooker has been forced to “wilt” under the fierce, penetrating, wide-eyed stare of a nesting GH Owl.

The two owl chicks in the old crow’s nest at Carl’s woods were developing their typical dark face pattern when we visited the nest. That meant that their primary feathers were bursting their sheaths and that the owlets were about half-grown, approximately three weeks old. We could estimate that they had hatched around April 1. Incubation requires 30 days on the average. Now you can see why they claim title to being the grand champion of early nesters. We estimate that this individual had laid her first egg during the last week of February. 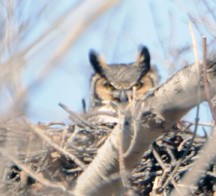 Here is the typical glaring or “I dare you!” pose of a female Great Horned Owl incubating her eggs.

It is believed that the male and female are paired for life in spite of the fact that they remain quite aloof from each other. Their favorite nest site may be an old Red-tailed Hawk’s nest seldom less than 40 feet from the ground. The dull white roundish eggs, usually two, are slightly longer than two inches. Incubation is performed entirely by the female. The male religiously continues to supply her and the young with food.

These dominant members of the raptor community will settle and hold the most productive areas. However, they will not nest when food is scarce. In other words the carrying capacity of the land automatically controls the Great Horned Owl population.

Let’s hope that Americans and the rest of the world will sooner or later learn this profound lesson in survival. Do you suppose humans will ever wise up to the owls?