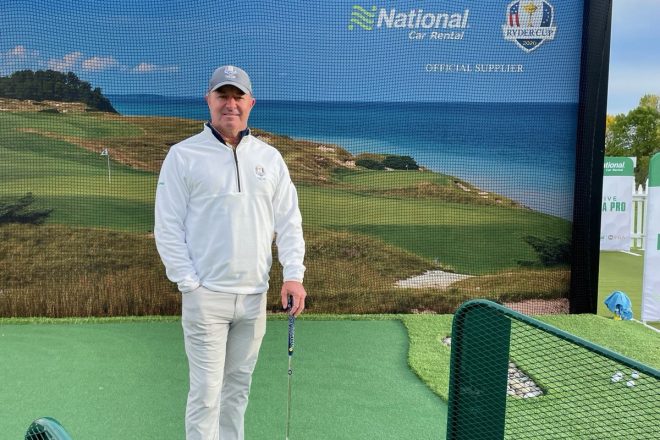 Matt Stottern, sixth-year director of instruction at Peninsula State Park Golf Course, wrapped up his season at the course and then gave free lessons to golf fanatics at the Ryder Cup at Whistling Straits. Stottern encourages golfers to “keep swinging” all winter, even if that means just swinging a weighted club in the garage. Photo by Craig Sterrett.

Before the National Car Rental PGA Lesson Zone opened at Whistling Straits, however, Stottern fielded questions about how Door County golfers can build some permanent improvements into their game before putting away their clubs.

“Keep swinging throughout the fall and winter” were Stottern’s first words of advice.

The John Jacobs Golf Academies-affiliated instructor said he encourages students to do exercises at a gym to stay limber and build the muscles they use in golf. He also tells them to swing a club – preferably, a weighted club – now and then for exercise and to maintain strength and flexibility.

Stottern prefers the Orange Whip Golf Swing Trainer, an extra-long, flexible shaft with a weighted ball on the end. The device can help golfers build clubhead speed, timing and balance. If you time a swing wrong, the shaft will bend forward or backward at the impact area. Hundreds of touring pros use this device, which can benefit beginners, high-handicap players and scratch golfers.

Stottern also encourages his students to get an indoor putting mat to help build consistency and confidence, and he advises doing some indoor chipping if possible.

Although some golfers put away their clubs in September and turn their outdoor focus to fishing and hunting, others feel a sense of urgency to get in more rounds and make improvements before Door County courses close. If you’re one of those, Stottern suggests spending some time analyzing how you played this season. Then try to get better at the elements of your game that gave you problems.

“If you hate bunkers,” Stottern said, “find a sand trap and keep swinging until you get better. If you’re bad at chipping and short putts or long putts, work on those. If you’re awful from 30 to 60 yards out, practice those shots” – and also learn how to keep your ball away from that range in the first place.

Moreover, if players are having trouble with tee shots and fairway woods on long par-4 or par-5 holes, he encourages them to try playing those holes with only an 8-iron or 7-iron. Doing so helps them realize that there are many different ways to get a par or even a birdie, and that they don’t need to hit a long shot with a long club to succeed.

“If people have a hole they don’t like, I’ll have them play it differently,” Stottern said. “A lot of people can play a par-4 the entire way with an 8-iron. Switch it up.”

He said he often plays from front tees so he has to hit a lot of shots that require good touch. Or, he’ll work to control his distance and place tee shots on par-4 holes or second shots on par-5s so that he can have a full swing on his approach from a yardage he likes.

Stottern also encourages his students, including the better golfers, to play the six-hole short course at Peninsula.

“I play that course every day,” he said, noting that the wide variety of yardages of the par-3 holes requires golfers to tee off with many different clubs.

Stottern said many of his students play in golf outings and leagues at Golf ’n More In-Door, an indoor golf facility at 4614 Harbor School Road in Egg Harbor. Plus, some of his students visit him at Orange Tree Golf Resort in Scottsdale, Arizona, where he’s the director of instruction from fall through the spring.

Stottern, who grew up around San Diego, enjoys both his Midwest and Southwest jobs.

If a group of four, eight, 12 or more who played together all summer want to keep up their regular game, Perley can customize a league just for them. She’s also planning a weekly bar league, as well as leagues that will allow people to play just about anytime, post a score on a league leaderboard and see how they performed that week.

Registration will open Oct. 13 – and play will begin Oct. 18 – for a Monday-night league with tee times at 7 and 9 pm. Perley is also planning the Your Day, Your Way Indoor Golf League for two-person teams to play during a time slot of their choice.