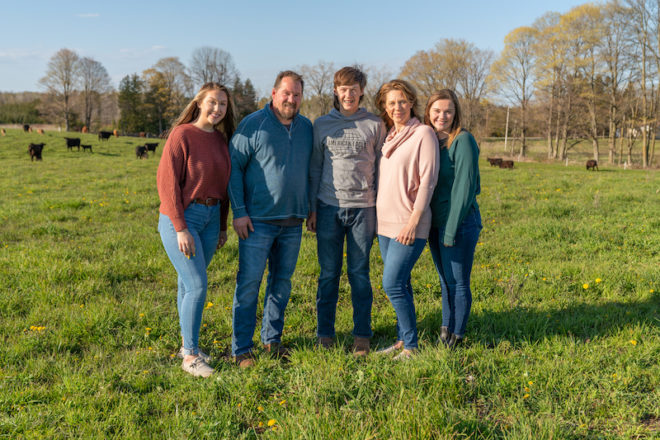 Molly, Chris, Logan, Christie and Lindsay Shuh on the grounds of the family farm between Baileys Harbor and Sister Bay. Photo by Brett Kosmider.

We’re in Chris Schuh’s truck, driving on the long, gravel road that heads east from Door Karma Farms’ storefront on Highway 57 in Baileys Harbor. Schuh, a co-owner of Door Karma, wants to show me more of the farm, but the land we pass doesn’t look like traditional farmland.

He drives past a large swath of land that’s blooming with native wildflowers during my August tour. It’s land that he intentionally leaves uncultivated so the bees can gather pollen. He points out the ponds he’s created so the bees don’t have to travel far to get water, as well as the nearby solar well pumps he’s put in for the ponds. And, of course, there are the hives themselves — too many for me to count before we turn back.

I comment that it seems as though he’s working really hard for the bees.

“It all works together,” Schuh replies.

It’s a telling statement that encapsulates what Schuh does for Door Karma and within the Door County community at large.

Door Karma Farms started in 2017 as a partnership between Schuh and co-owner Bob Limoni, an orthopedic surgeon who had purchased land adjacent to the Mud Lake Wildlife Area in 2010.

Limoni intended to establish a hobby farm, so he started an apple orchard and got some chickens and cattle. But he soon discovered that raising cattle organically — the way he wanted — was challenging, and he admitted that he was in over his head.

Schuh, meanwhile, was working on an organic farm and was ready to start his own venture. A mutual acquaintance introduced them, and Door Karma Farms was born.

From the beginning, Door Karma was a family business. Schuh said his three kids helped choose the farm’s name, and they all work with animals or in the fields. In late 2020, Bob Limoni decided to step away from his farm-management role, but the Schuh family’s commitment to the farm remains as strong as ever.

Door Karma produces beef, lamb, pork, chickens and eggs — all certified organic by the Midwest Organic Services Association. A conversation with Schuh showed how it all starts from the ground up.

“There are 26 different varieties of plants in the pasture mixes,” Schuh said. “We have custom cocktail blends for all of our pastures.”

One example is that Schuh plants sunflowers with corn so that the beneficial sunflower oil gets mixed in as part of the animals’ feed.

“There’s a lot of reward in building soil and creating quality product,” Schuh said. He explained that creating good soil translates into growing good feed, which translates into healthy animals.

“It goes back to karma,” he emphasized, referencing the farm’s name. “It’s all going to come around one way or another.”

Schuh mows and bales for other farms, and Door Karma shares some equipment and fields with another organic farm. Schuh explained that the relationships with other farms and farmers are important, even if those farms aren’t organic.

“Farming is still farming,” he said, noting that he’s learned a lot along the way from other county farmers. He illustrated his point by sharing that the farm just to his north is not organic, but the farmer doesn’t spray his crops on windy days out of respect for Door Karma’s organic growing practices.

During a typical year, restaurants make up about 30 percent of Door Karma’s sales through supplying local establishments such as Fat Belly in Sister Bay.

“It’s some of the best meat I’ve ever had,” Lindsley said.

Schuh said his restaurant customers are willing to be flexible with their orders, depending on what he has, and that makes a big difference.

“They’re all willing to change their menus a bit,” Schuh said.

The bulk of Door Karma’s business comes from retail sales at its farm store. In addition to meat and eggs, the store sells its own microgreens,  seasonal vegetables and mushrooms, along with honey from those hives nestled back among the wildflowers.

The Davises had long been fans of Door Karma’s meat and eggs. When they started their company in early 2020 and were looking for hemp, they were happily surprised to learn that Door Karma had harvested an experimental crop the previous year, and they bought it.

“It was an amazing-quality hemp,” Christopher said.

The Davises explained that hemp draws from the soil, so Door Karma’s organic growing practices were perfect for their product.

“It’s important that the environment where it’s growing is healthy,” Jennifer said. “It’s good to feel confident that the CBD that we’re deriving from the hemp that’s grown here is really high quality, and we feel really good about that.”

For the Davises, the Door Karma partnership goes beyond business.

“We feel good that we’re working with them. It’s almost like a little family,” Christopher said.

The beehives at the farm actually belong to Hatch and produce some of the honey for the distillery’s craft spirits. Hatch co-owner Chris Roedl said that in 2020, he got 40-50 gallons from the Door Karma hives, some of which he set aside for Door Karma to sell.

“I really appreciate and think it’s remarkable the production program they have going there,” Roedl said of Door Karma. He said Schuh was the first person he contacted when starting Hatch, and he expected Schuh to pass him along to someone else.

“Instead, he took the problem head on, as if it was his own,” Roedl said, “and helped me find a solution. That’s just the way they operate.”

In fact, although Schuh’s passion for the land and dedication to quality are evident, when I asked what sets Door Karma apart, it took him a while to answer. When he did, he didn’t want to focus on his own work.

“I want to talk about the community — the restaurants that are willing to change their menus, Hatch Distillery, the farmers that are good neighbors,” Schuh said.

Building the soil, building relationships and building community. As Schuh said, “It all works together.”