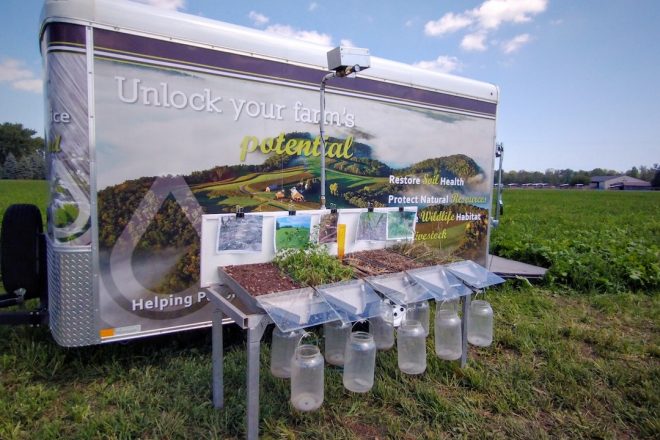 Local farmers escaped their own fields for a day to learn about soil health, overcoming the challenges of no-till practices, implementing cover crops and transitioning to organic standards.

These practices that build soil health, crop resilience and nutrient density are known as “regenerative agriculture,” and both scientists and farmers shared their knowledge about it during the field day coordinated by Peninsula Pride Farms and the Door-Kewaunee Demonstration Farms Network at Deer Run Dairy.

Jamie Patton from the Nutrient and Pest Management Program at the UW-Madison Extension detailed benefits of no-till practices, such as improved soil structure and microbial activity. Tilling promotes too much oxidation, leading to various soil problems. Patton thinks humans started tilling partially to compete for bragging rights about the “best-looking soil.” She said there’s something innate about how “we like to see soil turned over.”

As attendees gathered beneath a tent at the Kewaunee dairy, fifth-generation farmer Rick Clark from Indiana gave a presentation about his regenerative-farming experiences. He looked like a traditional farmer, but one who’s embracing new ideas, evident by his baseball cap with “No Till” written across the side. Clark is also a family man: He began his presentation not with farming terminology, but with a few slides about his daughters and father, stressing the importance of family support in any business.

Clark began implementing green farming practices 17 years ago and has taken the necessarily gradual journey to regenerative farming. He said he needed more than a plan B or C when he started experimenting with no till and cover crops and has gone through plans X, Y and Z. When necessary, he begins again with A.

“Our farm has been turned inside out, upside down, left and right and sideways,” Clark said. “Nothing is the same.”

Clark has found that cover crops do not hurt profit, and they improve the soil health and lead to better production from the next cash-crop harvest. He calls these cover-crop mixtures “cocktails,” and he envisions “cocktail packages prescribed for weed problems” in the future of agroecology. Clark said that 70% of his weed suppression comes from the cover crops, and the remaining 30% from the cash crop starting to canopy. Animals are critical, too: His farm is located right beside a dairy, which puts a nitrogen source right in his backyard.

But that success is never measured by data from just one year. Soil health affects profitability for years, but it builds up slowly over time. Clark never underestimates the power of patience and advises fellow farmers to “slow down and pay attention to what Mother Nature is telling us” – observations that can yield surprising discoveries. He’s learned that yellow-flowered weeds, for example, may indicate a lack of sulfur in the soil.

The day’s programming also took place in a field out front. Barry Bubolz of the U.S. Department of Agriculture’s Natural Resources Conservation Service demonstrated a science experiment with his mobile rainfall simulator. The experiment clearly showed how soil that had not been tilled combatted runoff and erosion by retaining water far better than tilled soil.

A few feet from the rainfall simulator, Patton stood in a five-foot-deep soil pit. She could have stood there the entire day, given the endless stream of conversation that flowed from something as seemingly inconspicuous as the soil beneath our feet.

The pit revealed geological history with its distinct layers of sand and gravel formed by glacial outwash 10,000 years ago. A deep layer of topsoil formed later, now filled with organic matter and the ability to promote biological activity such as earthworms and root systems. As the rainfall simulator demonstrated, cover-cropped soils such as this one hold much more water, and therefore much more biomass.

“Over time we can build this into something even better,” Patton said. “The only way that I can change the available water capacity of this soil is to improve organic-matter content.”

Improving organic matter means creating aggregates as well, she said – clumps of soil that bind together and allow a better exchange of air and water.

Bubolz’s rain simulator and Patton’s analysis of the soil from Deer Run Dairy’s cover-cropped field demonstrated the positive results of Clark’s presentation theme: “Change is Good. Change is Necessary. Change is the Answer.”