Some people may not recognize the buildings that once housed migrants who worked in Door County’s cherry and apple orchards. Much of the housing that remains has either been pressed into other uses, or moved to historical preservation sites. Increasing automation, especially for the cherry harvest, has reduced the need for migrant workers.

The seasonal Hispanic population that in the past made up the bulk of laborers in the orchards has evolved into a year-round presence servicing other areas of the local economy. Few are more familiar with the history of this evolution than Imelda Delchambre and Robert Cuellar. Both came to the county as orchard migrant workers when they were children, eventually made their homes on the peninsula and have raised families. 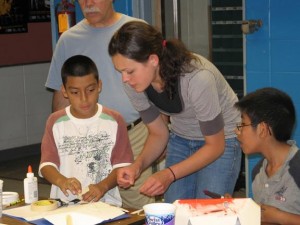 The Hardy Gallery’s 2010 intern, Beth Servais, helps a student at the Art Camp, a part of Gibraltar School’s Migrant Education Program since the early 2000s.

Now Delchambre serves as the president of the Hispanic Resource Center headquartered in Sturgeon Bay, and Cuellar, as the treasurer. Their work in this organization along with their experience as residents in Door County, gives them a unique perspective.

Delchambre, because of her work as an interpreter and social service provider, is locally recognized as someone who has her finger on the pulse of the local Hispanic community.

Northern Door was a different place in 1966 when 12-year-old Imelda first came to the cherry orchards with her parents from Laredo, Texas.

Then, she recalls, migrant workers traveled north mostly from Texas. “Since 1995,” she said, “people come from Mexico, El Salvador, Honduras to work in restaurants, housekeeping, and farming.”

After a 19-year hiatus working as a deputy sheriff in Florida, she returned to Door County in 1990 where she married her second husband, Ernie Delchambre from Institute. For a time she worked as a corrections officer for the Door County Sheriff’s Department, but since 2001 most of her work has been in social services.

Delchambre is employed by the UW-Extension as a nutritionist, working primarily with low-income families in Door and Kewaunee Counties. In addition she has her own business translating and interpreting for Hispanics. “I’m on call 24-7 by the hospital,” she said. 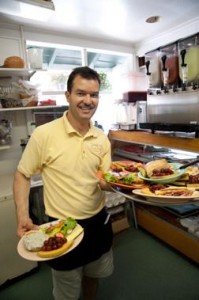 Nino Jauregui, who owns the Summer Kitchen with his brother Armando, loads up with plates to serve.

But her position as president of the Hispanic Resource Center is especially important to her. That organization began in the late ‘90s under the auspices of the Door Memorial Hospital as an umbrella for the Open Door Clinic. The center, which serves both Door and Kewaunee, has evolved during its existence, and since 2007 has become an independent entity operating from an office at 62 South 3rd Avenue in Sturgeon Bay.

Hispanic Resource Center board member Robert Cuellar’s experience as a migrant worker in Door County began in 1964. At age 18 Cuellar came from Del Rio, Texas, with his wife and daughter to work on the peninsula for one year, “And I’m still here!” he said.

After working for Roen’s Orchard in Ellison Bay, he was employed for 30 years by the Berns Brothers Lumberyard in Sister Bay (now Lamperts) and for the last 10 years has worked at Ace Hardware in that village.

He and his wife Rosa raised five children in Door County. “When the kids were small,” he recalled, “I’d take a couple weeks off from work, we’d pick cherries, and the kids would earn money to spend at the fair!”

Hispanics who follow seasonal harvests throughout the country faced a number of challenges, including working conditions, primitive housing, and disrupted education for their children.

Gibraltar middle school teacher Mark Honold has been with the school’s summer migrant program for 28 years and has been awarded the National Director of the Year for Migrant Services. High School Spanish teacher Tom Zwicky has assisted for 13 years. Students are tutored and provided cultural experiences.

He is quick to point out that while the program is open to the children of all ethnic groups (birth through 14), primarily it serves Hispanic families. “The number has been growing,” Honold said, “because families join other family members and because of the opportunities [for employment] in the summer.”

During the past 10 years Honold has seen the percentage of English-speaking parents increase from 50 percent to 75 percent. While he is not fluent in Spanish, “teens translate for parents who are not proficient in English.”

Another change he noted is the improvement in the graduation rate of migrant children in this country from 10 percent in 1965 to 55 percent now of an over-all rate of 75 percent. More migrants, recognizing the importance of education, arrange to have their children remain in one location throughout the year to continue their schooling.

Honold knows about migrant work from his own experience as well, as he was raised near a cherry orchard in the county that provided him with summer work during his youth, and allowed him to observe the incredible hours migrants are willing to work as well as their strong work ethic. But now the need for manual labor in orchards has been reduced by mechanization. “Migrant workers are in the processing plants,” he said, “not the cherry orchards.”

Zwicky, who grew up in Sturgeon Bay, stated that legislation involving housing and hourly pay changed working conditions for migrants. While the need for migrant labor has decreased, the expanded tourist season and other employment now offers opportunities to the Hispanic population.

Door County schools are responsive to the needs of the Hispanic population. Gibraltar, Sevastopol and Southern Door have ELL (English Language Learner) programs to assist Hispanic students with their education; Sturgeon Bay has an ELL coordinator. Because of such factors as the availability of housing and dairy farming employment, Sevastopol has the highest Hispanic student population, about 40 students.

As Gibraltar’s former ELL teacher Kaija Johnson with the help of then middle school Spanish teacher Amy Sterckx, began an English class for parents of Hispanic children. “Helping others to learn a language,” Johnson said, “is one step toward tolerance in a community.”

Tori Martinez, Sevastopol’s EEL teacher, brings special insight to that school’s program as she is married to Mauricio Martinez who was born in Mexico. In addition she has worked “on and off for 17 years at a [Door County] restaurant whose whole kitchen staff is Hispanic.”

Door County schools and the Hispanic Resource Center provide necessary services to the local Hispanic population. Delchambre said that the center is especially helpful to people coming into the area, directing them to available resources, helping them find jobs, providing financial assistance, emergency relief, and sometimes donated furniture and appliances. Her husband transports donations in his pickup truck, and on several occasions, the Delchambres have provided temporary housing in their home for families.

Delchambre, Cuellar, and others emphasize that one of the biggest challenges facing Hispanics in Door County today is transportation, as many do not qualify for driver’s licenses and as a result can not drive legally.

Martinez praised businesses and churches for their support of the Hispanic population, but added that while helping out with donations of money or food is good, that people can also provide assistance through their political activism, especially regarding the driver’s license issue.

One of the goals of the Hispanic Resource Center is, in the words of Delchambre, to provide a bridge between two cultures. In addition to offering needed services to Hispanics, the organization sponsors festivals that feature food and dancing for Cinco de Mayo (May 5), for Mexican Independence Day (September 16), and other holidays unique to the culture.

Money raised from these events funds the center’s charitable activities.

But both Delchambre and Cuellar have high expectations of the Hispanics they serve. “If they commit a crime,” she said, “and knowing do so, they can go back to their country and stay there!” And Cuellar advises Hispanics to learn English and use it.

The involvement of Hispanics in Door County life is far different today than it was back in the early days of orchard work. The area has seen the emergence of Hispanic-owned businesses: El Sazon Restaurant, the Summer Kitchen, Chuy and Teo’s Roofing, Carlos Torres Roofing, and Sparkle Cleaning.

The Saints Peter and Paul Catholic Church in Institute offers a Mass in Spanish each week.

Gibraltar Superintendent Steve Seyfer speaks with pride of the assimilation of Hispanic students into the social fabric of the school, of a young Hispanic elected by her classmates to be prom queen, of a Hispanic from the community who was brought in to be a part of a Friends of Gibraltar Elder Wisdom project, and of a Hispanic young man who performed music with a visiting artist.

These examples, Seyfer said, “reflect how our school recognizes the importance of Hispanic families in our school and community.”