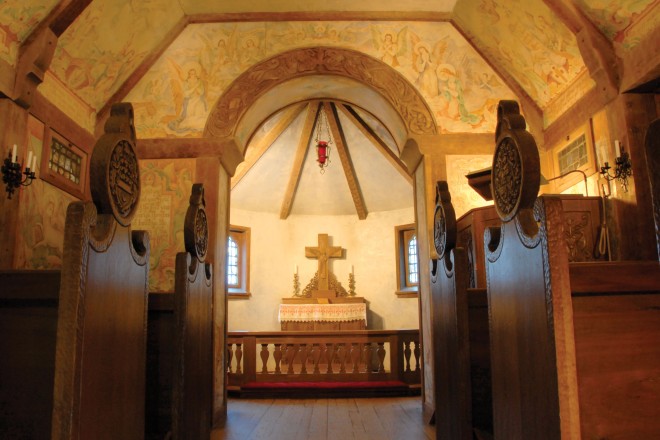 It’s a frosty Sunday morning in March and I’ve found myself standing in silence in front of a building I’ve passed by hundreds of times in my life. It’s eerily silent for downtown Fish Creek, and the only sound I hear is the lake wind screeching off the ice and swirling down Main Street from Sunset Park, tousling and swaying the cedars as it rushes past.

The Church of the Atonement stands as a silent sentinel here, its white walls nearly blending into the snowy landscape behind it. The ground at my feet is undisturbed, and I notice that I am the only pair of footprints to have ventured this far into the churchyard since the last big snowfall. In a few short months, this same church will appear differently as Door County wildflowers and lush trees grow in around the building giving it a nestled look, as if the church itself has sprung from the ground. The Church of the Atonement always had a mystical, elfish appeal to me, even as a child, and the decades that have lapsed between the mystery of youth and the present have done little to alter its timeless façade.

Winston Churchill once said of architecture, “We shape our buildings:  thereafter they shape us.” Architecture, like all forms of art, seeks to express some aspect of human beauty – to be a noble haven for a noble race. The buildings in and around Door County lend themselves to its unique history and people, and the influences in architecture range from Norwegian and Icelandic to English and Belgian. Regardless of the country of influence though, the buildings stand to remind all visitors of the distinctive minds that shaped the buildings that shape us, and at the heart of the county’s buildings are its churches.

The Church of the Atonement

The Church of the Atonement is the oldest church in Fish Creek. It resides near the grounds of what was originally the Welcker’s Resort in the late 19th century on the corner of Main Street and Cottage Row. A Fish Creek resident named Charles Gesler sold his unfinished fishing shack to the Episcopalian Diocese of Fond du Lac for $125. The church, at that time, was officiated by Bishop John Henry Hobart Brown of the Diocese, who conducted the first service in Fish Creek on August 12, 1877.

The English-influenced structure is considered Carpenter Gothic, an architectural style known for its adapted Gothic elements like steep gables and pointed arches. The Church of the Atonement, like other Carpenter Gothic structures, is relatively unembellished and simple. The board and batten siding contributes to its unfettered appearance, pointing to undisturbed landscape around it.

“We’re very concerned with preserving the look of the place,” explains George Harmon, a member of the vestry board of governors for the Church of the Atonement and a professor of journalism at Northwestern University. “Much of our focus as a congregation is to ensure the future of the church without altering the appearance.” To that end, the church was entered into the National Registry of Historic Places in 1985.

Approximately four years ago, the church was in need of repairs due to a crumbling foundation. “In order to preserve the original aesthetic, we jacked up the entire building to augment the foundation, where we replaced original timbers that were 130 years old,” Harmon said.

The Church of the Atonement was a year-round church originally. In the winter, the seating capacity went from 85 to 65 to make room for a wood stove. The distinctive tower and the timeless rock wall were added in 1895. The church went for years without electricity or running water.

“Parishioners would have prayer by the light of a lantern hooked up to a boat battery, and about six or eight years ago we put in a well, so now we don’t have to carry water for coffee,” Harmon says with a chuckle. This unpretentious and grassroots approach to worship is mirrored not only in the generations of parishioners who attend the Church of the Atonement (now open only in summer months) but also in the structure’s simple beauty.

A remarkable story of creative energy and devotion lies in the designing and construction of the renowned Boynton Chapel at Björklunden.

Björklunden Vid Sjon, Norwegian for “Birch Forest by the Water,” is a 425-acre estate on the Lake Michigan side of the peninsula just south of Baileys Harbor. The property was purchased for $2,000 in 1928 by Winifred Boynton and her first husband, Carleton Vail. With a mile of uninterrupted shoreline, the haven was bequeathed to Lawrence University in 1962 by the Boynton family.

After her husband Carleton’s untimely death, Winifred traveled in Europe to leave the pain behind, and while she was abroad, she saw a Stave church in Lillehammer, Norway. It was then that she decided that a chapel of the Norwegian architectural tradition would be a perfect fit for her beautiful property among the birches in Door County.

The Stavkirke architectural tradition refers to the use of vertical posts, and is an enduring style of construction utilized in Norway during the late 12th century. It was used during an historical era when paganism was slowly relinquishing to Christianity; therefore, relics of both religious traditions are evident in many Stavkirke buildings.

Winifred writes in her book, Faith Builds a Chapel, “Gradually pagan idols [in the churches] were replaced by Stavkirke whose sharply pointed gables, rising one above the other, becoming smaller as they mounted skyward, seemed to presage the coming of a new era…”

Construction began on Boynton Chapel at Björklunden in the summer of 1939, during the onslaught of World War II, and would continue through 1947. Neither Winifred, nor second husband Donald Boynton, had any formal training in woodworking, carving, or painting when they began their architectural journey with the chapel. The couple would take wood carving lessons and teach themselves skills and craftsmanship at their winter home in Highland Park, Illinois. They devoted snowy Chicago evenings to carving pieces for the chapel in their workshop.

Keeping with pagan tradition, Winifred wanted carved dragon heads at the end of each of the 52 roof joists to ward off evil. During the summers, Winifred painted the 41 murals that now decorate the walls and ceilings of the chapel. Most impressively, however, is the intricate baptismal font, carved of seasoned Wisconsin white oak, which presents all 12 apostles. It weighs just over 130 pounds and took 656 hours for the Boyntons to complete.

The chapel itself, now a popular place for summer weddings, is a testament not only to the artistic vision of the Boynton family, but also their dedication to faith and peace. With the war raging on during the years of construction, the Boyntons looked to their chapel as a haven during a period of destruction.

The Island Stavkirke, located on Washington Island, is a more recent addition to the county’s impressive structures. Also created in the Stavkirke tradition, the foundation for this building began in October 1991 by Washington Island carpenters on a largely volunteer basis. The men and women of the Trinity Evangelical Lutheran Church worked for four years and the building was dedicated in August of 1995.

The structure is patterned after the Borgund, Norway church built in 1150 A.D. At one point in history, there were more than 1,000 old Stave churches standing; presently, only 33 remain.

The architecture of the building greatly resembles that of Viking shipbuilding. There are 12 center staves, or masts, along with tongue and groove joinery, ship “knees,” and heavy wrought iron bindings. Much like the Boynton Chapel, carvings are indicative of both Christian and pagan religious symbols.

One of the most impressive aspects of the building is a model of a mackinaw schooner suspended from the rafters. John Herschberger, the head carpenter for the project, handcrafted the ship from cedar net buoys used by the renowned island fisherman Carl Richter in the 1920s. The schooner appears as a marriage of the Washington Island traditions of fishing and sailing, while the church itself serves as a commemorative edifice to Door County’s Scandinavian heritage.

Spring has sprung around the county, and the forest floors are covered with trilliums and wildflowers. After a long, latent winter, life has returned to our little peninsula. I’m reminded of those frosty, ephemeral winter days and the quiet. Thankfully, there are still places in the county where peace and solitude can be found even in the busy din of a Door County spring:  churches. And when you get there, stop. Look up. Consider the hours, the heart, the tradition, and the meditation that went into building these amazing structures.