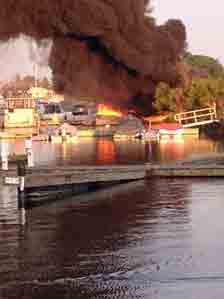 Thick smoke enveloped Sturgeon Bay from the three boats on fire at Quarterdeck Marina on Aug. 25.

• Firefighters were able to contain an early morning garage fire on Aug. 23 at 3049 County E in Baileys Harbor. Gibraltar Fire Chief Caleb Whitney served as officer in charge because Baileys Harbor Fire Chief Brian Zak was out of town at the time of the fire. The fire destroyed the garage and did some damage to a two-story addition, and some light smoke damage to the main residence. In addition, a pickup truck was destroyed by radiant heat and a compact car suffered some damage. There were no injuries, and even three cats made it out of the home, which is owned by Joni Woods. Whitney said the call came in at 2:57 am Aug. 23, and was called in by the owner and a neighbor. The fire was under control by 3:30 am, but firefighters remained on the scene until 8 am. All six Northern Door fire departments responded, as well as Door County Emergency Medical Services and Door County Sheriff’s Department. Whitney said the garage roof collapsed, and Polich Excavating had to be called in. Due to that, evidence that might have determined the cause of the fire was destroyed, however, it was determined that the fire was not suspicious.

• The cause of a fire that destroyed three boats at Skipper Bud’s Quarterdeck Marina in Sturgeon Bay on Aug. 25 remains under investigation. All three boats were a total loss, and a fourth boat was saved by firefighters who pulled it away from the burning vessels.

• On Aug. 25 the Southern Door School Board voted unanimously to present a one-year, non-recurring referendum to the community authorizing the district budget to exceed its revenue limit by $390,000 for the 2015-2016 year. “Because of the continued decline in state revenue, we have been forced to make significant cuts to our programming in the past several years,” said Board President Chuck Bretl. “We recognize that our community bears a significant burden in supporting our schools, and we are extremely grateful for the community’s support. In order to continue to meet the high academic standards for which our school is known, we are asking for this additional funding which will cover the projected budget shortfall for next year, covering ongoing costs to maintain current educational programming.” In the past 10 years, state aid to Southern Door Schools has decreased by 51.6 percent. The district has made many significant funding cuts, including the reduction of health insurance costs by changing carriers, freezing staff wages, cutting staff positions, reducing programs and increasing student fees – already realizing a saving of more than $900,000 off projections for the 2015-2016 school year. “Staff have worked hard to maintain our high standards through these budget cuts,” said Superintendent Patti Vickman, “but simply put, making more cuts will have dramatic consequences on academic offerings as well as extracurriculars, affecting our most precious resource – our children.” Upcoming informational sessions will be offered throughout the community, giving voters the opportunity to understand the reasons for decreased state funding, and the need for additional local revenue in order to maintain current programming. The referendum question will be presented to Southern Door voters on Nov. 4.

• Kewaunee County reports that County S will be closed an estimated four to six weeks as crews replace culverts and mill and repave the roadway. The detours from Door County as you are going south are as follows:  If you are heading south on County U from Door County you will be detoured to County J, crossing County S, to Hwy 42 and then turning south; if you are southbound on County S you will be detoured on County J to Hwy 42 and then turning south. These will also be the detours coming from the south heading north. The road will be open to get to the businesses on County S in Door County – Weinke’s Market and Renard’s Cheese.

• On Tuesday, Sept. 9, 2014, the Kewaunee County Land and Water Conservation Committee will hold a public hearing regarding a proposed Public Health and Groundwater Protection Ordinance. The hearing will begin at 12:30 pm and is scheduled to end at 2:30, at the Kewaunee County Fairgrounds Main Exhibit Building, in Conference Room 142, 625 Third Street, Luxemburg. The proposed ordinance will prohibit the unconfined stockpiling and/or land application of wastes on land areas within Kewaunee County having soil depths to fractured carbonate bedrock of 20 feet or less during the time period of Jan. 1 through April 15, unless an exemption is granted through the Kewaunee County Land and Water Conservation Committee. If adopted by the Kewaunee County Board at the Board’s September monthly meeting, voters in each Township will have an opportunity during the April 2015 elections to approve (by referendum) the county’s administration of the ordinance within their specific town. The text of proposed ordinance, and reference materials, can be viewed at co.kewaunee.wi.gov. Copies can also be requested via email from Andy Wallander at [email protected].

• Jam and Oink for Josh is a benefit being held for Josh Fischer, a Baileys Harbor man who suffered severe head trauma due to a bicycle accident earlier this year. Money raised will help him with extra medical and future expenses due to rehab. There will be live music and BBQ. It will be held Sunday, Sept. 7, from 3 to 8 pm at the DC Deli in Baileys Harbor. Entertainment by Door County folk artists Mark Raddatz, Kevin Johnson, Seth Raddatz and Mary Beth Mattson. BBQ plates will be smoked and served by DC Deli for a $10 donation. Raffles, including many pieces by local artists, will be going all evening. If you have any questions or would just like to send a donation please contact Pete D’Amico at 920.421.1466.

• The Southern Door School District needs your help in connecting with members of the 1989 State Championship Football Team. The State Championship Team will have its reunion at the Friday, Sept. 26 homecoming game against Sturgeon Bay. The team members will be announced just before the start of the 7 pm game. Let team members know they need to contact Jesse Harness at 920.866.2012 or email [email protected] to RSVP or for additional information. Anyone in the public can participate or be a sponsor in a special golf outing organized by the team on Saturday, Sept. 27 to raise funds to purchase new football uniforms. Go to this link for more details:  http://tinyurl.com/pfpqfo8.