Body Believes to Be Dr. Whiteside

On July 22 at 12:20 pm, the Door County Sheriff’s Office was notified of the discovery of a body in the Township of Liberty Grove. The Headwaters Search and Rescue K-9 Group had been conducting a search and located the human remains. The remains were found among some trees on an uninhabited parcel off of German Road. Deputies arrived and secured the area. The State Crime lab was contacted to assist with processing the scene. A search warrant was obtained for the property. Preliminary indication suggests that the remains are that of the missing Dr. Jeffrey Whiteside, based on the clothing and personal property. Whiteside has been missing since June 29. A positive ID, cause and manner of death will be determined by the Medical Examiner. The Door County Sheriff’s Office would like to express their deep gratitude to the Headwaters Search and Rescue K-9 Group for their hard work, dedication and perseverance in assisting with this investigation. 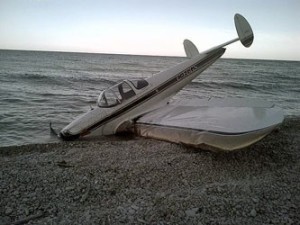 • U.S. Customs and Border Protection’s (CBP) Office of Air and Marine (OAM), rescued a Canadian citizen after his plane crashed into Lake Michigan. An OAM A-Star helicopter crew was instrumental in the rescue of downed pilot. At approximately 7 pm on Saturday, July 18, an OAM A-Star helicopter crew was returning from a mission in northern Michigan when they heard a Mayday call from a pilot in distress. The crew quickly determined the aircraft in distress was nearby and responded immediately to the small island of St. Martin. Shortly thereafter, the aircrew established communications with the wife of the downed pilot, who was circling the crash site in a separate aircraft. After establishing communications, the OAM crew located the downed airplane, and found the pilot, identified as Robert Kelly a Canadian citizen, exiting the aircraft. The crew landed their aircraft on the rocky beach near the crash site. Kelly was found with only minor injuries. After rescuing Kelly, the crew transported him to the Escanaba Airport, where he joined his wife. The NTSB and Federal Aviation Administration will investigate.

• At 10 am on July 18, officers were dispatched to a disturbance at the Dorchester nursing facility in Sturgeon Bay. As officers were en route, dispatch informed them that two nursing staff were injured by a male who was still on site. Upon arrival officers arrested a 56-year-old Oswego, Ill., man. Officers later learned that the male had attempted to remove his mother from the facility and in the process injured two nurses. The nurses were both transported to Ministry Door County Medical Center for their injuries. The Oswego man is being held at the Door County Jail on two felony charges – strangulation and substantial battery – and two misdemeanor charges – battery and disorderly conduct.

• Aug. 1 will mark a shift in the provision of long-term care services for frail seniors and persons with disabilities in Door County. Services delivered for decades by the county Department of Human Services (previously Community Programs and Social Services) under Medicaid waiver programs are transitioning to the state’s managed care model, Family Care. More than 185 individuals will transition from the county-run program. The majority of cases will switch to Family Care on Aug. 1; a small number will remain with the county until Sept. 1. A great deal of planning has occurred on the part of staff from Human Services, the Aging and Disability Resource Center (ADRC) and the Managed Care Organizations (MCOs) to help ensure a smooth transition for all consumers. Enrollment counselors from the county’s Aging and Disability Center have been working with consumers to help them select and enroll in one of two MCOs serving the county, Care Wisconsin or the Lakeland Care District, or two self-directed options, IRIS (I Respect I Self-Direct) or Connections of Lutheran Social Services. The Aging and Disability Resource Center will continue to be available to support individuals enrolled in Family Care, as well as any county resident seeking information or resources for seniors or persons with disabilities. Family Care is a Medicaid-funded program providing cost-effective, comprehensive services and supports to people in their homes and communities. Once the program is fully implemented, Family Care will end waiting lists for long-term care services. At the July 28 Door County Board meeting, Chairman Dan Austad will recognize the contributions of several county employees and contracted case managers who have provided long-term care services in recent years – Linda Stone Winter, Patty Tschech, Katelyn Kubacki, Amber Stiles Evers, LuAnn Desotelle, Megan Schmidtman and Bob Desotelle.