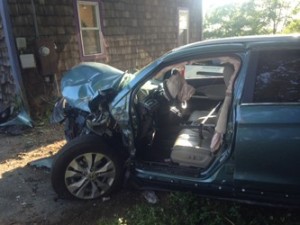 • At about 4:42 pm on Saturday, Aug. 22, the Door County Sheriff’s Office was notified of a one-vehicle personal injury crash at the intersection of Hwy. 42 and County E in the Village of Egg Harbor. The vehicle was westbound on E and failed to stop at the stop sign at Hwy 42. The vehicle crossed the highway and entered the driveway at 7901 Hwy 42 where it struck a building. The lone female driver was extricated from the vehicle with a severe leg injury. She was transported to Door County Medical Center by ambulance and then flown by helicopter to St. Vincent’s Hospital in Green Bay, where she died. The driver was identified as Roberta Nauman, 79, of Elgin, Ill. The sheriff’s office continues its investigation.

• Governor Scott Walker approved $475,000 to build a new single-span concrete deck bridge on Hwy. 42 between County X and County J in the Village of Forestville. Work is scheduled to begin Monday, Aug. 31, and finish by the end of October. Pheifer Brothers Construction Company, Inc., Neenah, is the prime contractor. This project involves removing the existing box culvert and replacing it with a new bridge, better meeting current standards for vehicle loading and structure design. Work also includes curb and gutter, storm sewer and pavement marking. Hwy. 42 will be closed between County X and County J for the entire project. The detour is County X, County D, and County J. Local access will be maintained on each side of the bridge.

• Ongoing surveillance efforts this summer found no new evidence of Asian carp in the Milwaukee and Fox rivers as part of work completed by the U.S. Fish and Wildlife Service in cooperation with the Wisconsin Department of Natural Resources. USFWS biologists tested 160 water samples collected across three sampling dates in May and June for genetic evidence of silver and bighead carp. None of the samples tested positive for Asian carp DNA. Bob Wakeman, DNR’s aquatic invasive species program coordinator, said the testing represents an important tool in the ongoing effort to prevent the spread of silver and bighead carp into the Great Lakes. Asian carp pose significant ecological and economic threats to the Great Lakes region and its fishery because they eat voraciously and compete directly with valuable native fish for food. “We certainly appreciate the U.S. Fish and Wildlife Service conducting this monitoring and giving us this good news,” Wakeman said. “The continued negative results reinforce other findings that positive detections in 2013 near Sturgeon Bay and 2014 in the Fox River near Green Bay were likely from sources other than live fish.”

• Have You Ever Had Polio? is the theme of a program, sponsored by the Rotary Club Door County North.  The presentation will be held Wednesday, Sept. 2, at the Immanuel Lutheran Church, Bailey’s Harbor, beginning at 7:45 am. Bob and Mary Williams, and Terrill Arnold from Stevens Point, are the presenters. Bob, Mary and Terrill have given this program to raise awareness about post-polio syndrome to 18 Rotary Clubs in Wisconsin and Northern Michigan. It is estimated that 20,000 people are polio survivors in Wisconsin. It is, also, estimated that 50 percent of those survivors will contract post-polio syndrome. Only polio survivors contract post-polio syndrome.  If you are a polio survivor, the syndrome may cripple you or cause a polio-like illness even though you had polio many years ago. As Bob Williams, a polio survivor and person with post-polio syndrome, preaches “My exercise routine and periodic meetings with a physical therapist are the tools keeping me out of wheel chair.” This program is open to the public. Please call 920.839.5481 to make a reservation if you would like to attend this presentation. There is a nominal charge for breakfast. Rotary International has worked to eradicate polio from the world. It is the largest public health effort by any organization in the history of health care.