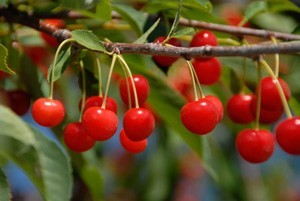 If last year was the pits for Door County cherry farmers, this year may represent the storied bowl of cherries crooners used to sing about.

Choice Orchards (choiceorchards.com) opened its Montmorency orchard to the pick-your-own crowd on July 20 and they hope to go as late as Aug. 9.

“It’s been wonderful,” Staats said. “People are having a good time because they don’t have to work so hard picking.”

Staats also reported what turned out to be a common theme among peninsula cherry producers.

“The trees as so full, the limbs are breaking off some of our older trees,” she said.

“There’s just too much weight on the 25-, 30-year-old trees because of the size and number of the cherries. You hate to see that, but it’s part of the game, too,” he said.

He added that technology is part of the reason for the broken limbs. Today’s cherry trees have about a 30-year lifespan.

“Years ago they lasted longer with handpicking, but now with the vibration from the shaker, 25-30 years is about it,” he said.

Other than that, Lautenbach is happy with the cherry season so far.

“We didn’t have anything last year, so it’s a good feeling to see the cherries on the trees,” he said. “People are really buying cherries. I think it’s because there were none last year. It seems there’s more pick-your-owns this year. Seeing that enthusiasm has been great.”

“Everything’s looking pretty good, so far. We’ve got a great crop. The fruit is good quality and nice size after the rain we got. If we get a wind storm or hail storm, that could change things.”

But without threatening weather, Lautenbach expects this year’s crop in Door County to exceed the projected 9.2 million pounds.

“I think it could go higher, especially if all the cherries get harvested,” he said.

Like Staats, Lautenbach noted that the cherries are easy picking this year.

“They’re pulling off the tree easier than I’ve experienced. I’m thinking part of that is the moisture we had and last week’s heat might have helped,” he said. “They’re pulling like it’s late in the season.”

Kendra Sohm, marketing and sales manager at Lautenbach’s, said they expect to be harvesting through mid-August thanks to a supply of Balaton cherry trees that blooms later than the Montmorency crop.

“The Balanton is a tart European variety that allows us to extend our cherry harvest,” she said. “Balantons are a little darker in color, but good for eating and baking, very versatile.”

“It’s going to be a good season. There’s a lot of fruit out there,” said Robin Seaquist of Seaquist Orchards in Sister Bay (seaquistorchards.com), which has 950 acres of cherries. Seaquist doesn’t have pick-your-own cherries, but harvests and processes their own cherries and those from other Door County producers during the six-week season, with about 20 people harvesting in the orchards and another 50 processing at their plant.

“People sure are interested in cherries,” Seaquist said. “Our farm market has been taking a lot of phone calls, and people are coming to get them fresh right off the line.”

She also expects the price of cherries to be adjusting downward soon to make up for the increased costs applied during last year’s shortage.

“That should be good for the consumers,” she said.