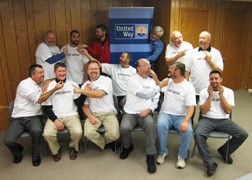 Participants in the Burly Beard Smackdown recently gathered for the second in a series of four photos to document the men’s hair growth throughout this year’s United Way of Door County campaign.

This year’s campaign goal is $480,000, which, if reached, will support dozens of human needs programs throughout the county.