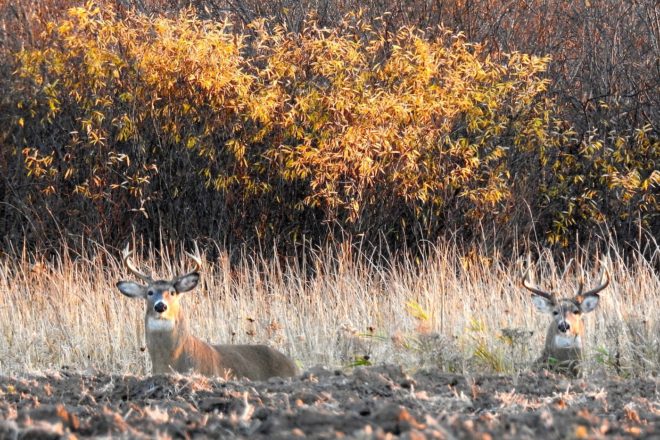 Mature whitetail bucks are on the move as the annual rut, or deer mating season, nears its peak. Photo by Kevin Naze.

We’re just a week away from Wisconsin’s gun deer opener, and all signs are pointing to much nicer weather than the Arctic blast we’ve experienced this week.

A day after writing last week’s column, the long-term forecast took a big nosedive south. It was too late to change the column’s wording for the print edition, but thankfully, my words calling for warm air and lots of rain this week were edited out of the online version by request.

This time around, after a check of multiple sources, I’m confident in calling for an opening weekend with temperatures from the upper 20s for lows to upper 30s for highs. Precipitation-wise, some sites are forecasting light rain and snow next week. Depending on the temperatures, that could mean tracking snow for the opener – or not. Winds could be from the west at 10 miles or an hour, or they could just as easily be howling from the north, south or east at 20.

Let’s face it: Weather forecasting has come a long way, but 10 days off, it’s still a shot in the dark.

This time, all I’m calling for is a 100 percent chance of a lot of hunters seeing deer and some not. One thing’s for sure: You won’t know unless you buy your license and give it a shot.

Year-to-date gun deer license sales through Nov. 6 were running about 17,000 behind last year, but the Nov. 23 gun opener is six days later than it was in 2018. About half of the licenses are purchased during the final week before the opener, including more than 100,000 the day before in some years!

Meanwhile, archery license sales have continued a downward trend since crossbows for all came on the scene five years ago. Sales were off about 3,000, but crossbow sales jumped close to 10,000.

Anecdotally, it appears that not only are more hunters choosing crossbows over vertical, but also some former gun-only hunters may be getting into deer hunting earlier with the gun-like stock and scope of a crossbow.

Even with the DNR’s 140-page report concluding there’s no biological reason to reduce crossbow opportunities, I expect the controversy will heat up during the coming year.

Nearly 300 female king salmon (out of 1,400-plus fish there) were spawned on the Kewaunee River, producing an estimated 1.6 million eggs. There were more than 600 cohos seen there, and 206 of them produced an estimated 596,000 eggs.

Meanwhile, the Root River at Racine saw more than 1,200 coho and more than one million eggs taken from 728 fish on site.

Seeforellen-strain brown trout caught with electrofishing on the Kewaunee and other rivers will be transferred to ponds at the Besadny Anadromous Fisheries Facility west of Kewaunee and spawned later this month. The first egg take is scheduled for Nov. 20.

More than four of every five of Wisconsin’s lakes and rivers recently assessed by the DNR are healthy, continuing a trend of improved surface-water quality across the state.

A total of 116 listings were removed, including 84 due to a cleanup of residual mercury. In contrast, 120 new water bodies or segments of rivers are now classified as impaired, bringing the total to 1,546.

The DNR is using two lists to categorize them – Impaired Waters and Restoration Waters – which aligns its methods with those of neighboring states.

Written comments on the new listings will be accepted until Nov. 22 by emailing [email protected]. See the complete list and learn more at dnr.wi.gov using the keywords “impaired waters.”

You don’t have to shoot a monster buck or bull to be a member of the Boone & Crockett Club. The club’s Associates Program was created more than 30 years ago for individuals who support ethical, fair-chase hunting and conserving wildlife and habitat.

A $35 fee goes to support the club’s ongoing efforts to ensure that wildlife and wildlife habitat are given the attention they deserve and that our sporting heritage is preserved for future generations. Fair Chase Magazine is just one of the benefits. Learn more at boone-crockett.org.

When DNR and U.S. Fish and Wildlife staff conducted aerial waterfowl surveys over Green Bay recently, they observed more than 35,000 ducks, including roughly 20,000 scaup. See some photos from the air, and learn more at dnr.wi.gov using the keywords “waterfowl surveys.”

Whitefish are spawning in Lake Michigan tributaries such as the Menominee, Peshtigo, Oconto and Fox and can be caught on small baits such as salmon eggs or wax worms on a small jig or hook under a bobber.

The DNR is seeking comments by Nov. 25 on a draft document, “Chronic Wasting Disease: Responding to New Wild Deer Detections in New Locations.” Search for “CWD Response Plan” at dnr.wi.gov.