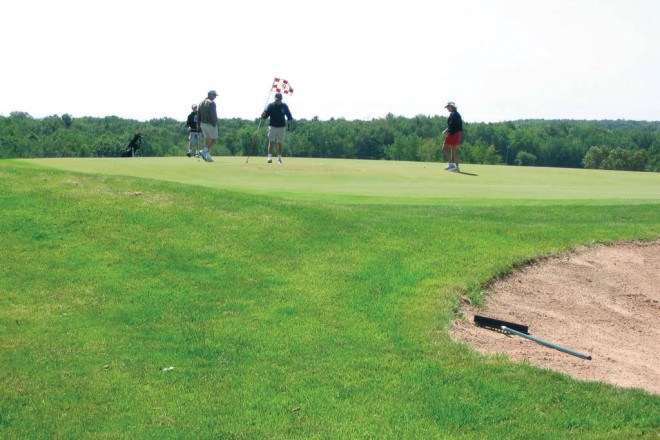 “I’d never been a superintendent, never grown a course,” he says. “It was a big onslaught of information. But we had phenomenal backing and a great architectural team.”

The course was the most highly anticipated and hyped in Northeastern Wisconsin since the Green Bay Country Club had opened in 1994, and received rave reviews from the start. Hailed as one of the best new courses in America by Golf Digest, it quickly earned a reputation as one of the top courses in Wisconsin. 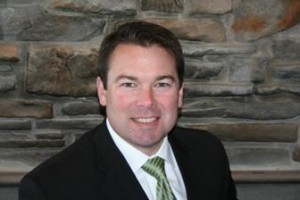 Brian Ferrie has been with Horseshoe Bay Golf Club for 12 years.

The club was born as Frank Cowles’s tribute to the dream of his grandfather, Frank E. Murphy, who first envisioned an elite private club on the grounds of Horseshoe Bay farms in 1916. Murphy built a clubhouse and marketed Door County as “the California of the north,” but it didn’t catch on; and when the Great Depression hit, Murphy’s dream faded.

With the real estate market booming in the 1990s and golf courses being built at a record pace (the number of courses nationwide grew by 20 percent in the 1990s, with Door County adding three), Cowles resurrected his grandfather’s dream. He poured an estimated $12 million into the course, designed by Jack Nicklaus design protégé Rick Robbins.

With plans for 85 – 95 single-family residences and 150 condominiums ringing the grounds of the course, developers aimed to cash in on the craze for a piece of the Door Peninsula. But the fairytale start soon clashed with the stubborn buzz saw of economic reality, and the club found its reputation entangled with the confusion and struggles of the real estate arm of the development.

The golf boom cooled across the country, and courses began to close at the rate of two a week. Signs of the real estate bubble began to show, and the flooded Door County condo market stalled with it. Fissures grew as management of the development grew unfocused. Then Frank Cowles died in 2004, which those associated with Horseshoe Bay cite as a turning point for the development.

“It was always his dream,” Ferrie says.

A series of changes in ownership and management structure confused the public, potential buyers, and even the club’s membership. The well-oiled Door County rumor mill didn’t help matters, and General Manager Ken McIntyre says the impression people have of the golf club suffered as a result.

“The golf club still gets caught up in the failures of the development,” he says. “Each foreclosure reflects on the club.”

While the real estate portion of the development has been in flux, the golf club has actually been remarkably stable. Ferrie has been with the club since ground was broken, and McIntyre says eight of the club’s top 10 managers have been in place for at least five years. From 2002 – 2008, Troon Golf was contracted to manage the course but never had an ownership stake. The club has had just two owners, the Cowles family and Glenn Timmerman, who led an ownership team that bought the golf club from the Cowles family in 2007 for $2.9 million. 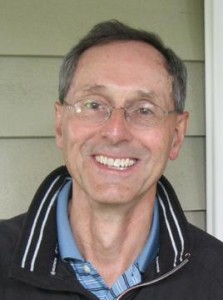 When Timmerman bought the club, he set about the difficult task of separating the reputation of the club from that of the development. But the biggest source of frustration among members has nothing to do with the actual course or the real estate, but with the fluctuation in the membership fee structure.

Horseshoe Bay Golf Club opened as a semi-private club with a multi-tiered membership structure, with a full membership for $8,000, a silver membership for part-time residents for $3,000, and a social membership that bought only access to club amenities, but not golf.

In 2003 the club went private and raised fees, which topped out at $25,000 in 2007. When that high-end strategy failed, joining fees were rolled back, this time to $5,000 for a full membership, raising the ire of those who joined at the higher price point.

“We understand that frustration,” McIntyre says. “But we recognize that for most of our members, this is their second or third club. Most of them are transient, with only 15 – 20 percent full-time residents. We needed membership levels that met that need.”

Lowering the fee helped them add 50 new members over the last three years, according to McIntyre. “We’d rather have a member for 20 years than have the $20,000 up front.”

McIntyre says the strategy at Horseshoe Bay is a reflection of the dramatic changes in the golf business since Cowles first went to the drawing board in 1995. “It’s a new world in the private club business.”

“We’ve broken the mold of what a private club usually does,” says Ferrie. “Some of the older membership still has that old perception of what a club should be.”

Jim Bashleben of Jacksonport has been a member of the club for seven years.

“It’s one of the favorite places I’ve ever played,” he says.

Bashleben has been a member of clubs in Wisconsin and Florida and says any problems at Horseshoe Bay aren’t unique to one club.

“If people have been around the country, the private club is facing challenging times,” he says. “I think they’re doing the best they can to be fair and equitable. It’s no different than any business issue.”

The Clemson University Center for Real Estate Development released an exhaustive report earlier this year that detailed the tenuous state of the golf industry nationwide. In the 1990s, the study authors concluded, “too many golf courses were built, too much spent on developing them, and, as a result many of these golf courses are not financially viable enterprises.”

The number of players, rounds, and courses across the country peaked in 2000 and has declined ever since, with 128 courses closing each year since 2006. Many of those courses failed because they were tied to real estate developments, which suffered when the housing bubble burst. But National Golf Federation president Joe Beditz said there’s more contraction to come, estimating that the industry could stand to lose at least 1,500 more courses.

In spite of those trends, McIntyre says that Horseshoe Bay Golf Club is stronger than ever and there are no plans to return to semi-private status, as some members have suggested.

“Our ownership and management are committed to providing members and guests with a great experience.”

Timmerman said his goal when he bought the course was to shore up operations and maintain its reputation, then sell it. Golf Digest rated it the 8th best course overall and the 4th best private course in Wisconsin in its most recent rankings. Timmerman now has the course for sale with a price tag of $3.5 million.

Confident in the course and the business, McIntyre and Ferrie say they want to cultivate a more approachable image for the course.

“I’d like people to perceive us as part of the community,” Ferrie says. “Ken is on the Sturgeon Bay School Board, and I’m here, my family and I are certainly ingrained in the community. The golf club, to me, is like one of my children, I helped bring it up.”

“We’re not exclusionary,” McIntyre says. “It’s still golf. When it comes to groups and outings, I hope people will just pick up the phone and call us. We’d love to do more.”

After a tumultuous first decade, McIntyre says the club is firmly rooted.