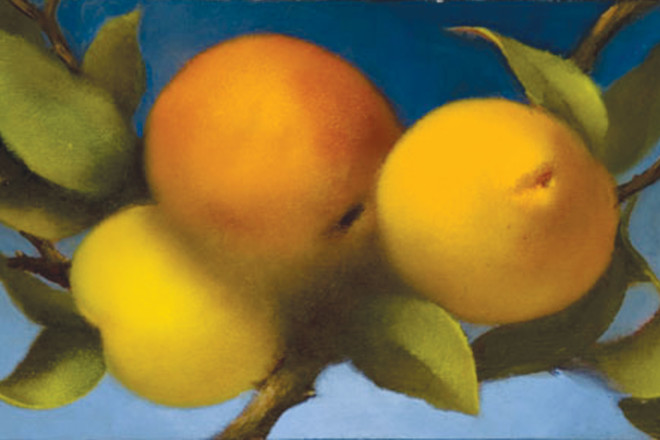 The genesis for Edgewood Orchard Galleries’ latest cookbook, An Artist’s Food for the Soul, lay in the past. “Twenty years ago my mom had the idea,” Nell Emerson Jarosh recalled, “and began gathering recipes.” But that project was eventually set aside. 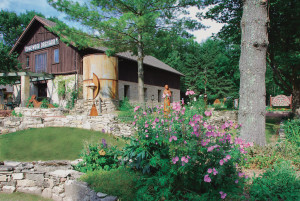 “[Our] 30th anniversary [in 1999] was really fun, with bands and tents,” she continued. “For the 35th we talked about ways to celebrate, and I thought, What if we did a cookbook?” She remembered the one toyed with years earlier. That first cookbook, An Artist’s Food for Thought, raised $75,000 that Edgewood then donated to charities that fight hunger.

In 2009, Edgewood Orchard celebrated its 40th anniversary. As Anne Haberland Emerson was planning the event, her clergyman and friend Michael Brecke suggested another cookbook as a way “to love and to serve.” Nell thought a second cookbook would be easier than the first (She was not anticipating twins!) and another collection of recipes began.

Six thousand books were printed and, because of donations, every penny raised (except for sales tax) will be given to non-profit organizations that work to benefit children.

Anne has long been an advocate of young people; she received a Governor’s Award in Support of the Arts in 1987 not only for her gallery but for her role in founding both the Door Community Auditorium and the Friends of Gibraltar. Her daughter, as a new mother, liked the concept of a fundraiser that would benefit children.

Although the cookbooks have only been available since July 2009, already sales have earned $60,000 (funds are distributed through the Door County Community Foundation). If the edition sells out, as the first did, the project will raise $150,000.

Edgewood Orchard Galleries’ 40th anniversary was especially important to the family as Anne and her husband Minnow have transferred ownership of the business to Nell and her husband J.R.The latest cookbook not only offers recipes, but glances back at the history of the art gallery. The work is a pastiche of artwork, family photos, inspirational quotations, family and gallery history anecdotes, building and grounds photos, and, of course, recipes contributed by artists and family members and friends (some of them restaurateurs), many with commentaries by the cook, Anne, or Nell. 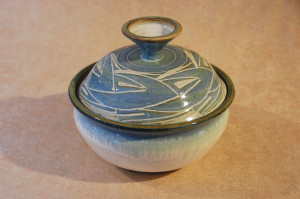 But just as a collage creates a focus with its disparate components, so do the elements of the cookbook. And the connections that appear among art and anecdotes and food delight casual readers as well as serious cooks.

The book is the collaboration of Anne, Nell, and their good friend Dan Cross, a graphic designer and photographer who owns Idea Studio; each assumed different responsibilities. Anne was the writer for the project, penning brief essays that explain the conception of the cookbook, recall the history of Edgewood Orchard Galleries, and offer personal reflections that open each section. Nell selected artwork and arranged the recipes. Dan, who has done work for the galleries in the past, donated his work (probably a thousand hours, Anne estimates).

“Philanthropy isn’t always how much money we can give,” Dan explained, “but what we can give of our talents and our time.” Anne laughed, recalling the all-nighters during the hectic pace as they “limped to the finish” in “NASA headquarters” making their deadline.

“We had a lot of fun doing it,” Nell said of working with Dan and her mother. “Sometimes we’d just break down in hysterics!”

However, the project was in reality a collaboration that went far beyond the three principals and the gallery staff. Castle-Pierce Printing in Oshkosh, a firm that has done work for the galleries for years, donated the full-color printing for the cookbook. The die cutting was gratis of Graphic Finishing in Appleton, and a portion of the binding cost by Binding Edge of Neenah. Private funds offset other expenses in the production process. And 25 businesses in Door County sell the cookbooks at no profit to themselves (although they may designate beneficiaries of funds they raise).

“[We were] good friends before we published the cookbook,” Dan said, “[but now] Anne and Nell feel like family. The most gratifying thought about the cookbook fund is it will touch the lives of many children; most we will never get to know by name, but they will be our friends, our extended family.”

“It feels good to be able to support things you believe in,” Anne added. “My whole adult life 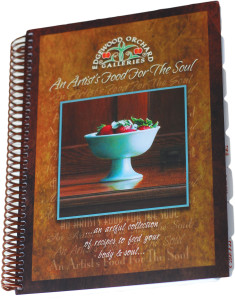 has been doing this one thing [the gallery], and when I look back, so much of my life wove through this building and the relationships that came through it. I feel the cookbook has different layers, beautiful images, but an incredible holding of friendship.”

From a very personal perspective, Anne views the book as a way to honor her mother, Irene Haberland. “I realize how great she was,” Anne said. “She wanted you to have an advantage and sparked it. Minnow and I had nothing when we started, but she never acted like it was a frightening thought. She had a flare for living!”

This cookbook  gave Anne the opportunity to look back at the wonderful coincidences that have occurred. When she left the University of Chicago Press in 1969 to join her mother in the art gallery adventure, an artist in the design department gave her a hand-rendered logo as a going-away present, the one Edgewood has used for over 40 years now. Anne was able to recently reconnect with Robert Williams, the artist, after all this time; his recipe for Chocolate Mousse appears along with the image of his design in the cookbook.

Anne Haberland Emerson has spent four decades with her galleries in Door County, loving and serving. For the inside of the back cover she chose a statement by Simone Weil that expresses her own feelings:  “To be rooted is perhaps the most important but least understood need of the human soul.”

An Artist’s Food for the Soul is filled graphically with interconnections through related images, photos, stories, and reflections, but more importantly through the artists, friends, and family whose lives have been touched by Edgewood Orchard and whose mingled roots have strengthened a community.

And the cookbook looks to the future as well as the past, because Nell and JR Jarosh, along with their three-year-old twins, continue the business.

But especially through the proceeds donated to programs and projects that add to the quality of children’s lives, the cookbook created by Anne Emerson, Nell Jarosh, Dan Cross and so many contributing people brightens the future.

Cookbooks may be purchased for $24.95 from sponsoring businesses or by visiting www.edgewoodorchard.com to print out a mail-order form.

Best-selling novelist Peter Straub and his wife Susan, friends of Anne and Minnow Emerson, are among the 120 people who contributed recipes to the cookbook.

Anne Haberland Emerson’s glance at the past:

“When people asked Irene, over 50 years ago, what on Earth she was going to do with 80 acres in Fish Creek, she replied, ‘Walk on it.’ Did she know that all three of her children would someday be living on this sacred land, as she often referred to it?

“Minnow and I – sometimes together, sometimes independently, but always with a dog – start each day with a good hike through the orchard and the woods. We go quietly, and it’s here that ideas come to me, where problems are magically resolved, and where I feel most keenly the gift and holiness of life. And in the beauty and mystery of the woods, I can sense my mother and father, and others, too, and feel their love that still surrounds us.”

“My mom made this for me before every high school basketball game. A glorified Hamburger Helper that we call Power Meal. I never ever got sick of eating it. Too bad it didn’t help us win more games!

“I also made this for myself the day before I was planning to deliver our twin girls. When my doctor told me I couldn’t eat for 12 hours before my scheduled C-section, I thought she must be joking. I was starving ALL the time! I set my alarm for 2 am and got up to eat a huge bowl of Power Meal. It carried me through…maybe that’s why our girls love it so much!”

Nell and JR Jarosh invited the physician who delivered their twins to contribute a recipe to the cookbook they were helping to compile. She agreed; Dr. Kimberly Winburn’s Danish Puff Pastry appears in the collection, along with a photograph of the newborns she helped into this world. 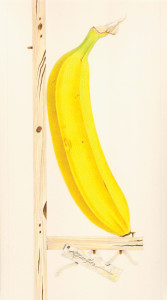 “My Grandma Alpha lived to be 103. She used to bake this banana bread when I was a boy. A couple of decades later I was living in Philadelphia and met a beautiful girl who worked for one of my clients. I asked her to go to a Billy Joel/Elton John concert. She thought it was just business, but I thought it was a date. The next day, after she received a bouquet of flowers from me, she called to say she was sorry but she was dating someone else. I relented but did not give up. Two weeks later I went to visit my parents and asked my mother for this recipe. I baked the banana bread and delivered it on Monday to Alex’s law firm. Two hours later she called to say it was the best banana bread she had ever tasted and that she had made a terrible mistake. We went out that night and two-and-a-half years later we were married. Thank you, Alpha!”

1 pound of ground or cubed beef

Salt and pepper, to taste

The filling is as varied as you want to make it. The above is one that I use most often, a celebration of my childhood. Place the beef, potatoes and rutabaga in a bowl, mix together with add salt and pepper to taste.

Roll the pastry into four 9-inch rounds. Wet the edge of the circle slightly. Place one cup of filling on half of the circle. Fold the piecrust over, stretching it until it looks like half a pie. Crimp the edge with a fork to seal it. Make vent holes in the top.

Bake at 350° for approximately 45 minutes. The crust should turn a very light golden color around the edges. 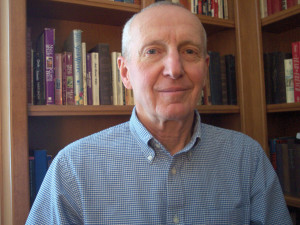 Gary Jones is a freelance journalist as well as a poet, dramatist, essayist, fiction writer, and occasional teacher of writing. After nearly 30 years of living in Door County, he and his wife have finally put down roots. (No small thing; a late orchard man once told Jones that because of the peninsula’s rocky soil he sometimes had to blast to plant trees.)