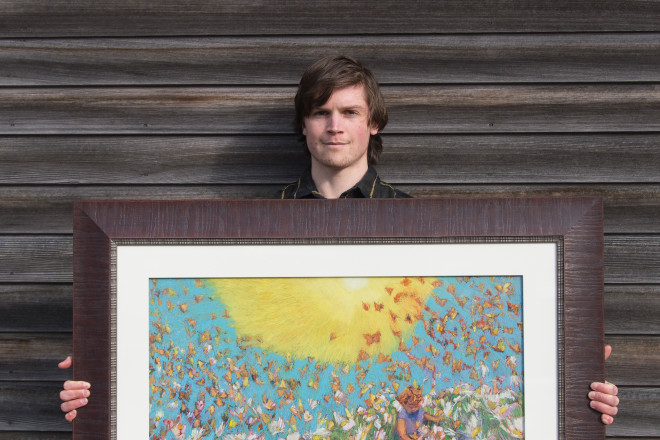 In this artist’s mind, philanthropy invoked the image of children running through a field of flowers on a sunny day, perhaps chasing after butterflies. The image was a work of Ryan Miller’s imagination, and as oil pastel was laid to matboard, the evolution of the idea and all it encompassed became a matter of fate.

As with metamorphosis, Miller let his idea transform naturally until it reached its final state – a small girl in a field of flowers, butterflies flying over and around her. One has landed on her hand as she looks on.

“Maybe the viewer will see it’s kind of the everyday cycle of life – it’s coming, swooping down on her, and touching her and it’s moving onto the great beyond and onto a future state,” Miller said.

In the process of creating the piece, particularly the rainbow of colors present in the butterflies, Miller drew inspiration from the array of cancer awareness ribbons. The young girl dons lavender clothing, the color associated with awareness of all cancers.

When the piece was complete, the greater challenge loomed – giving name to a creation whose meaning Miller was yet uncertain of. Recalling the phenomenon known as the “butterfly effect,” in which small changes in initial conditions lead to drastic changes in the result, Miller happily made the connection between the cause-effect relationship for both philanthropy and this publication’s key focus: cancer.

“Perhaps the little girl is a growing philanthropist, a caregiver. Her small chances taken and choices made now, as in the butterflies floating around her, determine the larger results later on,” Miller said. “It alludes to the arbitrary nature of the butterfly effect and asks ‘what if? why not?’ I had faith in the feeling to slightly change the composition early on. This certainly had some significance, adding up to something different than what I could have imagined had I not decided to make the change.”

The end result is a piece Miller is proud of, not only because of the experience it has provided but because of the deeply personal nature of what the artwork stands for. In the past two years, Miller has witnessed firsthand the effects of cancer on both of his parents and experienced the fortune of their survival.

“I’ve come to realize it’s very personal and something I’ll always remember when I see the cover,” Miller said. “I’m happy and honored to do it. It’s the least I can do and I hope it goes a long way. Almost as fateful as remembering the butterfly effect, my mom had given me a framed text that reads, ‘Enjoy the little things in life, for someday you will realize they were the big things.’”

More of Miller’s work can be seen at rymill.me.