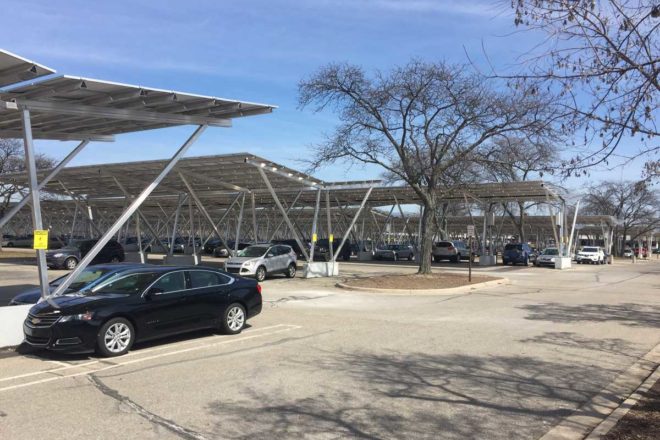 A new congressionally mandated federal report on climate change says the Midwest will be the region most affected by warming temperatures. Combined with projections of more rainfall and flooding events, declines in agricultural production, biodiversity and tourism spending are just some of the expected impacts.

The  report was produced by scientists from 13 federal agencies. The Trump administration moved the report’s release date up several weeks to Black Friday, the day after Thanksgiving, a day notorious for being the best day to release bad news in the hope it will go unnoticed by skeleton news crews and a public largely focused on holiday shopping deals.

The amount of credence President Trump puts into the 1,700-page report. Asked about the report on the Monday after its release, he said, “I don’t believe it.”

The number of times the American Birkebeiner in Hayward, Wis., has been canceled due to an absence of snow – in 2000 and 2017. The country’s largest cross-country ski race attracts 11,000 skiers to the area, providing a much needed economic boost. The mild winter of 2017 also affected ice fishing. The report states, “Projected changes in climate and ecosystems will have strong impacts on these activities.”

The number of frost-free days that are expected to increase by 2045. The report states, “Warm-season temperatures are projected to increase more in the Midwest than any other region of the United States.” It goes on to state this will be reflected in agriculture – “overall yield trends will be reduced because of periodic pollination failures and reduced grain fill during other years.”

The number of years in this century that have been the warmest ever recorded by human observation.

The percentage of the U.S. gross domestic product represented by the Midwestern economy.

The projected percentage decline of soybean yields by mid-century.

The percentage of wind power providing electrical needs in Iowa, making it the largest per capita consumer of wind power in the nation.

The percentage of Midwest electricity consumed that is provided by coal-fired plants.

The percentage of ice cover decline on the Great Lakes between 1973 and 2010 (with the exception of the 2013-14 winter). “A continued decrease in ice cover is expected in the future,” the report states.

The range in the number of additional premature deaths due to ground-level ozone concentrations by 2050.

The amount Michigan State University expects to save in the next quarter-century with new solar carports (carports with solar arrays on top), providing about five percent of the campus electricity use.

The projected annual cost of adapting urban stormwater systems in the Midwest by the end of the century, due to more frequent severe storms.

The amount the EPA estimates will be needed annually for road maintenance by 2090, due to higher temperatures associated with unmitigated climate change.

The amount of loss extreme heat is projected to bring in labor and associated losses in economic revenue by 2050. That jumps to $33 billion in 2090.