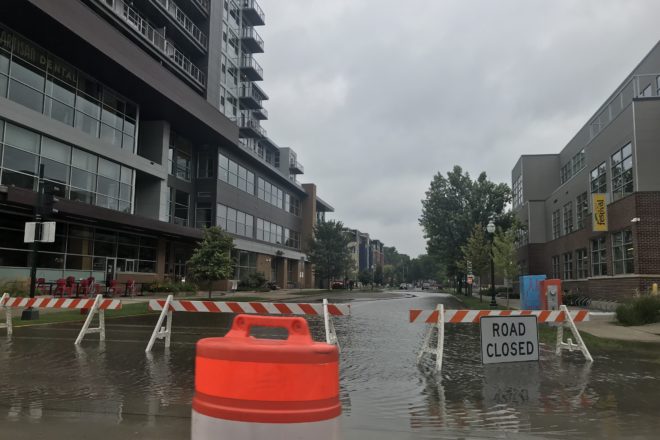 Major water events are not limited to the east and west coastal states. East Mifflin Street in Madison was closed due to flooding. With weather forecasts predicting more rain, southern Wisconsin is braced for more flooding. Madison officials said the water level on Lake Monona has reached a new record high and is currently at 7.5 inches above the 100-year flood elevation. Photo by Corrisa Bielefeldt.

“I think Norfolk is, in the long term, fighting for its existence, its very existence. And this is the part of climate change that I don’t think most Americans have really come to grips with – that virtually every coastal city is in a fight for its existence. They just don’t know it yet.”

$3 Billion
Estimated cost of the Big U, a wall of berms and public spaces proposed to surround lower Manhattan in New York City to protect it from rising sea levels and storm surges

25
Expected years before rising sea levels severely diminish functions at Norfolk Naval Base in Virginia, the largest in the world

28 million
Acres of land managed by the U.S. Department of Defense

704
Number of coastal installations managed by the Department of Defense

Sources:  The Water Will Come: Rising Seas, Sinking Cities, and the Remaking of the Civilized World; Risky Business Project