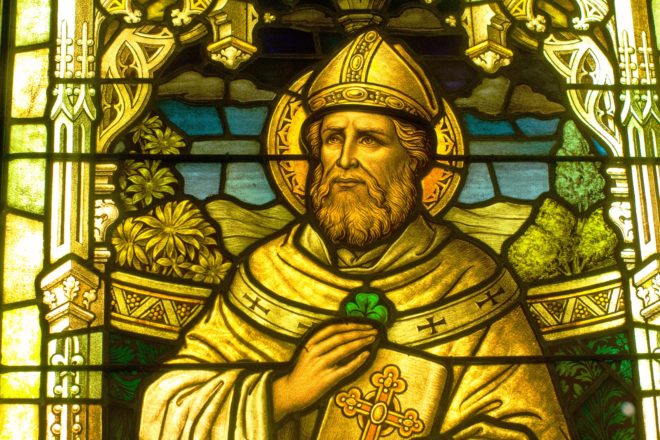 Detail of St. Patrick in a stained-glass window at the former Smith Museum of Stained Glass Windows at Navy Pier in Chicago. Public-domain image.

On March 17, people of Irish descent and millions of want-to-bes celebrate St. Patrick’s Day, most without any real knowledge of Patrick.

He was born in Dunbarton, Scotland, in 385. His grandfather was a priest and his father a deacon, but Patrick had little faith himself – that is, until at the age of 16 he was captured by Irish pirates and enslaved, working for six years as a farm laborer, until he had a vision of his own escape, which he followed and ended up back in Britain, where he became a priest, eventually returning to Ireland with the mission of enlightening the barbarians who had once enslaved him.

The legend of Patrick ridding Ireland of snakes does not hold true because there were no snakes in Ireland to begin with. But if you consider snakes to be a metaphor for paganism, well, then he did rid the island nation of “snakes,” earning himself the title of the “apostle of Ireland.” However, he is not a saint because the Roman Catholic Church never canonized him.

Legend has it that he died on March 17, 461, which is why his name is associated with that date. Although St. Patrick left no record on the subject, it can be said with a great degree of certainty that he would not have approved of green beer.

The percentage of the Boston population claiming Irish heritage, making it the most Irish-American city in the country, followed by Peabody, Mass. (15.8 percent), Albany, N.Y. (15.6 percent), and Syracuse, N.Y. (15 percent).

The number of pounds of green vegetable dye used to turn the Chicago River green between Columbus and Wacker drives for St. Patrick’s Day.

The number of countries where Guinness Stout is brewed.

The number of calories in a pint of Guinness.

The year of the first St. Patrick’s Day Parade, held in New York City by Irish soldiers serving in the English army. There are claims that Spanish residents of St. Augustine, Florida, celebrated San Patricio (St. Patrick) in 1601, but it would have been for different reasons than the Irish celebrating him in New York 150 years later.

The number of people estimated to take part in the St. Patrick’s Festival in Dublin, Ireland.

The estimated number of pints of Guinness consumed on St. Patrick’s Day.

The number of Americans who claim Irish heritage, which is almost 10 times the actual population of Ireland (4.7 million).