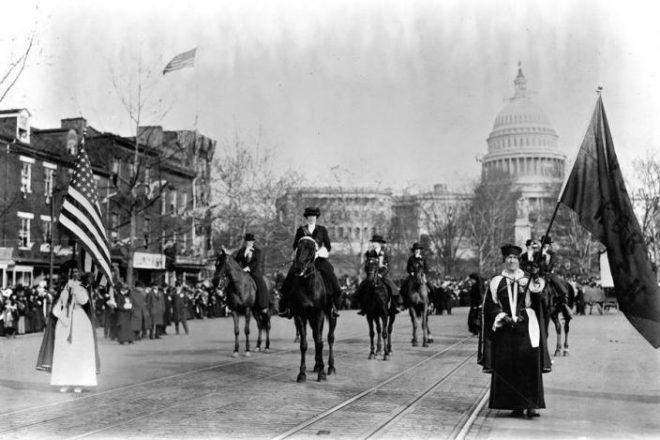 The 1913 Women’s Suffrage Parade marches down Pennsylvania Avenue, in view of the Capitol building. Public-domain photo courtesy of the Library of Congress.

On June 10, 1919, Wisconsin became one of the first states to vote in favor of ratifying the 19th Amendment, which recognized women’s right to vote.

The number of states required to ratify the 19th Amendment in order for it to become law. That happened on August 18, 1920, when it was narrowly approved (50-49) by the Tennessee House of Representatives.

The year when the first known women’s suffrage club was formed in Wisconsin, at Richland Center.

The birth year of Jesse J. Hooper, who was instrumental in Wisconsin’s early ratification of the 19th Amendment. She was a suffragist who served as president of the Wisconsin League of Women Voters. In 1922, she ran for a seat in the U.S. Senate but lost to Robert La Follette.

The year when the Wisconsin Legislature passed a law allowing women to run for school boards and vote in school-board elections.

The year when the Wisconsin Woman’s Suffrage Association began holding annual conventions. The organization was formed in 1869.

The year when the Wisconsin Woman’s Suffrage Association successfully lobbied the Legislature to hold a statewide referendum on suffrage. Wisconsin men voted by a 63 percent majority against it. One explanation is that the suffrage movement was often connected to the temperance movement.

The year when the legislature authorized another suffrage referendum, but Gov. Francis McGovern vetoed it.

The year when Gov. John Blaine signed the women’s rights bill, making Wisconsin the first state to give women equal rights with men under civil laws.