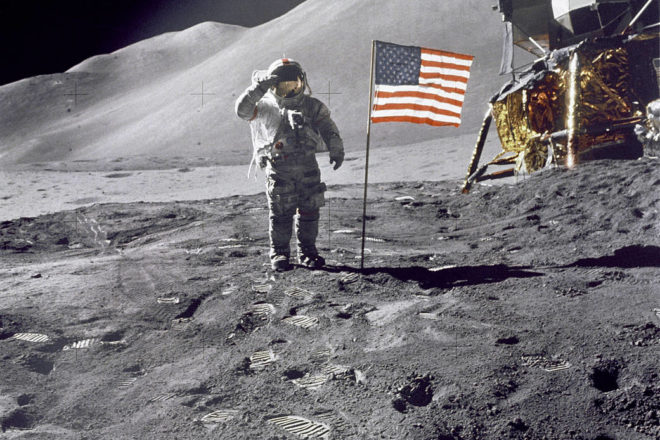 Apollo 15 Commander Dave Scott salutes the American flag at the the Hadley-Apennine lunar landing site during the 1971 lunar landing. The Lunar Module Falcon is partially visible on the right. Photo courtesy of NASA.

With the Fourth of July just around the corner, let’s take a look at flags that have flown on these shores.

The number of red and white stripes on the American flag. However, an act passed in January 1794 grew the number of alternating stripes to 15.

The number of official versions of the American flag that have flown since 1777.

The number of stars on the flag when Wisconsin was added on July 4, 1848. It remained with 30 stars until July 4, 1851, when California entered the union.

The year American ships in New England flew a Liberty Tree flag, showing a green pine tree on a white background with the words “An Appeal to Heaven.” The Continental Navy also began flying the red- and white-striped “Don’t Tread on Me” flag with a snake splayed across it. The Sons of Liberty flag was also introduced this year, and was the same as the Navy’s flag, without words and the snake.

The year of the Flag Resolution that stated:  “Resolved: that the flag of the United States be made of thirteen stripes, alternate red and white; that the union be thirteen stars, white in a blue field, representing a new Constellation.”

The year Charles Thomson, secretary of Congress, described the significance of the colors of the Great Seal of the United States (two years after the original flag design), which has since been applied to the flag as well:  “White signifies purity and innocence; Red, hardiness & valour; and Blue, the colour of the chief, signifies vigilance, perseverance & justice.”

The year Francis Scott Key composed “The Star-Spangled Banner.” The 15-bar, 15-star flag he wrote about flying over Fort McHenry is one of the few remaining specimens of that version of the flag, and what is left of it remains on permanent display at the Smithsonian National Museum of American History. A 2”x5” swatch was cut from the flag in the 1800s and sold at auction in 2011 for $38,000.

The year another act returned the number of alternating stripes to 13. It also allowed for a star to be added to the flag on the 4th of July following the admission of each new state.

The year that Betsy Ross’s grandson began making claims that his grandmother was the mother of the first American flag. While the story passed down through family history has become a part of the American myth, there is not a single letter, diary entry or bill of sale to corroborate the claim.

The year of the Executive Order of President Taft, establishing the proportions of the flag and providing the arrangement of stars in six horizontal rows of eight each, with the single point of the star facing upwards.

The year President Harry Truman signed an Act of Congress designating June 14 of each year as Flag Day.

The year of President Eisenhower’s Executive Order providing for nine rows of stars staggered horizontally and 11 rows staggered vertically. He chose the design of 17-year-old high school student Robert Heft of Lancaster, Ohio, from among 1,500 entries, for the flag as it is known today.

The year the first American flag was raised in outer space, when astronaut Neil Armstrong planted a flag on the moon during the July Apollo mission to the moon. Five more Apollo moon landings – 12, 14, 15, 16 and 17 – resulted in five more flags planted on the lunar surface.

The year a Constitutional amendment on flag desecration failed by one vote in the Senate. The amendment would not only have prohibited burning of the flag, but would have prevented its image from being printed on disposable items such as t-shirts and napkins.