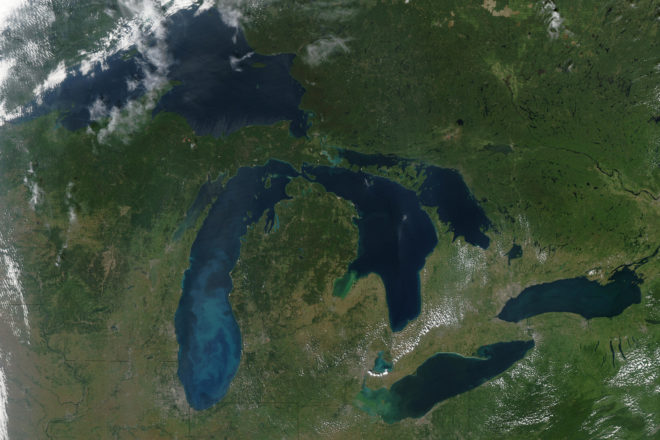 Lake Superior covers the upper-left corner. Beneath it is Lake Michigan, and to the right is Lake Huron. Under Lake Huron is Lake Erie, to the left, and Lake Ontario, to the right. The pale-blue swirls in Lake Michigan are probably caused by a phytoplankton bloom or calcium carbonate (chalk) from the lake’s limestone floor. Photo by Jeff Schmaltz, MODIS Rapid Response Team, NASA/GSFC.

The Great Lakes face many challenges, almost all of them human-made problems.

The percentage of water in the five lakes that turns over annually, meaning pollutants are likely to stay in place.

The number of miles from Lake Michigan that an adult Asian carp was found in 2017. It had gotten past electric barriers that serve as the last line of defense in keeping the voracious carp out of Lake Michigan.

The number of invasive species that have been introduced into the lakes since the early 1900s.

The number of contaminants identified by the EPA in the Great Lakes system. Only about a third of them have been evaluated for their effects on wildlife and human health. Eleven have been identified as “critical pollutants” requiring immediate attention because they bioaccumulate in organisms and persist in the environment. That list includes PCBs, DDT and mercury.

The year the invasive sea lamprey had officially invaded all five Great Lakes.

The year the rule was adopted calling for oceangoing ships to flush their ballast tanks before entering the Great Lakes system. Invasive species had been entering in ballast water.

The number of pounds of plastic pollution that enters the Great Lakes each year, according to scientists at the Rochester Institute of Technology.

The number of people who live in the Great Lakes watershed in eight U.S. states and two Canadian provinces.

The number of gallons of untreated human sewage sent into the lakes annually as the result of rainstorms and failed septic systems.