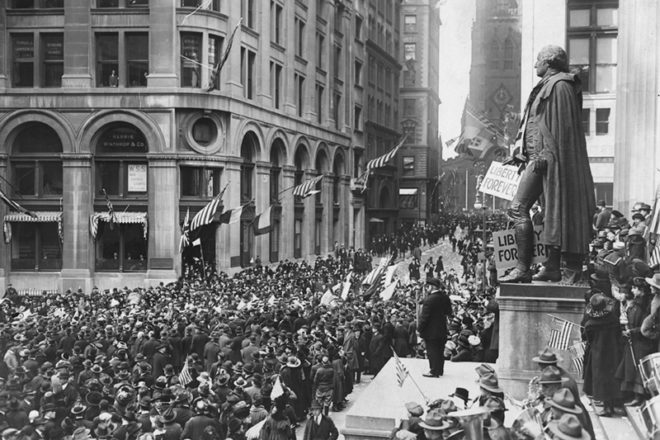 We take a look at numbers surrounding the U.S. legal holiday dedicated to American veterans.

In 1918, on the 11th hour of the 11th day of the 11th month, a temporary cessation of hostilities – or armistice – was declared between the Allied nations and Germany. It has long been seen as the end of World War I, even though the war did not officially end until the Treaty of Versailles was signed on June 28, 1919.

The year U.S. Congress passes a resolution that the “recurring anniversary of [Nov. 11, 1918] should be commemorated with thanksgiving and prayer and exercises designed to perpetuate peace through good will and mutual understanding between nations.” Twenty-seven states had already made Nov. 11 a holiday.

The year an act was approved designating Nov. 11 a federal legal holiday “dedicated to the cause of world peace and to be hereafter celebrated and known as ‘Armistice Day’.”

The year Congress changed the name from Armistice Day to Veterans Day, after intense lobbying from veterans’ service organizations, who had in their corner the fact that the greatest military mobilization this country has ever seen – 16 million people – came during World War II.

The year Congress passed the Uniform Holidays Bill, which ensured three-day weekends for federal workers and encouraged travel and tourism throughout the country by designating that four federal holidays always fall on Monday – Washington’s birthday, Memorial Day, Veterans Day and Columbus Day. Martin Luther King Jr. Day has since been added to the list of federal holidays.

The year Veterans Day was moved to the fourth Monday in October. States refused to recognize the new federally approved Veterans Day in October and continued to observe it in November. Recognizing the error of its way, the feds relented and President Gerald Ford signed a law officially returning Veterans Day to Nov. 11 beginning in 1978.

The number of female veterans in the United States (2016).

The number of veterans with service-related disabilities (2016).

The number of veterans who served in the Gulf War (from August 1990 to the present).

The number of veterans who voted in the 2016 presidential election, resulting in a 69.6 percent rate for veterans compared to a 60.6 percent voting rate by non-veterans.

The number of military veterans in the United States (2016).