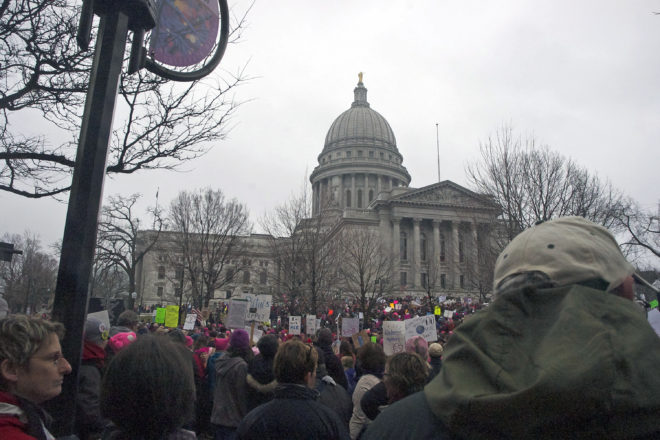 Crowds in front of the state Capitol during the Madison Women’s March on Jan. 21, 2017. Photo by Jim Lundstrom.

In honor of the Capitol celebrating its 100th anniversary, we present some numbers about the center of state government.

The Capitol is and will remain the tallest building in Madison. Legislation prohibits buildings from being taller than the 187-foot columns surrounding the Capitol.

It is the third Capitol building since statehood in 1848. Government outgrew the first building, so a second Capitol was built between 1857 and 1869, and was expanded with two wings in 1882. That building was destroyed by a fire in February 1904. Construction on the present Capitol began in 1906.

The height in feet of the “Wisconsin” statue on the dome. Sculpted of hollow bronze in 1920 by Daniel Chester French of New York, the statue weighs three tons. On top of the bronze is a coat of lead zinc oxide, then oil paint, and it is finished with 22-carat gold leaf. The original cost of the statue was $20,325.

The number of types of stone that were used to build the Capitol.

The height in feet of the Capitol.

The year the legislature met for the first time in the newly constructed west wing.

The year rotunda construction began. It was completed in 1915.

The Capitol is completed, but a dedication ceremony is put off because of World War I.

The first annual Capitol Christmas Pageant is held. The first year it was held outside, but has been held in the Capitol ever since.

The year government outgrew the Capitol and built an office building on Wilson Street.

The year the “Wisconsin” statue is cleaned and regilded at a cost of $444.

The year a 12’x13’ “W” with 250 red light bulbs is erected on the dome and aimed at State Street on football weekends. It was permanently removed in 1942 as a conservation measure.

Governor Warren Knowles holds the Capitol dedication ceremony on July 7 of this year, 48 years after its completion.

The year the Department of Public Instruction leaves the Capitol building, marking the first time a cabinet member does not have a Capitol office.

The year the State Building Commission approves more than $1 million to restore the original cherry wood windows, rather than replace them with cheaper, energy-efficient aluminum windows.

The year the $8.9 million renovation of the rotunda began. The work was completed in October 1998.

The year the Capitol was designated a National Historic Landmark.

The cost of the first electric voting machine in the world that was installed in the Assembly Chamber in 1917.

The estimated number of people who paid respects to Robert “Fighting Bob” LaFollette as he was lying in state in the Capitol after his death on June 18, 1924 death.