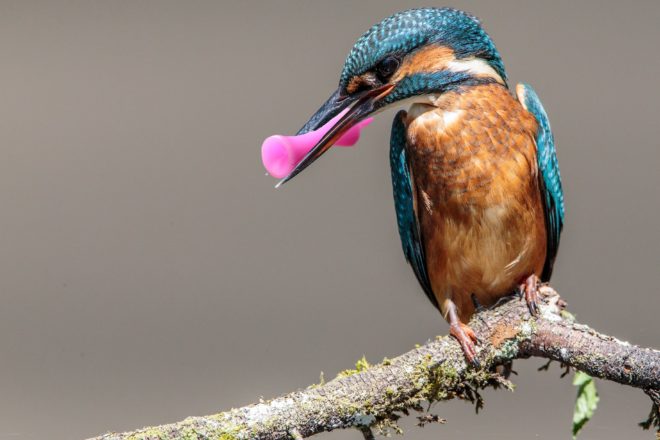 A kingfisher with a piece of plastic in its beak. Photo courtesy of worldmigratorybirdday.org.

In honor of World Migratory Bird Day on May 11, we look at some numbers related to the annual celebration of birds. Each year has a theme, and this year’s is “Protect Birds: Be the Solution to Plastic Pollution.” How can you help? Limit your use of plastic materials; replace them with eco-friendly alternatives; and support local and global action against plastic.

The percentage of seabirds estimated to have plastic in their guts.

The percentage of plastic that is discarded as waste instead of being recycled.

The number of countries that have observed World Migratory Bird Day.

The year the United Nations established World Migratory Bird Day, set for the second weekend of May, to raise awareness of the migratory links among regions of the globe. It’s an effort of the UN’s Agreement on the Conservation of African-Eurasian Migratory Waterbirds, an international treaty to conserve migrating bird species. The treaty covers 254 species.

The estimated number of seabirds killed by ingesting plastic annually.

The number in tons of plastic waste estimated to enter the world’s oceans annually.

The number in tons of annual plastic production.