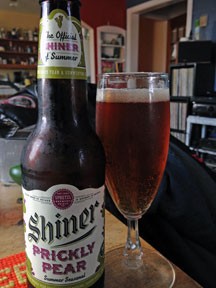 Shiner Prickly Pear Summer Seasonal. This lager has a very fruity aroma, but I can’t identify the fruit, perhaps because I am unfamiliar with the prickly pear. The aroma is tantalizing and screams summer to your brain. The color is deep golden-honey with a finely bubbled head that billows and implodes, leaving a thin white rim behind.

It’s got a tart little bite that spreads to what must be the big Texas flavor of prickly pear, and then everything settles down to beer. I like it. 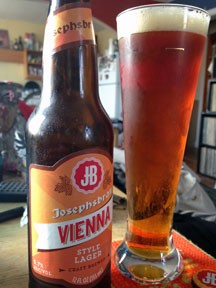 Maybe I’m a little slow, but when I was given a bottle of JosephsBrau Vienna Lager and was told that it came from Trader Joe’s, well, I didn’t get the name right away. But, then, I have never been to Trader Joe’s, so did not know that there is a whole family of Trader Joe’s beers, contract brewed by the Gordon Biersch Brewing Co.

I recently renewed my distaste for red ales when one was recently recommended. I couldn’t drink it. I find reds just too cloying. A Vienna lager is a happy medium. Perhaps the best-known Vienna-style lager is Negra Modelo. The style should be malt-forward. JosephsBrau certainly is that. Make sure to pour it into a tall pilsner glass to be entertained by the cascading carbonation of this beer. 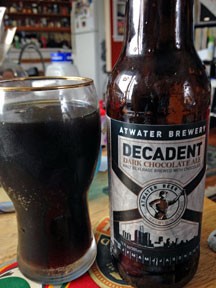 Decadent Dark Chocolate Ale from Atwater Brewery of Detroit. I would have enjoyed this beer a lot more if it had retained any sort of head, but it did not. It just sat there looking like a glass of still swamp water, with a few random bubbles rising to the top out of the murky depths. Felt carbonated in the mouth, but it looked as lifeless as dishwater. Although not specifically identified as such, I think this is supposed to be a stout. Seems thin for a stout. The taste is more cacao than dark chocolate, and it is a deep component of this ale. I bet this stuff would taste great in a Devil’s food cake.