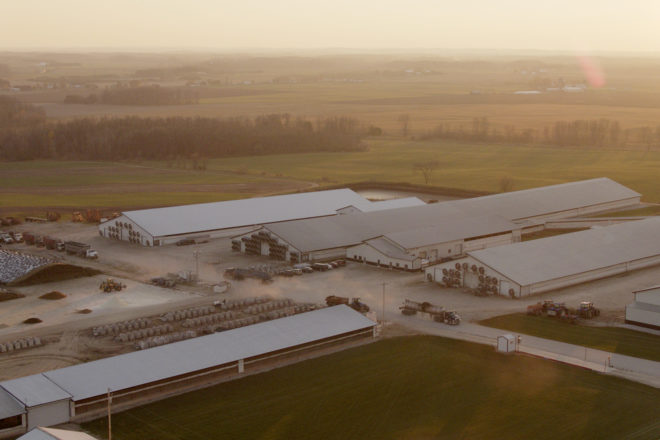 When the husband-wife filmmaking team of Annie Speicher and Matt Wechsler made the highly praised 2016 documentary Sustainable (now showing on Netflix), they heard a lot about Concentrated Animal Feeding Operations (CAFOs).

“But we were hearing all the classic arguments of animal-welfare issues or environmental issues,” Wechsler said. “We were not hearing at all about the contamination of private homes or the well water or the air pollution that’s unregulated, the high rates of cancer and asthma and other respiratory illnesses that are affecting residents of the areas where these factory farms are most prevalent. Nobody is reporting on any of that.”

So for their next project, they decided to take on those issues. The result, Right to Harm, has its Wisconsin debut at Crossroads at Big Creek in Sturgeon Bay May 30, and its Kewaunee County debut the next night. The Kewaunee County screening is particularly significant because it’s one of the five rural communities featured in the film – and perhaps the only one where cows far outnumber people.

But it really all began with Sustainable.

“That was really a passion project as we were both really interested in food and local food production and the dichotomy of what’s going on in kind of a larger sense,” Wechsler said. “Along the way of making that film, we did an interview with John Ikerd [a University of Missouri professor emeritus of agricultural economics], who starts and ends this film. He introduced this side of agriculture, this kind of dark side that nobody’s talking to and [that] affects the residents who live near these large CAFOs or factory farms. We felt that we needed absolutely to make a film about it, so it became the follow-up film.”

Contacting people they had met in making the first film, they asked who they should talk to for the new documentary.

“Every time it led us down the path to the next person,” Wechsler said. “We saw a pattern emerge very quickly. When we realized the problem was happening everywhere, we knew we wanted to find characters across the country. We also wanted to find characters across the political spectrum, the socio-economic spectrum and the racial spectrum to show that it really is a problem affecting everyone.”

“We did the most filming in Wisconsin, between Kewaunee County, a little bit in Door County – actually the very first scene after the credits is Door County – and then Bayfield, some in Madison, to show that it’s really a statewide issue and that there’s this statewide coalition attempting to do something about it,” Wechsler said.

Sandy Winnemueller, who works as a critical-care nurse at a hospital in West Bend, is among the Kewaunee County people who appear in the documentary.

“I live in Lincoln Township, where we have so many of the water-quality issues that Matt talks about in the film,” she said.

Winnemueller is one of the five Lincoln residents who has been involved since 2011 with a lawsuit against expansion at Kinnard Farms. Last month, the Wisconsin Supreme Court announced it would take up the case at the request of the State Court of Appeals, which said the case should be heard by the state’s highest court because the decision will apply statewide.

“Arguments are going to be heard shortly,” Winnemueller said. “It’s been eight years now.” All levels of government, from local to state, have been dragging their feet on the CAFO issue, she said.

“They always say, ‘We’re waiting for more studies.’ Let me tell you, we have studies coming out our ears. We know where the problem is coming from.”

Winnemuelller said her well has tested positive with contaminants so many times that “my property here is basically worthless. Why would anybody buy it?”

These sorts of frustrations are echoed throughout Right to Harm by residents of other communities in other states where factory farms have been established. Wechsler said the film has been warmly welcomed by folks in that situation.

“Those that have been affected by this issue, they love the film,” he said. “They say, finally there’s a film that speaks to the issues I’ve been telling people about forever. Nobody was telling their story, and here we were able to tell their story.”

But, he adds, “It’s kind of a mixed bag of receptions. It’s tough to deal with as a filmmaker. You want everyone to love the film. There are arguments against the film on many sides.”

Vegans want more from the animal-cruelty perspective. Urbanites want the corporations that process the meat they buy in supermarkets skewered. Some who support large-scale farming ask, how do we feed the world?

“Those stories have been told,” Wechsler said. “We were really trying to break new ground with the conversation about food.”

So he asks that people arrive with compassion and open minds when they view the documentary at the two local screenings.

“An open mind that asks them to question, do we have to produce food in a way that is damaging to some of our citizens? Is it necessary? Is there another way to do it?” he said. “I’m just trying to move the conversation forward.”