Ericka Routhieaux thinks of her family as canaries trapped in a coal mine. Twenty years ago when they moved into a small, blue house in the town of Lincoln, the surrounding landscape was dotted with farms. As the years ticked by most small farms either grew or shut down. 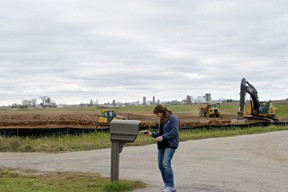 As Ericka Routhieaux gets her mail across the street from one of 15 CAFOs in Kewaunee County, she’s reminded, “I have two choices: live unhealthily or move.” Photo by Len Villano.

Now, the scene out the family’s front window is drastically changing. Across the street bulldozers kick up dust, transforming what was once an open field into one that will collect water that runs off a farm with 5,800 cows.

“I have two choices: live unhealthily or move,” Routhieaux said.

Kinnard Farms, the Confined Animal Feeding Operation (CAFO) across the street, is expanding. It received a permit for a Pollutant Discharge Elimination System, or system of addressing waste and runoff, from the Department of Natural Resources (DNR) in August.

Kinnard Farms is one of 15 CAFOs in Kewaunee County. When the expansion is done, it will go from 2,700 to 5,800 cows, from 39 to 63 full-time employees and will double its milk production, according to part-owner Lee Kinnard.

Routhieaux, her husband and a group of six other families and residents of Lincoln are fighting the expansion, what some would call a losing battle. They’ve filed legal action with the DNR, alleging the department didn’t have enough information to issue a permit.

“We’ve been very open with this process from the get-go,” said Kinnard. “We’ve invited these people to come and speak with us. We met with several of them. The remaining core group has really broken off conversations.” 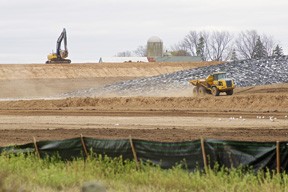 Bulldozers and trucks work on grading the landscape as part of the Pollutant Discharge Elimination System for Kinnard Farms expansion, which will increase the number of cows from 2,700 to 5,800. Photo by Len Villano.

“It’s a fairly narrow legal issue, so really the citizens are challenging the adequacy of the permit in meeting the standards it’s supposed to meet about preserving public health,” Wright said.

The DNR only issues permits related to water and waste. They require CAFOs report annually about manure spreading practices, and every five years come out to check up on operations.

“A lot of complaints within the petition are about how [the expansion] is going to affect their quality of life,” said Casey Jones, DNR wastewater specialist. “They’re concerned about water quality, wildlife. They’re concerned about odor, noise, traffic. While that’s certainly going to be something that comes with an expanded farm facility, most of the things in here the DNR doesn’t have the authority to regulate.”

“It’s not a requirement to have the plans and specs approved before we issue the permit to have animals onsite,” Jones said.

Arguing over permits is one of the only things the group can do, but their real concern is about health and safety.

“[We want] safer, healthier practices for not just the immediate area, because it’s going to [have effects] countywide,” said Lynda Cochart, who signed the legal action. She and others are hoping for better protection of groundwater, as well as more regulations and oversight by the DNR. 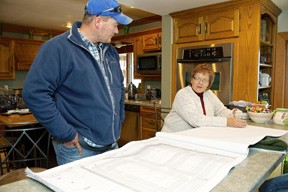 Lynda Cochart and her son Cory are among residents of Lincoln that have filed legal action with the DNR regarding Kinnard Farms’ expansion plans. Photo by Len Villano.

The Routhieaux’s well tested high for nitrates, a compound found in manure and chemical fertilizers that can cause “blue baby syndrome,” when blood can’t carry oxygen around the body in infants with high exposure. Nitrates are also associated with cancer, thyroid disorders and birth defects for people with a history of low exposure.

But because nitrates are common in Wisconsin and may not have come from Kinnard Farms, the Routhieaux family can’t do much about the contamination.

“It could be that because of the background in agricultural in that area that’s why her wells are high in nitrates,” Jones said. “There’s no really specific source we could point at.”

If the Routhieaux well was contaminated with bacteria like E. coli, Jones said it would be easier for the DNR to take action.

But the Routhieauxs are going to be very, very close to the farm, Jones said. They’ll look out their front window and see a huge feed pad, maybe a manure retention pond.

“They’re certainly going to be looking at a very large farm,” Jones said.

Kinnard said he’s made voluntary changes to the expansion plan according to community requests, like lining the proposed manure pit with concrete and clay instead of just clay.

Petitioning residents would like to see a methane digester or wastewater treatment facility, but Kinnard doesn’t plan to consider them.

“It makes absolutely zero economic sense,” he said. “Studies coming out actually indicate very negligible [reduction of], or possibly even more, odor from those types of facilities.”

Aside from the petitioning residents, Kinnard said his operation has gotten support from the people in this agricultural area. He said buying land from local farmers has helped many retire, and expansion is a win-win situation.

The petitioners disagree. They say they’re thinking about Lincoln, about the people and cows who live and work there, about the Kewaunee River that runs into Lake Michigan, about the wildlife that call it home.

“Times change and growth has to come, but you also need growth of a township,” Cochart said. “You need population to grow for prosperity to continue, and I think we’re going to lose our population.”