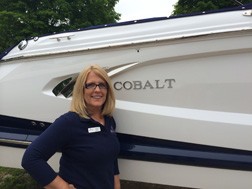 After a successful 42 years in business, Cal Marine of Sister Bay has officially changed its name to Beacon Marine.

“We chose the name ‘Beacon Marine’ because it represents our commitment to helping guide peoples’ boat-buying decisions, so they ultimately purchase the right boat for their specific wants and needs. At Beacon Marine, we give customers the confidence they need to feel comfortable with every aspect of boat ownership and operation,” says managing partner James Matson. Four years ago, Matson joined Cal Marine as a lead partner alongside longtime owner and founder, Cal Lundquist. With Lundquist looking to take a step back and enjoy his retirement years, Matson completed a full buyout of Cal Marine in November 2013.

Changing names isn’t the only new development at Beacon Marine. Beacon hired a new general manager, Connie Carlson, to oversee its Door County operations and purchased additional acreage in Sister Bay. Carlson is a nearly 30-year marine industry veteran with a background in both sales and operations management. In 1996 Carlson shifted her primary focus from operations and logistics to boat sales and since that time, Carlson’s annual sales have exceeded $1.5 million at least four different times, earning her recognition as a Top 10 salesperson in the nation.