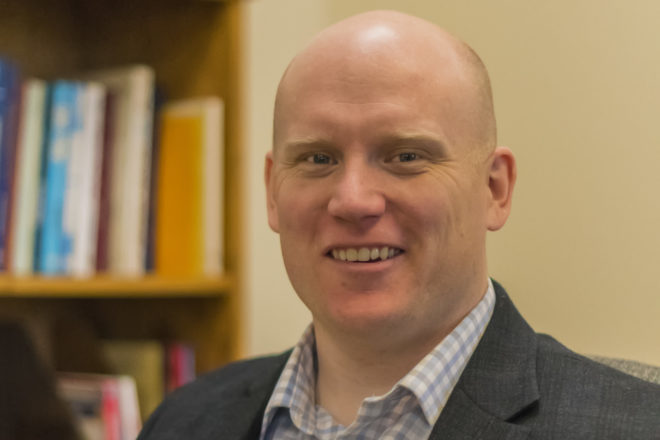 It’s a bit too early to refer to him as Secretary Caleb Frostman because he still has to go through Senate confirmation, but the former 1st District senator and executive director of the Door County Economic Development Corporation is looking forward to taking the reins of the Wisconsin Department of Workforce Development (DWD).

“It was kind of a logical fit,” Frostman said on the Friday before Gov. Tony Evers, who appointed Frostman to the post, was sworn in as the 46th governor of Wisconsin on Jan. 7. “If you look at all the levers that we have available to us to improve the economic standing of Wisconsinites, Workforce Development is certainly one of them.”

When Frostman lost the November election to Republican Andre Jacque, after serving just a few months following a special election, he hoped to remain in Door County. But it was also apparent when he appeared with gubernatorial candidate Tony Evers at an event in Sturgeon Bay that the two had a rapport that would likely lead to an appointment in Madison.

“I thought about other economic development jobs in the area, a couple of administrative positions in municipalities that were somewhat appealing. I started some of the conversations, but this came together pretty quickly,” he said. “It’s bittersweet. Mixed emotions. You get established in a place, make friends, put some roots into the community. That will be a tough part, leaving Sturgeon Bay.”

However, he is excited about what he feels may be a bipartisan embrace of governing Wisconsin rather than the hyperpartisanship of the last eight years under Scott Walker, especially with what appears to be a more conciliatory tone from Republican leadership.

“Both sides realize it would be a very, very long four years if people are just obstructing,” Frostman said. “I think Wisconsin is just tired of the bickering, too. I think there’s a strong public sentiment to come to agreement. Most of the feedback on cabinet secretaries has been pretty positive. It’s nice to see it’s not just bickering on every decision. I’m encouraged by that.”

Frostman said it’s time to look at a bigger picture than jobs numbers when it comes to workforce development.

“People look at workforce recruitment, and that’s important – get new folks in, keep them there and help them advance once there – but also a comprehensive look at what works and what’s not working,” he said. “It’s a bigger picture than just making sure folks are not just in a job, but also in a job that works for them and that they can afford a dignified life. I want to work with the legislature to find solutions.”

There are many arms to the work of the DWD, with a total of 1,670 positions across the state, and 1,450 of those positions are filled now.

“It’s a big department,” Frostman said. “Employment and vocational training and rehabilitation are the two big ones. The unemployment piece can triple in times of recession when you have much more demand for those services,” he said.

He expects to visit job centers around the state and attend economic development events to get to know the staff. He also has the opportunity to appoint a number of positions, such as deputy secretary, assistant deputy secretary, communications and legal staff members, and legislative liaison.

“We’ll likely keep a few of those folks,” he said, but added that 2,000 people applied to work for the new administration and some of them specifically for DWD.

“I’m feeling optimistic,” he said. “Just make sure you’ve got a good team built around you.”

The last time a Door County resident was named to a state cabinet post was in December 1959 when Ellison Bay farmer and Democrat Harvey Grasse was chosen by Gov. Gaylord Nelson to serve as chair of the state High Commission, precursor of the Dept. of Transportation. Grasse served in that role through 1964, until Republican Warren Knowles was elected governor. He went from there to working as a highway specialist in the Department of Indian Affairs until 1966 when he was named to another federal post, running Wisconsin’s Rural Community Development Service.