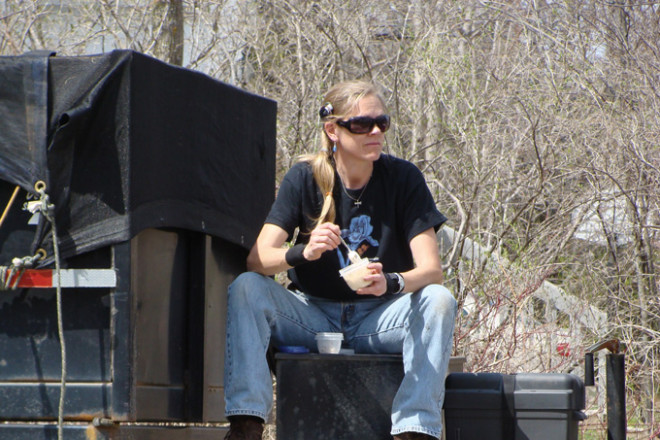 Walking inside the Baileys Harbor home of Caleb Whitney and Kristen Peil, one gets a sense of what kind of people they are. The house is open and vibrant – bright coats of yellow, blue and green coat the walls where artwork hangs – and work projects and papers take up space in the living room and kitchen where the two come to relax. 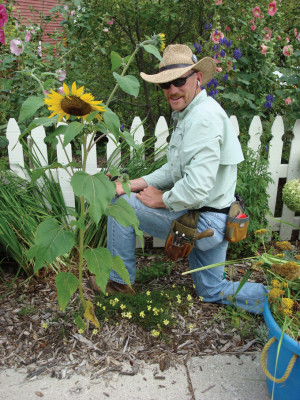 Amidst their belongings, however, two aspects of the house tell a more nuanced tale:  it is old, far older than its owners, and it is still a work in progress. And those two things, history and progress, exemplify what Caleb and Kristen are about.

For Kristen, her history with Door County reaches all the way back to the 1880s when her great, great-grandfather Carl Peil came to Baileys Harbor. According to Kristen, it didn’t take long for the family to, quite literally, take root in the community.

“There are all kinds of trees planted along County F and EE from the town hall, and where the road divides between F and EE there are maple trees on both sides,” she says. “My great, great-grandfather planted all those trees.”

Through every generation, it seems that there has always been at least one Peil who worked with the land, whether it was Hedwig Peil tending to the community’s gardens or Roland Peil working out of his gravel pit. Caleb and Kristen have photographs and stories for each of them.

Those photographs and stories are important to both Caleb and Kristen, but for different reasons. For Kristen, they are her family, a legacy that she can trace back five generations. And for Caleb, they create a connection to a place that he didn’t have before he got to Baileys Harbor. 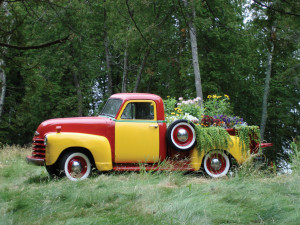 Caleb, who grew up in Baraboo, is a native of southern Wisconsin, but he didn’t have family there. After attending school in Iowa and traveling through Europe, he came to Door County in 1992 as “a typical interloper,” according to Kristen, complete with long hair and a hippie car. But the interloper quickly became part of the community.

When he arrived, Caleb started working at Al Johnson’s, a place that he says made the most sense to him out of all the places he had been in his life.

“I found I really enjoyed that kind of hard reality of work,” he says. “That old-school kind of honest day’s labor for an honest day’s pay. It connects you to reality.”

He ended up buying the house on Highway 57 in Baileys Harbor, where he now lives with Kristen, in 1994. In 1996, he joined the Baileys Harbor volunteer fire department after he saw Kiehnau’s Service, the car maintenance shop across the street from his house, go up in flames. He’s since become one of the department’s top responders and the highest certified firefighter in Baileys Harbor. 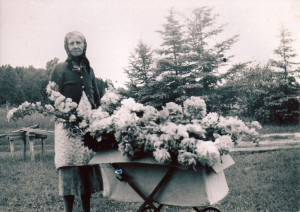 But between those two events, in 1995, something else happened, something that would tie Caleb to Baileys Harbor forever.

He met a girl.

The two began dating, and then working together in the landscaping business under a mutual boss. After a couple years, they had an idea.

Despite, or perhaps because of, their ignorance, Caleb and Kristen launched their own commercial landscaping company called Green Side Up in 1998. The business is, and always has been, staffed by just the two of them, and it serves as an outlet for their unique vision of landscaping, which includes tree men, copper fountains, and scarecrows.

“They’re always thinking of things outside the box,” says Nathan Nichols, who owns Nathan Nichols and Co. and is both customer and neighbor to Caleb and Kristen. “They’ll tell me about all these 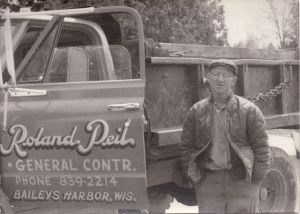 things, and I’ll always say, ‘I’m leaving it up to you’ because that’s their area of expertise.”

But while Green Side Up is about moving the concept of what you can do with landscaping in Door County forward, it’s about even more than that to Caleb and Kristen. It’s also about history, creating a link back to all those Peils of the past that used to work the land.

“Really, what it comes down to is, we’re still in Roland’s gravel pit,” says Caleb. “It’s part of our business now. We’ve moved half a mile from the original homestead, and we’re doing the same thing basically:  running a dump truck full of materials.”

Caleb and Kristen can’t landscape forever, though, and lately they’ve been thinking a lot about what’s next. While they haven’t quite figured out what that will be, they’re content to keep landscaping and focus on making sure that the sixth generation of Peils, their 12-year-old daughter Ida Augusta (named for two immigrant Peil women), knows where she comes from.

“There’s that concept of legacy,” says Caleb. “She’ll always be tied to Baileys Harbor. As a parent, you have no idea where they’re going to end up, but you try to give them some background.”

Between raising Ida, running a business, helping out in the community, and working to revamp their house – “We’re on year 18 of the three-year plan,” jokes Caleb – they have been kept pretty busy, pretty constantly, but they don’t mind. To Caleb and Kristen, it’s all a part of their lives in progress.